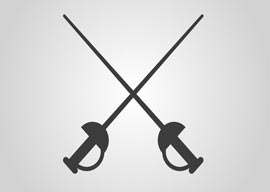 There is an English writer who is going around telling all and sundry that I made a pass at his wife. Now, Englishmen are known not to get too excited about such matters, but in this case the man is simply showing off. I can”t for the life of me think what else this is all about, because I have never met his wife, or if I have, I have certainly never made the slightest pass at her. Although this is not very gallant on my part, when I was informed what that creep was going around accusing me of, I asked what the wife looked like. “Not someone you”d actually make a pass at” was the kindest of judgments.

Never mind. The reason I write about this individual, who has never had the courage to come up to me with his complaint, is because at an earlier age I would not be crying foul in this august journal. I would have challenged him to a duel, he would have had the choice of weapons, and I would most likely have kneecapped him or run him through the shoulder, allowing him to live out the rest of his days in painful awareness that one should get their facts right before going around blackening men’s names. Alas, those days”or dawns, rather”are long gone. Mind you, it could also have gone the other way round. It could have been the poor little Greek boy who ended up dead, but judging from what would happen in a fight today, I think I would have been the favorite 200 years ago.

“Judging from what would happen in a fight today, I think I would have been the favorite 200 years ago.”

A duel came to mind because of this crybaby’s whining, but it also has to do with a new book called TouchÃ©: The Duel in Literature, by John Leigh. Duels among writers come in very handy. They have an opening, a dramatic middle, and a conclusive finish. Novelists love duels. I believe it was Joseph Conrad who wrote the short story on which that wonderful Ridley Scott film The Duellists was based. Harvey Keitel was simply terrific in portraying a crazed French officer who keeps challenging a fellow captain in Napoleon’s army until he gets his comeuppance. Leigh writes that the first duel was between Achilles and Hector, the noblest Greek versus the noblest Trojan. Neither of them were writers, that’s for sure, but what the hell, all warriors are writers, at least in my book. Pushkin, of course, the greatest poet ever, died in a duel instigated by him against a French officer serving in the tsar’s army, over the latter’s flirting with the poet’s beautiful wife. Pushkin was mistaken. D’AnthÃ¨s married Pushkin’s wife’s sister, trying to avoid a duel, but still Pushkin persisted. They used to say he was as jealous as Othello and twice as dark. The Frenchman shot first and aimed low, hitting the poet’s leg and severing an artery. Russia’s greatest died a painful death three days later. D’AnthÃ¨s lived until the early part of the 20th century.

Louis XIV, the Sun King, tried to suppress dueling, but honor took precedence back then. The good thing about dueling was that it forced men to have impeccable manners. One slip and the rude one would find himself up early the next morning facing the man he”d insulted. In Malta, things went a bit far. Because of the island being the base of the Knights Templar, a man who had avoided a challenge would be imprisoned for life, the first five years being confined in a Maltese dungeon without any light. Not many avoided a challenge. Leigh writes that Ezra Pound challenged the poet Lascelles Abercrombie to a duel, the weapons being unsold copies of their work to be thrown against each other. That was obviously a joke, but Marcel Proust, months before his death in 1922, challenged a drunken youngster who had made fun of him for wearing a bowler hat and a shawl in a nightclub. The challenge was not accepted, and just as well.

The author writes that the last literary duel to take place was between the Southern gentleman poet Allen Tate and the critic Karl Shapiro in 1948. Shapiro chickened out, I believe, claiming dueling was illegal. I was always under the impression that the last duel was the one between the Marquis de Cuevas of ballet fame and the great choreographer and dancer Serge Lifar. It took place in the Bois de Boulogne in the late “50s. The two men, both gay, circled each other thrusting at times, until finally Lifar scratched the Marquis in the wrist and they both threw themselves in each other’s arms bursting into tears. The newspapers had a field day. No one was charged, as there was no damage.

Most of Leigh’s duels are between fictional characters. For example, Bolingbroke and Mowbray in Shakespeare’s Richard II. In Sheridan’s The Rivals, Jack Absolute duels Sir Lucius O”Trigger. And of course, in Les Liaisons Dangereuses, the aging rouÃ© Vicomte de Valmont perishes from the thrust of the young chevalier Danceny. When thinking clearly, I suppose a duel is a bit too much. Killing a man over a remark must be the greatest waste ever. Still, the fear of a duel concentrates the mind and stops people like the Englishman who is bad-mouthing me from showing off and whining like a child.