Pitchforks and Torches in Orlando 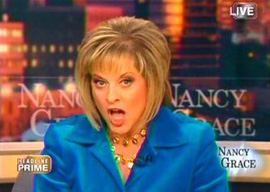 NEW YORK—I tried. I really tried. I wanted to be the only person in America who didn’t know anything about the Caylee Anthony murder case.

I intentionally avoided it whenever it would come on cable TV. I have such an aversion to that caterwauling condescending public scold of a schoolmarm named Nancy Grace that I took Headline News Network off my remote control so that it automatically skipped to the next channel anytime I was surfing. Sometime in the past year they apparently gave Nasal Nancy a 24-hour show dedicated to the reinstatement of flesh-flaying, foot-roasting, and iron-maiden impalement for all criminal defendants. Her acolytes spread Nancy Graceisms all over the Internet through articles predicated on the idea that innocent victims’ blood has morphed into vengeance-blogging directed by the Almighty. But as I said, I managed to step aside. Whenever someone would post a photo of Casey Anthony with some slogan like, “Look at this slut partying while her baby is dead,” I would move onto the next subject or delete the email without answering.

And then when they finally got through the investigation, the arrest, the years of pre-trial hearings, the actual trial, and the verdict, I thought I was finally safe.

How wrong I was.

Not only is Casey Anthony still on my TV screen, but Nancy Grace has migrated to every other network so she can keep talking about it even if you have your remote control set so that you never have to listen to Nancy Grace.

The thing is over, people. She’s not guilty. Not guilty means what it’s always meant. It doesn’t mean innocent; it means not proven guilty. Give it a rest.

I don’t get the “party slut” emails anymore. What I get now are the “Caylee’s Law” emails. Vote for Caylee’s Law. Go to your Congresspeople and tell them to pass Caylee’s Law. Caylee’s Law says that if your child is missing and you don’t report it, you’re guilty of a crime. If you’re planning to kill your child and hide the body and spend a lot of time covering up the crime, you won’t be able to do that anymore because at some point you’ll slap your forehead and go, “Damn! I can’t hide this body! I can’t destroy evidence! Caylee’s Law says I have to report the kid missing right now!”

It’s the most meaningless addition to the criminal statutes since “hate crime” laws. Those were invented under the assumption that if you simply murdered your wife or husband or business partner, you probably didn’t hate them, but if you yelled, “You stupid wop!” right before pulling the trigger, your obvious Italophobia should qualify you for 30 extra years. Every decade or so some collective insanity runs through America’s various legislatures and we suddenly have a raft of statutes dedicated to making sure that nobody wearing dark gloves and fleeing in a white Bronco on a Friday afternoon ever again goes free for lack of DNA evidence in a double murder case in Brentwood. And we call it the “Justice for Nicole Law.”

There have been lots of comparisons to the O. J. verdict, which makes no sense to me because that verdict was widely celebrated, not reviled. I was on the #6 subway train when the O. J. verdict was announced, and there was universal cheering and shouting and hooting about “O. J. is innocent! O. J. is innocent! They let O. J. go!” Unless I’m missing something, the Casey Anthony verdict has inspired the opposite response. There were people fainting on the streets outside the Orange County Courthouse. There were mobs massed outside the jail when she was released, holding up placards reading “No Justice For Caylee!” in their non-pitchfork other hand. When her SUV pulled away from the jail last weekend, they had one of those traffic copters chasing her down the freeway like it was a high-speed chase! For all I know the copter pilot is still on the case. I know that “Casey sightings” have been bandied about the Web. Reporters have filed stories about mysterious women seen boarding private planes in the middle of the night, begging the question, “If you were able to prove that Casey Anthony was in a particular place at a particular time, what exactly would the story be? That she’s still breathing?”

So what are we taught to do in Journalism 101?

Acknowledge and ignore. Acknowledge that the rabble is outside. Write about it if it threatens to contaminate the jury. Ensure that we the media don’t become part of the story.

I never went to journalism school anyway, so I wasn’t around when they apparently added Journalism 102, which can be summed up by reporters’ attitudes at the Anthony trial:

STIR UP THE RABBLE! TELL THEM HOW RIGHT THEY ARE! GET IN THE MIDDLE OF THE STORY AS AN ADVOCATE FOR JUSTICE BUT DON’T QUOTE ARISTOTLE!