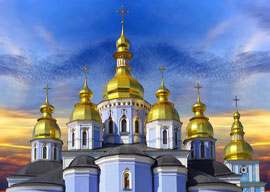 Pity the poor Ukrainians. Theirs is a vast country, fertile of soil and rich in minerals, wealthy in human capital and industrial resources, but forever caught at the crossroads between empires. Reading the Western media’s take on the recent political unrest, it is a Manichaean story of good versus evil: the freedom-loving Ukrainians versus the evil Soviet Russian puppets. The Russian media view it as the freedom-loving Ukrainians versus the evil fascist Western puppets. Neither is wrong.

Ukraine, despite having only one government, isn’t really one nation. There is an ideal Ukrainian nation of Cossacks and Taras Shevchenko, just as there is an idealized American nation of cowboys and George Washington, but Ukraine is at least two historical nations. The south and east are Russian-speaking and as far as I can tell have been part of Russia since the Cossack revolt from the Polish-Lithuanian Empire in the 1600s. Western Ukraine has never been part of Russia. Before the partition of Poland in the 1700s, it was part of the Polish-Lithuanian Empire. After that, it was part of the Austro-Hungarian Empire. West Ukraine’s city of Lviv used to be known as “Lemberg,” and it is as obviously an Austro-Hungarian city as Dallas is an American city.

During the Russian civil war, the west declared a nationalistic independent republic, governed by the Rada in Kiev and allied with the Central Powers. The east almost immediately declared Soviet allied socialist republics based in Karkov and Donetsk. The Polish-Ukrainian War put an end to the independence of western Ukraine in 1919, and the area west of Kiev remained Polish until Stalin and Hitler decided to carve up Poland in 1939. After the Nazi invasion of 1941, the heroic Ukrainian Insurgent Army in the west resisted the Nazis and the Soviets without any outside assistance right up to the mid-1950s.

The “Orange Revolution” of 2004 followed this pattern. The porridge-faced hero of this “revolution,” Yuschenko, is from a Ukrainian-speaking region and is an ethnic Ukrainian, albeit one with a wife that worked for the US State Department. The grim-faced Russian-favored villain Yanukovych is from Donetsk in the east, the same city that declared for the Soviets in 1918. Yanukovych is not ethnically Ukrainian, being of Polish, Belarusian, and Russian ethnicities. Just to keep the history interesting, Yanukovych was appointed prime minister by Yuschenko in 2006 and later won a fair and democratic election in 2010, which is why he is in charge now, despite the Orange Revolution.

The present low-level civil war in Kiev is a continuation of battles that have gone on for centuries. The people freaking out in Kiev are predominantly Ukrainian-speaking and from the west. They wave flags of the Ukrainian Insurgent Army. The leaders of the people in the streets are from the west of Ukraine. Head of the Tymoshenko party, Arseniy Yatsenyuk, is from Chernivtsi in the southwest. Head of the nationalist Svoboda party, Oleh Tyahnybok, is from Lviv, the largest city in western Ukraine. Gentleman boxer Vitali Klitschko is so Western-oriented, he lived in Germany until he got involved in Ukrainian politics and took up full-time residency in Kiev. The western cities of Lviv, Ternopil, and Ivano-Frankivsk have declared a general strike in favor of the protesters.