Planks, But No Planks: The Fatal Idiocy of “Planking” 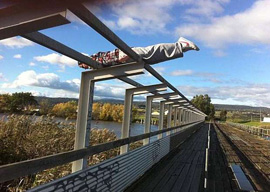 On the off chance that you lead a remotely fulfilling life and were busy working, studying, or having sex—even alone—on Wednesday, you may have missed the “First Annual Global Planking Day” and been none the worse for it.

You might even be one of the rare souls lucky enough never to have heard of “planking.” I sincerely regret being the messenger who delivers the bad news to you, because even learning about it will render you permanently less intelligent.

Planking is the practice of lying down flat as if to mimic a wooden plank.

A more complicated explication that still fails to make it sound any smarter:

A fast-spreading global fad, planking involves people being photographed while lying face-down in a public place and posting the images on the Internet.

Helpful instructions for the would-be planker:

Lie face down, straight as a board, pointed toes, arms to the side with straight pointed fingers. The planker’s face must remain expressionless, head held straight, not turned. Pretend as if rigor mortis has set in.

If on some lonely afternoon I were to find myself in such a position, I would wish for rigor mortis to set in. Another plankophile described the practice as “pretty much active lying down.” Yeah, pretty much. “It’s the most fun you can have while being still,” enthused an Australian plankster on Facebook. If that’s the case, I imagine being stillborn must feel like attending the Mardi Gras.

“Of late, the practice has gone viral as if it were some form of autistic measles.”

Still, on Wednesday, people across this vast blue orb who display flashes of intelligence in other areas—mainly computer programming and social media—celebrated First Annual Global Planking Day by doing stupid things such as lying flat on basketball hoops, balcony railings, and kitchen counters, having someone photograph it, and uploading the results online.

One could strain with all their might and still be unable to conceive of things more meaninglessly self-abasing than lying face-down to get some thumbs-up, but we live in desperately meaningless times. And it’s not as if there weren’t stupid teen crazes of yore. Train-surfing wasn’t the brightest of ideas, yet at least it carried a subtext of poverty, bravery, and danger. It also required a modicum of athletic skill. Pole-sitting was a goofy American fad in the Roaring Twenties before the Great Depression came along and replaced it with a goofier fad of stockbrokers jumping from skyscraper ledges. But even pole-sitting derived from a long historical tradition of column-sitting that went all the way back to fifth-century ascetic St. Simeon Stylites, who was reputed to have sat on a small platform atop a pillar in Turkey for 37 years. As superficially idiotic as that sounds—which is “very”—such feats involved tremendous physical endurance and, however feverishly misguided, some huge scoops of spiritual dedication. They definitely required more chutzpah and effort than lying still on a park bench for five seconds while your best friend captures it on his iPhone.