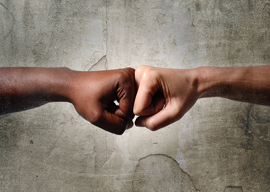 Last week, I pointed out that the social sciences were suffering from mirror-image problems: the much-publicized Replication Crisis, in which academics announce trivial findings that turn out to be not reproducible, and the less-discussed Repetition Crisis, in which the only explanations for serious phenomena that researchers are allowed to offer are the same old same old: white racism, male chauvinism, white male racist chauvinism, and so forth and so on.

Calling either problem a “crisis” is, of course, journalistic hyperbole intended to dramatize situations that are likely to bump along deleteriously, but not quite self-destructively, for years.

This week, however, Brian Nosek, a psychologist who as cofounder of the Center for Open Science has been a leader in exposing the Replication Crisis by encouraging 100 attempts to reproduce popular studies (only 36 came up with statistically significant results), has published a report in Social Cognition that grapples productively with both the Replication and Repetition Crises.

The paper by Nosek and two colleagues at the U. of Virginia (Jordan R. Axt and Charles R. Ebersole) is entitled: An Unintentional, Robust, and Replicable Pro-Black Bias in Social Judgment.

Nosek begins with yet another repetition of the scores of social science papers finding that whites discriminate against blacks (versus the tiny number reporting that whites favor blacks).

After all, everybody knows that blacks suffer under the pervasive burden of white racism. But, Nosek admits, “We began the present research sharing this presumption and were surprised to find contrary evidence.”

When Nosek et al. did an initial experiment with white respondents, asking them to judge whether students are worthy of inclusion in a (hypothetical) honor society based on GPA, test scores, and photos:

…we unexpectedly observed a social judgment bias favoring blacks over whites. In 5 subsequent studies, we established that this effect is robust, replicable, and appears to occur partly outside of awareness and control.

The latter part of Nosek’s findings””outside of awareness and control””is important within the academic world because in recent years a party line has developed that white racism works on autopilot outside the conscious willpower. Since few whites will admit these days to believing that blacks and whites tend to behave differently on average, the rationalization has emerged that white racism is such a powerful mind-warping force that it works its evil whiles outside of human control. The academic mainstream assumes that white racism operates much like the CIA mind-control beams that crazy people pick up via their dental fillings.

“This pro-black prejudice is hardly surprising in a culture that treats thinking well of blacks as the highest moral value.”

But Nosek’s original study and his five follow-up studies found the opposite. White people of all political persuasions tend to bestow honors upon blacks even when they are less deserving than whites. In a half-dozen studies, with a total sample size of 4,359 white people, whites consistently rewarded blacks for meeting lower standards.

Nosek’s various studies repeatedly asked whites if they were being biased, and the majority claimed they were trying to treat the races equally. But they still exhibited a systematic pro-black bias:

Participants, regardless of their explicit attitudes or political beliefs, appeared mostly unaware that they may have been comparing black applicants to a subjectively different standard than white applicants.

The fact that the pro-Black bias occurred even among those participants who simultaneously opposed affirmative action, wanted to be unbiased, and believed they were so is further evidence that the racial difference in criterion bias [i.e., antiwhite discrimination] can occur without intention or awareness.

Why do whites give blacks more honors than they deserve?

Prudence seems like one good explanation. In Tom Wolfe’s 1987 Great American Novel, The Bonfire of the Vanities, the Ed Koch-like mayor of New York City grudgingly admits to himself that much of his workweek is devoted to handing out “plaques for blacks,” as Hizzoner’s obnoxious but insightful aide calls them:

As soon as the words left his mouth, the Mayor regretted them. He knew what his tiny assistant would say. It was inevitable, and so he braced himself for the vile phrase, and sure enough, here it came.

In these troubled times, with the surveys going the way they were going, it was wise, and probably good, to single out as many black recipients of these trophies and rhetorical flourishes as possible, but it was not wise and it was not good for Sheldon Lennert, this homunculus with his absurdly tiny head…to call the process “plaques for blacks.”

This doesn”t mean, however, that whites are more likely to hire blacks for routine jobs than they are to hire, say, Mexicans. For example, while the Academy of Motion Pictures nominates lots of blacks, it hasn”t nominated an American-born Latino for an acting Oscar in over 20 years. And yet, Academy members hire far more Latinos than blacks to clean their houses and look after their children.

Nosek and company gave their subjects the celebrated implicit attitude tests, which have become popular for witch-sniffing racism. Subjects are shown pictures of whites and blacks along with positive and negative words, and the number of milliseconds necessary to respond is deemed evidence of racist guilt.

But in Nosek’s studies, the implicit attitude inquisitions failed to predict the pro-black bias of the whites:

Here, the pro-black behavior was in the opposite direction of participants” pro-white attitudes, and most participants (77.3%) did not report any conscious effort of altering their behavior to favor one race over another. From this perspective, the results are enigmatic. Based on existing theories of attitudes, it is difficult to explain how a pro-black behavior emerged that ran contrary to explicit and implicit attitudes, and, for most participants, did not appear to be a result of consciously altering behavior so as to favor blacks.

But should pro-black bias be all that “enigmatic” to social scientists?

This pro-black prejudice is hardly surprising in a culture that treats thinking well of blacks as the highest moral value.

America repeatedly gins up moral panics and two-minutes-hates over individuals who are revealed to privately hold thoughts skeptical of the racial orthodoxy. For example, in 2014 President Obama took time during a ceremonial press conference with a foreign leader to denounce Donald Sterling, owner of the Los Angeles Clippers, for what the jealous old fool had said to his part-black gold-digging mistress in private.

Sterling was subsequently forced to sell his property against his will.

But there’s evidence that the pro-black biases of Americans whites aren”t simply due to force majeure.