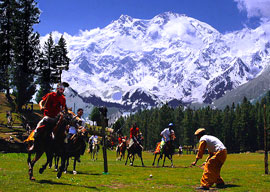 For somewhere a long way from anywhere, Nanga Parbat is a pretty lively place. The five-mile-high peak rises from a syntaxis, a center of compression where folding rocks collide and steam spits from its sides as Earth’s ninth-highest mountain rises heavenward as fast as the continents can slide.

Last Sunday, that slow tectonic violence gave way to another kind. A dour platoon of Sunni militants known as Junood ul-Hifa stormed across one of the world’s most idyllic landscapes to slaughter a sleeping party of Ukrainian and Chinese mountaineers.

“The object is to get to the top of the world, not the bottom of the Punjab.”

Blame it on the drones. The attack occurred on the mountain’s west side facing Diamar, a valley on the far side of the Indus that’s a week’s walk and a cultural world away from the Fairy Meadows that roll along a two-mile-high shelf on Nanga Parbat’s northeast slope. Those Elysian Fields look down on the Raikot glacier on one side and up to the Olympian heights of the peak that fills the southern horizon. To get to them you have to climb out of the Indus Valley. After a hair-raising morning on the Tattu road it takes the rest of the day on foot or horseback to climb up through the pines to emerge into an idyll straight from a Persian miniature. Polo is played where the game was born, in front of a mountain twice the size of the Matterhorn, mirrored in a glacial lake.

Two decades ago, the sons of the Mir of Raikot, some of whom have summited the mountain, began turning a cool summer pasture first into a polo field, then a campground, and eventually a lodge for those who come to climb or merely marvel at a magic mountain whose meadow fairies outrank Titania and Oberon, and as pagan demigods are as much persona non grata in the bloody minds of the Taliban as infidel tourists. 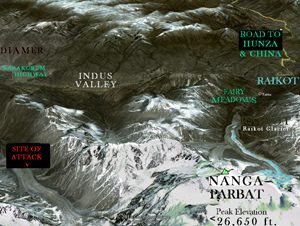 This magic mountain’s problem is that, though a long way from anywhere, it’s rather close to Afghanistan. A century ago the Taliban’s Deobandi predecessors turned a gimlet eye on the “Kalash” valleys to the west, which clung to vestiges of the old-time religion from which both the Greek pantheon and the Hindu gods descend”when Kipling was a cub reporter in Lahore, Nanga Parbat overlooked “Kafiristan.”

Since then the religious pluralism of the Raj has disintegrated, and the fundamentalists” definition of “kafir” has broadened well beyond ultramontane idol worship. Down in the Indus Valley at the mountain’s foot, the ladies in our party had stones thrown at them for appearing bare-armed to cool their heels in the river.

While the identity of the killers is still being sorted, among those assaulted was a local mountain guide, one of the famously hospitable Dards, an ancient and indigenous people whose language antedates Sanskrit, and whose deeds figure in the Mahabharata“a hundred generations ago, these were the go-to guys for the sacred weapons of the Vedic wars.

In the three millennia since, the Dards” religion has gone with the flow. They were Hindu when Herodotus asked after them as the Dadicae, Zeus-fearing Gandharans in the expeditionary wake of Alexander the Great, Buddhist when the White Huns came tearing through the neighborhood, and Islamic after the Muslim conquest of the 14th century.

Some, like the Dards of Darchik, Garkon, and Da, have faded by gradual intermarriage or been erased from history by abrupt ethnic cleansing”the Talibs reserve their fiercest antipathy for Muslims with whom they religiously disagree. This means trouble for the northernmost mountain people in the arc from Kashmir to the Pamirs whose ancestors became Shia, or Ismaili”Hunza is where the Aga Khan’s great-grandfather took refuge from Wahabi and Deobandi wrath two centuries ago.