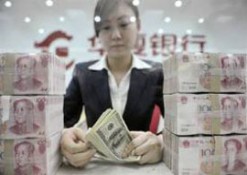 Recently, China overtook Germany as the world’s largest exporter. And just the other day, China was calculated to have overtaken Japan as the second largest economy in the world. China is on a roll, or even on a tear, if you prefer. It is unlikely that Dick Nixon and Hank Kissinger foresaw something like this in their wildest dreams back in 1972, when they undertook to play the China Card as a way to poke the Kremlin in the eye. Probably they simply deduced that it was counterproductive to keep such a large, nuclear-armed country in isolation, and that it was better to make contact with Chairman Mao before he exited for the great Red Stockade in the sky.

In any event, here we are. Some foreign policy experts feel that the rise of China as an economic superpower means that it will emerge as a military threat to the U.S. This may seem understandable with the U.S. fast-fading as the world’s lone surviving superpower. Professor John Mearsheimer, of Israel Lobby fame, has cautiously expressed this idea in a recent guest lecture in Australia, at the University of Sidney. He talks in Mahanian terms about China. He posits, for example, that China will feel the need to “protect their sea-lanes and not have to depend on the American navy to handle that mission.” Mearsheimer got me to thinking. Is China going to eventually build a two or three ocean navy, in emulation of the U.S.? Is it going to invade Taiwan to “reunite” it with the mainland? Does China have designs upon Japan?

My feeling is, the rise of China may not pose a genuine problem, despite Professor Mearsheimer’s analysis. What is happening is only natural, brought about by an abnormal set of circumstances which Washington imposed upon the Asian Pacific littoral. I am referring to the obliteration of the Empire of Japan and its replacement by a Japan, which was designed ever-afterward to be a geopolitical midget in the Far East like a truncated Germany was designed to be the same thing in the West.

“Let’s make a concerted effort to stay on good terms with both China and Japan. Let’s avoid confrontation with these two economic colossi in the Far East. At this stage, America really has no other choice.”

Times have changed. Washington and Beijing are in a full, de facto economic alliance, which should continue far into the future. If they are economically joined at the hip, what is the incentive for conflict? They are mutually dependent, but America is clearly in decline. The strength of a nation flows from within and expands outward. The success of its foreign policy will be in close symmetry to that inner strength or lack thereof. A nation as heavily in debt as the United States—while concurrently beset by countless internal economic nightmares, which have long been neglected—cannot continue as a serious, respected power in the world.

There is no rational reason at this point in time for the U.S. to be deploying a fleet of aircraft carriers and other assets on the high seas and on land from Korea to Japan to Australia to India, and back across the Pacific. It is meaningless to do that now, just like it would be meaningless for England to do it, the British Empire having self-destructed decades ago. The geniuses in Whitehall realized too late that they had bankrupted the Empire in two pointless, vainglorious and avoidable world wars, and that they could no longer maintain a presence East of Suez. Washington is still at it, thanks to the force of habit and egocentricity. Of course, there remains Japan, a near-defenseless ally of the U.S. thanks to World War II. But there is no sign China has designs on Japan that I am aware of. In any event, it is inevitable for circumstances to reset to “normal” for lack of a better term.

Post Vietnam, post Mao Tse-tung, and post Cold War, what remains to be done in the Far East and the Pacific is to bring about an amicable dissolution of the U.S.-Japanese defense treaty, which is nothing but a fig leaf for the American sphere of influence in Asia, corresponding to NATO in Europe. The policy of treating Japan like a client-state has been inappropriate, insulting to Japan, counter-productive and is now wildly superannuated. This situation is not in America’s or Japan’s best interest—anymore than President Franklin Roosevelt’s deliberate policy of forcing Japan to embark upon war with America was a good idea for the Far East or the world.

A potential problem may arise after America has faded from the scene, like England before it. Perhaps a rivalry will reignite between Japan and China, leading to conflicts in the Far East, similar to that of the 1920’s and 30’s. On the other hand, it is more likely that leaders in Japan and China have learned from the past, and will not repeat the same mistakes. Moreover, thanks to the implosion of the Soviet Union brought about by Ronald Reagan, and the opening up of China under Nixon, the threat of nuclear Armageddon has 98% been eliminated from both Russia and China. They have been knocked out as threats to world peace and prosperity by globalism and common sense.

Meanwhile, Uncle Sam is being taken for a ride, big time, by the usual suspects back in Washington. Zionism and the Israel-first fanatics, like the Comintern and the Soviets before them, are the real problem confronting America and the world today. The deluded and intellectually dishonest surrogates for Likud—whether it be “the Neocons” or the so-called “liberal Democrats”—are every bit as dangerous as the agents of international Communism were in days gone by. While redirecting our priorities and waking up to reality, let’s make a concerted effort to stay on good terms with both China and Japan. Let’s avoid confrontation with these two economic colossi in the Far East. At this stage, America really has no other choice.