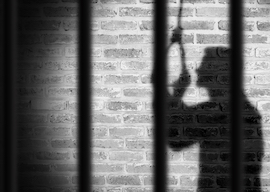 NEW YORK—There’s a moment in the cult film Silent Night, Deadly Night Part 2—we all remember that one, right?—when deranged serial killer Ricky Caldwell wanders through a residential suburb blowing away random people until he’s surrounded by three barricaded cops with firearms pointed at him, ordering him to drop his weapon. Instead he points his gun at his own head—at which point the cops all turn into mental health counselors, shouting, “Don’t do it!” and “It’s not worth it!”

Maybe it’s worth it.

Maybe he’s looking at the electric chair and deciding he’d rather get it over with now.

And maybe that’s a good decision—for him, for the criminal justice system, and for the state budget, because those capital murder cases go on forever.

For some reason, people hate it when the accused criminal kills himself, especially when he does it before the trial. Am I the only person who can see the logic of Jeffrey Epstein’s suicide? You don’t have to be a conspiracy theorist to imagine why a guy facing life in prison for charges he’d already served time for—so he knew what life is like for sex offenders in the joint—would be bummed by the unsealing of 2,000 documents containing every type of sex crime known to man, including rape, trafficking, and molestation of minors, not to mention the lesser offenses like pandering and befriending horny presidents.

“He took the coward’s way out.”

Every time I hear this I wonder how killing yourself became the equivalent of running out the back door of a jewelry store. I don’t think Ernest Hemingway was a coward, or Sylvia Plath, or Robin Williams, or Marilyn Monroe, or Kurt Cobain, or Virginia Woolf, or my colleague Hunter S. Thompson. I think suicides sometimes occur because someone already dealing with a horrendous situation—depression, poverty, shame, a criminal past—is hit with a new ton of bricks and is overwhelmed by the burden of staying alive. They’ve seen everything they’ve wanted to see. It hasn’t worked out. They’re done.

“Am I the only person who can see the logic of Jeffrey Epstein’s suicide?”

The remarkable thing about Epstein’s death is all the attempts to keep him alive. When the federal prosecutors went to court to file a routine motion to dismiss the charges—because the defendant was dead—the judge could have simply granted the motion through the clerk. Instead they had a hearing, and at that hearing federal judge Richard Berman invited twenty of Epstein’s accusers to give victim impact statements. People actually sat in the witness box and hurled epithets at a dead man. It’s some indication of the grandeur of the federal bench that judges now take on the roles of priest and psychologist, conduct séances, and aspire to be St. Peter guarding the gates of heaven and Charon ferrying people to hell.

Killing yourself in prison has always been supremely irritating to the authorities. Perhaps the most famous example is Hermann Göring, the Luftwaffe commander who managed to get a cyanide pill smuggled into his cell before they could hang him at Nuremberg. There have been six successful suicides at Guantanamo…that we know of. The military stopped publishing the number of attempted suicides out of embarrassment, but there were 120 in the year 2003 alone, and three on the same day in 2006. (These suicides are especially easy to understand. It’s not “I don’t want to face trial,” it’s “There’s never going to be a trial.”) Several other Nazis killed themselves in prison after receiving life sentences, including Ilse Koch and Rudolf Hess. Philip Markoff, accused of being the Craigslist killer, offed himself in Boston’s Nashua Street Jail before he could be tried. Richard Chase, the vampire cannibal serial killer from Sacramento, killed himself on death row simply by saving up his antidepressants until he had enough for an overdose. Aaron Hernandez, the NFL player serving life for murder, still had appeals pending when he hanged himself with a bedsheet.

I don’t think any of these people were crazy, I don’t think any of them were cowards, and I don’t think jail guards should be fired or disciplined when they don’t get there in time. The fact that the Director of the Bureau of Prisons was fired over the suicide of a high-profile prisoner indicates that these days the only game in town is vengeance. Denied the pleasure of seeing Epstein packed off to solitary in the supermax, the tabloids felt robbed and so did the people. The implication was that somehow he got away with it.

He didn’t get away with it. He died alone in one of the most depressing jails in the world.

The postmortem philosophizing about, “Well, the families didn’t get closure,” ignores the fact that every family interviewed after an execution says, “There is no closure.” It’s a false concept. It doesn’t exist. If we want to maintain the fiction of it, we can simply regard most prison suicides as early closure.

Unfortunately, in the movies they still make us suffer. Ricky Caldwell, the star of Silent Night, Deadly Night Part 2, pulls the trigger but he’s out of bullets, resulting in three more sequels. The last one starred Mickey Rooney. A cop should have loaned him some ammo.