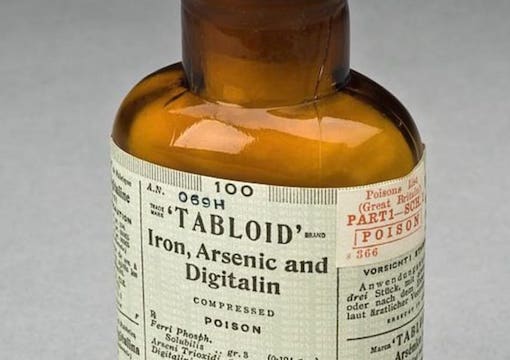 A few years ago, I had the bright idea of writing a book about arsenic in the 19th century. In preparation for writing it, I bought scores of books on this fascinating subject, including a very rare bound collection of arsenical wallpapers used in America. I had until then idly supposed that all such wallpapers were green, but no: There were arsenical wallpapers of many colors.

The 19th century was truly the age of arsenic. It was used in the disposal of inconvenient lovers, husbands, and wives who were not the only ones to suffer arsenic poisoning. There were famous cases of peppermints adulterated with white arsenic, and of beer contaminated with it. Bank tellers in the United States suffered arsenic poisoning from licking their fingers after counting greenbacks, the green ink containing arsenic. There was arsenic in flypapers, weed killers, and rodenticides.

Arsenic was the first drug of abuse to be regulated in Britain. After a spate of famous murders by arsenic, an act was passed (without much effect) to limit access to arsenic. Arsenical compounds were used as a stimulant, and the miners in Styria, in Austria, were said to take arsenic much as the Andean Indians chew coca, to give them energy and reduce their hunger. It was claimed that the Styrian miners habituated themselves to ever larger doses, but I have been unable to discover whether this was pure mythology. It sounds like it to me.

“Anyone who examined my library might conclude that I had spent much of my life plotting a murder rather than a book.”

Arsenic was mined in Cornwall by the English Arsenic Company. The land around its workings is still sterile a century and a half later.

Arsenic was used medicinally, and Charles Darwin’s famous chronic illness has been ascribed to arsenic poisoning from his repeated use of Fowler’s solution, a patent medicine that contained arsenic. Others have claimed that he suffered from arsenic poisoning from the stuffed birds he received from naturalists around the world: Arsenic was a taxidermist’s staple preservative, and one of the proofs of arsenic poisoning was the comparatively slow decomposition of corpses after burial.

The means of detection of arsenic the Marsh test was the foundation of all forensic science: It was the first true chemical test. One of the signers of the American Declaration of Independence was poisoned to death with arsenic by his wicked nephew, and conspiracy theorists believe that Napoleon was deliberately poisoned with arsenic by his British jailers on St. Helena, though others believe that arsenic impregnated the wallpaper of Longwood House and it was an accident. Others believe that he did not die of arsenic poisoning at all.

An arsenical compound was the first new treatment of syphilis since mercury, and arsenic was not only a cosmetic used to whiten the skin (as it was fashionable to do at the time), but a treatment for psoriasis employed by some dermatologists until the 1970s.

Arsenic was important in literature, in Madame Bovary, for example. Not only was it a favorite tool of murderers and murderesses, but—not surprisingly in the circumstances—of crime writers. Scores of detective novels have been written in which the victim was poisoned by arsenic.

Anyone who examined my library might conclude that I was a poisoner manqué, that I had spent much of my life plotting a murder rather than a book.

Having accumulated an immense arsenical library (I even had a Victorian book with a green cover tested for arsenic in the toxicological laboratory attached to the hospital in which I was working), I was mortified when another author in effect plagiarized me in advance by publishing a book—and a good one, too—on arsenic in the 19th century, before I had even begun mine. I am not bitter, however, and I do not regret my arsenical phase. I might even return to an aspect of the subject one day.

In fact, I retain an interest in criminal poisonings; there is no finer relaxation for me than reading about them. The other day, for example, I picked up a little book titled Poisoners of Women, by Harold Eaton, and read it at a sitting.

The book bears no date, but from internal evidence I should put it in the late 1920s. It is badly printed on rough and yellowing paper, and is obviously directed at a mass market. Its cover has a picture as vulgar as the times permitted, that of a man in evening dress and with irresistibly brilliantined hair dropping poison into a glass of wine while he slips off the white fur coat of a dizzy young woman whom he has evidently seduced before. My guess is that the book was sold in kiosks in suburban stations, to be read by exhausted commuters.

As to the title, it was obviously intended to attract readers rather than to describe accurately the contents of the book, for it consists of six case studies, the first of which is the poisoning of a young man rather than of a woman.

What is surprising about the book is the high quality of its writing. The author treats the subject of poisoning with the irony with which, for some reason, it has always been treated by the British: As late as 1953, Dylan Thomas has one of his characters in the play Under Milk Wood spend his time reading a book, Lives of the Great Poisoners, as he daydreams of eliminating his henpecking wife. Eaton, though he is writing for a mass market, assumes that his readership is a literate one. He begins his short introduction on the psychology of poisoners as follows:

It has been frequently argued that murder is not a normal act, that the ordinary mind is incapable of compassing it and the ordinary hand of executing it. Those who are responsible for this doctrine also urge that capital punishment should be abolished and that the murderer should be treated as a mental patient—a being to be pitied as the victim of an uncontrollable impulse rather than to be condemned as the author of an offence against God and man.

The argument, important and unresolved, is with us still, indeed I have heard it argued in court that the accused must have been mad to do what he did, and that he must have done what he did because he was mad. But that is not the point I wish to make: I want only to draw attention to the sophistication of the writing with its thread of irony running through it.

In fact, irony runs through the whole book. William Palmer, subsequently known as the Prince of Poisoners, invited his mother-in-law to come to stay:

After much persuasion she agreed, declaring to one of her friends that “she would not live a fortnight”—a prophecy which erred upon the side of optimism. She died ten days after her arrival.

I suspect that nowadays people might be shocked by this irony and believe that it indicated a callousness on the part of the author, as if he really thought that poisoning was fun or funny. We are now terribly literal-minded, too much so for irony. If we are infinitely more technically sophisticated than our near ancestors, mentally we are much less so.