Poles Are for Penguins and Polar Bears 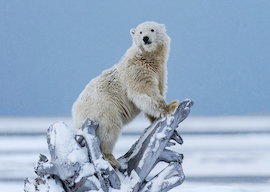 There’s no such thing.

Nobody lives at the poles except polar bears and penguins, and even they tend to live quite a few miles away from the actual pole.

When people say polarization, what they’re really saying is (a) the other side is making it impossible to compromise, so (b) I refuse to compromise.

“They’re living at the South Pole, how can I possibly talk to them?”

Once you say this, you’ve identified yourself as living at the North Pole.

We now have politicians in both major parties who have declared war on “moderates.” Not the moderates on the other side, the moderates in their own party.

This is the best evidence yet that the vaunted Two-Party System, long beloved of old-school politicians, is dead.

Every time I’ve suggested, over the years, that we’re too diverse to limit ourselves to two parties, that we should move closer to a parliamentary system, that the more parties we have the more people are forced to compromise, I always get flak back about “Yeah, that really works for Italy. Is that what you want? Elections every three months because nobody can form a majority?”

And yeah, that’s what I want.

“Make way for people who remember the world of compromise.”

I don’t want anyone holding voting control who has, say, 20 percent of the nation’s confidence. And that’s what we have now. We have flamethrower parties. It’s like having a party run by Marine Le Pen on the one hand, and a party run by Pierre Laurent on the other, and none of the French parties in between. At least when Le Pen or Laurent win a few seats in the National Assembly, they’re required to join forces with a couple of moderate parties in order to have any influence.

The solution for us is, first, to break the stranglehold the Democrats and Republicans have over election funding. The way the rules are written, you can’t get any matching funds unless you get 5 percent of the vote. Why 5 percent? Because it’s a virtually unattainable number when campaign contributions are limited to a few thousand dollars per person. The two ruling parties love it because it ensures they last forever.

The second thing we need to do is get rid of that limitation on individual contributions. Minnesota senator Eugene McCarthy, to use one example, was able to run a credible third-party presidential campaign in 1968 because he had just a handful of wealthy backers. He wouldn’t be able to do that today.

Of course, it always makes us feel good when someone we agree with says, “I will not budge.”

It’s what children do.

It’s what self-destructive businessmen do.

It’s what self-righteous demagogues do.

“Joe Bob, you live in a vanished world.”

“Joe Bob, there’s no reaching across the aisle anymore because the aisle is 12 million miles wide.”