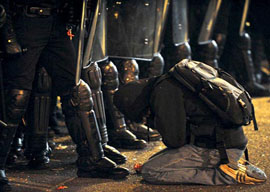 Congress shall make no law…abridging…the right of the people peaceably to assemble, and to petition the Government for a redress of grievances.
“First Amendment, US Constitution

Everyone has the right to freedom of peaceful assembly and association.
“Article 20, Universal Declaration of Human Rights

MANOSQUE, ALPES-DE-HAUTE-PROVENCE, FRANCE”The service stations here had no gasoline for a few days in late October, which was hard on this part of the country with little public transportation. There seemed to be enough diesel, though, for the trucks and farm machinery on which the rural population relies. Most people down here, despite being inconvenienced by strikes against raising the state pension’s full entitlement age from 65 to 67, supported the strikers rather than President Nicolas Sarkozy. The strikes and demonstrations were so pervasive that you”d think every French worker was a card-carrying union member. But you”d be mistaken. At nine percent of the workforce, France has Europe’s lowest rate of union membership. Even in the union-hating US of A, over 12 percent of workers are unionized.

At least down here in Provence, part of the explanation for the strikes” popularity is that this is Maquis country. The Resistance fought hard here during WWII to make the Allied Invasion of France a success. Almost every political confrontation since the war has been about what you or your parents did then, much as Ireland is divided over what the Free Staters and the IRA did in the early 1920s. It makes people on both sides prefer confrontation to negotiation, strikes to discussion, and protests to lobbying. Most French rÃ©sistants were socialists and communists”not exclusively, but a majority nonetheless. Proud traditions of opposition and resistance die hard, even when their cause may be wrong.

“It is not law enforcement’s job to take sides in political disputes or to stop protests.”

Most seem to agree that Sarkozy is a fool, just as many Italians tend to regard Silvio Berlusconi as a crook and a buffoon. That is probably why Sarko is a shoo-in for reelection in 2012. His popularity, which was high when he was bashing Gypsies and burqa-wearing women, is lower than any time during his (or almost anyone else’s) presidency at 29 percent. Support for the strikes held steady at nearly 70 percent, even when schools closed, transportation collapsed, and small-scale violence erupted. Despite the protests, Parliament passed the law on October 22 to raise state pensions” minimum ages and vesting requirements, and Sarkozy has said he will sign it into law by November 15. Despite public protests against his policies, Sarko won. It is hard not to admire him for that, especially when little else about his reign could be described as admirable.

The unions should have won, as they did in 1995 when then-President Jacques Chirac attempted a similar restructuring of the state pension. This time around the timing was good”during the rentrÃ©e, when students have returned to school and workers” summer vacations have ended. It meant that everyone was available to strike. The pensions issue was presented as part of the admittedly very real attack on ordinary people’s living standards that force them to pay for bankers” illegal activities. While the French GDP rose 50 percent from 2000 to 2009, the GDP share devoted to wages has been declining since 1985. As is the general global trend, wealth is becoming concentrated in fewer hands.