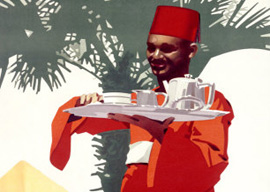 First it was Tunisia’s Zein El Abidine Ben Ali. Then it was Egypt’s Hosni Mubarak. Ousted by their own people? Yes, but here in France, they will be remembered as the all-expenses-paid hosts of Nicolas Sarkozy’s two leading ministers. Step forward, Prime Minister FranÃ§ois Fillon and Foreign Minister MichÃ¨le Alliot-Marie. Their timing was impeccable. The foreign minister and her consort, Deputy Minister of Parliamentary Relations Patrick Ollier, were flown around Tunisia with their children courtesy of a millionaire friend of Ben Ali’s about the time a young man’s self-immolation set the former French colony alight. On her return to Paris at the end of her complimentary winter vacation, Alliot-Marie proposed that France help Tunisian police quell the unrest and keep Ben Ali in office. Oops. The French could teach the Tunisians how to wield a nightstick; Ben Ali skipped town.

The French press picked up the story, and Prime Minister FranÃ§ois Fillon gallantly leapt to her defense when the free holiday became public knowledge, only to be outed himself as a recipient of Hosni Mubarak’s largesse.

Conrad Hilton used to say the important thing in the hotel business was location, location, location. In politics, it’s timing. Fillon’s timing could not have been worse. In one of the more laughable political confessions this side of Chicago, the prime minister’s office released a statement that Fillon was coming clean about his own free Egyptian Christmas sojourn “in the interest of transparency.” His sudden decision to become transparent followed France’s satirical Canard EnchaÃ®nÃ© running a front story about his vacation every night. Yet Fillon thinks he can get away with it, and he probably will. All he did was allow Mubarak’s regime to pick up the tab for his family’s hotel rooms, Nile cruise, and airfares.

Alliot-Marie, unlike Fillon, did not confess. She fought back like Lady Macbeth. She told France-24 Television, “I”ve done nothing politically reprehensible.”  But her contention that she was “no longer the foreign affairs minister” while vacationing courtesy of a torturer’s crony had to be retracted as quickly as Sarah Palin’s misstatement about America’s long alliance with North Korea. Someone must have pointed out to her the obvious, which she reiterated the next day: “It’s true that one is a minister twenty-four hours a day and 365 days a year.” Well, one is until one has to resign.

The Chamber of Deputies had the temerity to question her about the affair. “This polemic is enough,” she declared. “I”ve responded with candor and honesty to everything. I will not respond anymore to anything.” In other words, “Let them eat pita.”

Sarkozy reacted to the scandals by informing his cabinet that “members of the government must prefer France for their holidays.” Presumably they will be free to accept flights and villas on the CÃ´te d”Azur from local arms merchants, but the lid on invitations from abroad is partially shut. Exceptions to the no-foreign-freebie rule, according to Sarkozy, “will be authorized by the prime minister….” But didn”t the prime minister cruise down the Nile at Mubarak’s expense?