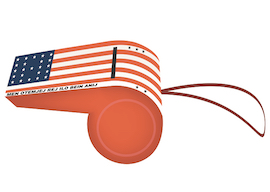 Flag of the Bikini Atoll

Last week, The Washington Post and the AP uncovered a racist scandal of international proportions involving that most sinister of beverages, the preferred drink of Archie Bunkers and Al Bundys worldwide: beer.

See, there’s a microbrewery in Texas (I feel the racism already) that has “literally” (as in, literally, as in, no, not at all literally) inflicted suffering on an entire region of gentle, oppressed nonwhites. The Manhattan Project Beer Co. is run by a husband-and-wife team of amateur brewmeisters. Operating out of leased space at another brewery, Manhattan Project Beer is hardly a household name. Its beers sport atomic-themed monikers like Plutonium-239, Half-Life, Particles Collide, Hoppenheimer, and (my favorite) Necessary Evil.

All fun and games, right? You racist! Recently, Manhattan Project Beer found itself in hot brewing water after unveiling its latest creation: Bikini Atoll. That’s the name of the now-depopulated Micronesian island chain where evil American white supremacists tested atomic bombs (why? To be racist, of course). And now, the outraged inhabitants of the Marshall Islands are up in arms over this Dallas-brewed hipster gose. How dare the brewery use the name of an area that was the site of so much irradiated breadfruit! As one beer-enthusiast website put it (I’m not making this up), naming a drink after Bikini Atoll is like celebrating the Holocaust.

The unnamed AP reporter whose piece was carried by the WaPo actually raised an intelligent point in the article: If the natives are so worked up over the name of this craft beer, how do they feel about, you know, the bikini, the piece of clothing that practically defined the latter half of the 20th century? Wasn’t that specifically named for the atomic tests?

A journalist asking nonwhites a probing question…what is this, the AP or Takimag?

In response, the reporter was told that the islanders have no idea what a “bikini” is, because the garment goes against their delicate moral standards. And…the reporter left it at that. So no, this was not Takimag. But I bet you have a follow-up question. I certainly did: If the islanders haven’t heard of one of the most internationally well-known pieces of clothing ever created, a garment that has even spawned “modest” Islamic iterations, how in the living hell did they know about an artisanal beer in Dallas, especially if they’re so damn straitlaced and moral?

It’s fun to make good sport of the media, but the truth is, most of these hacks aren’t stupid. When they leave something out, something obvious like not following up on “our humble prudish isle has never heard of a bikini, but we’re totally up on the Dallas brewery scene,” it’s always for a reason. In this case, the reason was that neither the AP nor the WaPo wanted readers to know how the viral beer story got started. It was just one guy, a social media troll named Angelo O’Connor Villagomez, who calls himself “the godfather of the Mariana Trench” and “Saipan’s most popular blogger.” Villagomez has 1,300 Twitter followers (don’t laugh; that’s all of Saipan), and on Aug. 13 he tweeted about the beer controversy (that he created), declaring that “for Oceania people this is on par with using school shootings or 9/11 as a marketing scheme.”

“Like any good magic trick, these things only work because the magician is withholding a key piece of information.”

And then a reporter searching for his “racism story o’ the day” came across Villagomez’s tweet and bam, a viral sensation was born (this is the exact same sequence of events that occurred in the case of the trumped-up Burger King “racism” scandal I covered in April).

Like any good magic trick, these things only work because the magician is withholding a key piece of information. In this case, what needed to be hidden was that the “islanders” were not up in arms over a craft beer. One dude was, and the rest was journalistic legerdemain.

Speaking of magic, one thing you can always rely on is that any time a magician tells the audience, “I’m gonna tell you the truth,” he’s lying; it’s just part of the setup. That rule goes for mainstream-media magicians as well. Take the oh-so-respectable PolitiFact, that unbiased, nonpartisan debunker of all things false and misleading. PolitiFact claims to “expose” lies, but that’s just the patter. In truth, PolitiFact deals in lies. Like last week, when the site’s venerable ephors decided that even though Elizabeth Warren and Kamala Harris were “wrong” to say that Ferguson police officer Darren Wilson “murdered” gentle giant™ Michael Brown back in 2014 (Wilson was completely cleared by Obama’s Justice Department), we should be cool with prominent politicians using a 100% inaccurate (some might say defamatory) word, because “focusing too much on the linguistics in controversial cases” is a “distraction” that can “obscure the discussion of larger issues” (like racism!).

Other conservative writers have ably covered the PolitiFact Ferguson debacle, but I have my own personal twist. And it fits right in with the theme of this week’s column, because, as magic’s greatest faux-debunker Penn Jillette once said, “with magicians, even things they don’t care about, they actually do care about.” In other words, when a magician tells you that something’s not important, that means it is important, because that’s where the “dirty work” is happening.

To pull off the Ferguson trick, PolitiFact needs you to think that words don’t matter, because “larger issues” overshadow mere “linguistics.” And it’s a good gag, until you compare it with PolitiFact’s “global warming” routine, which relies on exactly the opposite patter, that “larger issues” require an obsessive, eagle-eyed focus on linguistics.

Back in May 2014, PolitiFact gave Marco Rubio a “mostly false” rating based solely on one word. Rubio had claimed that global warming had “stabilized,” and Louis Jacobson, the same PolitiFact sumbitch who wrote the “don’t focus on linguistics” piece about Ferguson, attacked Rubio for using the word “stabilized” when, according to Jacobson, the actual word should have been “paused.” Jacobson’s point? One must focus on linguistics when it comes to “larger issues” like global warming!

Supporting Jacobson, PolitiFact editor Angie Drobnic Holan concurred in a separate piece that “stabilized” was indeed the wrong word, and “plateaued” would have been correct.

I wrote to Ms. Holan:

It took some time, but Holan finally replied:

I disagree that they are synonyms. Stabilized implies a permanent stop, while plateaued implies change will resume.

Angie Holan don’t need no stinkin’ dictionary! But sadly for her, I can be a bit obsessive when it comes to forcing media hacks into a corner. I responded:

As Oxford Dictionary forum mod Steve Doerr confirmed to me, “stabilized” and “plateaued” are indeed synonymous, with the exception being that something can only plateau after rising, while something can stabilize after rising or falling. I passed this along to Holan and her coworkers, and I sent them pieces from The New York Times, LiveScience, The Journal of Biological Chemistry, and the Japan Agency for Marine-Earth Science and Technology that use the term “stabilized” to describe the global-warming “pause” (in some cases using it interchangeably with “plateaued”).

At this point, Holan demanded that I stop emailing her colleagues.

That was funny enough, but it quickly got funnier. While attacking Ted Cruz’s global-warming views several months later, PolitiFact staff writer Lauren Carroll wrote that Cruz shouldn’t have made the claim that warming had “stopped”…he should have said it was “stable.”

Yes, PolitiFact’s Lauren Carroll declared that “stable” is the proper term for the current state of global warming, even after Louis Jacobson and Angie Holan gave Rubio a “mostly false” rating for using the term “stabilized.”

Holan refused to address the use of “stable” by Ms. Carroll, so I emailed Carroll directly:

To “stabilize” is defined by Webster’s as “to make stable.” How can “stabilized” be false, but “stable” accurate?

After a fun but pointless back-and-forth over the nature of Webster’s definitions, Carroll finally, and somewhat exasperatedly, conceded, “I didn’t write the Rubio piece, and every story goes through multiple editors to come to a ruling. So it’s not my place to say.” She encouraged me to read her Cruz critique “independent of the word ‘stable.’”

Read it while ignoring the key word in the piece. That was her response; read it “independent” of the disputed word.

With Ferguson, PolitiFact demands that one must not focus on specific word choices, even words that are objectively inaccurate, because doing so obscures larger issues like racism and makes Democrats look bad. But with global warming, if attacking a word choice can make a Republican look bad, words matter more than anything. Until a drunken Jew with way too much time on his hands presses the issue, in which case words suddenly don’t matter after all, and one should read PolitiFact pieces “independent” of specific word choices.

Words don’t matter, words do matter, words don’t matter. For the ideological magician, all that actually matters is the illusion. A run-of-the-mill Vegas magician will want the audience to come away thinking a coin has vanished or a mind was read or a lady was cut in half. An ideological magician will want the audience to come away with the idea that, say, an entire island is up in arms over a beer, or a virtuous Democrat used an inaccurate word but don’t focus on that, focus on the “larger issues,” or a villainous Republican “denied science” by using a wrong word and we must focus on that rather than on the fact that the “debunkers” used the same word in the same context.

It’s all just manipulation and misdirection. “Don’t ask how remote Pacific Islanders came to know of a Dallas microbrew!” “Don’t worry that distortions in the Ferguson case have caused riots!” “Keep your eyes on the GOP’s climate word choices, not ours!”

I’ll close with one final Penn Jillette quote: “The most immoral thing a magician can do is magic without consent” (magic with intent to deceive rather than entertain).

“Magic without consent.” It’s what manipulative news organs like the AP and The Washington Post do, and it’s certainly the stock in trade of the phony “debunkers” at PolitiFact. And indeed, it’s immoral, and unquestionably harmful to the public discourse.

I’d never divulge a legitimate magician’s tricks, but I’ll take any opportunity to expose the inner workings of the professional fibbers for whom “magic without consent” is not a proscription but a motto.