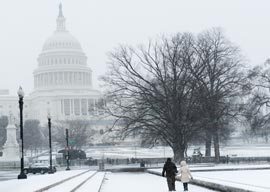 2015 may be the last year when Americans think of Washington, D.C., as a safe city.

Last June, a video of a brutal beating between two black men on the city’s Metro line went viral. One month later, on July 4, a young black man named Jasper Spires stabbed an American University graduate nearly 40 times on a Red Line Metro train. After gutting the victim, Spires proceeded to rob the rest of the passengers, who watched the brutal murder without interfering. To top off the year, just before this past Christmas, a man was mugged and beaten by a group of unruly teens on the same Metro line (the media isn”t reporting the race of the attackers, but you can guess it).

All along the Potomac, civility is crumbling. The Washington Times reports that the District has seen an uptick in homicides by 54 percent over the past year. The majority of these murders occur in the city’s Wards 5, 7, and 8″which are the poorest, most economically challenged in the city. Local officials say there is no one reason for the bounce in the homicide rate, even though common sense says the Ferguson Effect”that is, police being more reluctant to patrol and deter crime due to fear of intense scrutiny from the public”might have something to do with it.

Why crime is spiking in the nation’s capital is an important question. But I”ll leave that to the experts to answer. What’s needed is a solution to the rampant delinquency. And when I say “solution,” I”m not referring to a dewy-eyed reform effort; I mean a real, gritty solution to the disorder that surrounds Capitol Hill.

In a nutshell, we should be forcing elected representatives to police the streets of Washington, D.C., themselves. That’s right: Give them guns, bulletproof vests, and the authority to lock up ne”er-do-wells. Make them leave the protective walls of Congress and do the dirty work of crime fighting.

This all sounds crazy, right? Politicians are elected to enact laws, not enforce them. Doesn”t having legislators adopt badges and nab crooks violate the Constitution’s separation of powers?

Setting constitutionality aside for a moment, consider our dearth of options.

We already know that aggressive policing is capable of bringing crime to its knees. Just ask anyone who lived in New York City before the mayoralty of Rudy Giuliani. Alas, suggesting that cops do more to not only prevent crime but express an intolerance for disorder won”t fly in our super politically correct epoch. Stop-and-frisk is racist. Shooting down an unruly thug is murder. Asking the boys in blue to do their job and keep society functioning is asking for a barrage of hateful email and polemics from SJWs without full-time employment.

That’s why I”m proposing such a novel solution to D.C.’s slow descent into barbarism. It won”t be pretty, but I”m convinced the only way to get federal lawmakers”the guys and gals tasked with ultimate jurisdiction over the District“to pay attention to the crisis in their backyards is to get them personally involved.

Anti-neoconservative voices in the media invoke the very same principle when they impugn the tough talk lawmakers like to espouse when it comes to fighting terrorism. Former CBS Evening News anchor Dan Rather most pointedly conveyed this sentiment in a CNN interview two summers ago when civil strife in Syria and Iraq was heating up. In response to congressmen’s calls for saber rattling”a redeployment of troops back to the Middle East to root out American-killing Islamists“Rather said, “I will hear you out if you tell me you are prepared to send your son, your daughter, your grandson, your granddaughter to that war of which you are beating the drums. If you aren”t, I have no patience with you, and don”t even talk to me.”

Watching American journalists have their heads cut off by ISIS madmen is indeed a tragedy that requires a response. But compare those deaths with heartless murders that occur in America’s inner cities. In the past two years, Islamic State savages are responsible for the deaths of nearly 100 journalists”including four Americans. There were 162 homicides in Washington, D.C., this past year.

People are losing their lives halfway across the globe. But our fellow citizens are losing their lives at home. The safety of the latter should outweigh that of the former. As St. Aquinas wrote, “we should love our kindred most, in matters concerning relations between citizens, we should prefer our fellow-citizens….” The chances of being killed by a terrorist are nil compared with my being robbed on my morning commute. So it only makes sense for elected officials to focus more of their energy on rooting out the disarray right in front of their noses.