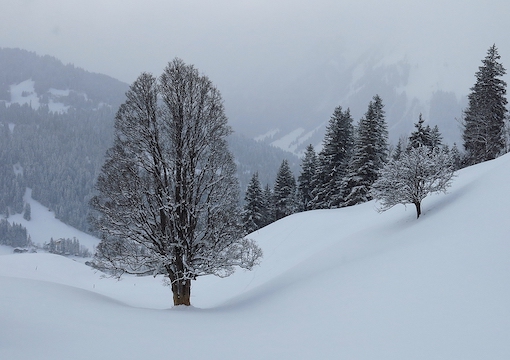 GSTAAD—I have not experienced such a long, continuous blizzard ever, and I’ve been coming here for 63 years. The ski lifts are closed, as are the hotels, and it’s been dumping for a week nonstop. My Portuguese handyman Fernando now lives on his snow plow, clearing the private road that leads to the house, as useless a task as trying to bail out the Titanic. By now I should be in London, enjoying my new rented house in Glebe Place; instead I’m housebound and snowed in, a modern Prisoner of Zenda without the Ruritanian uniforms.

My only worries are the conditions that cause avalanches, and my son’s insistence to keep skiing every day. That boy now simply ignores everything I say and drives away muttering something about old people being scared. If I could catch him I’d teach him a sharp lesson, the trouble being he’s among the fastest skiers in the region, and I’m now among the slowest. He also has the nasty habit of leaving his dog with me and disappearing for the day, turning me into a walker, or whatever those people are called who walk dogs for money.

This is Mother Nature giving us the middle finger. The lifts have stopped in France, Italy, and Switzerland, the resorts are closed, and she’s dumping as if this were Stalingrad. I don’t blame her. Until 150 years ago she was left alone in the Alps to organize her fauna and wildlife. Birds and furry things were undisturbed, and when there was thunder and lightning the two-legged creatures below thought they were dragons spitting fire at each other. Then some Brits kept going up higher and higher, some Swiss built hospitals and hotels, then came rich tourists; finally the proverbial you-know-what hit the fan. Mass skiing is to alpine nature what speedboats and those ghastly Jet Skis are to once-tranquil sandy beaches.

“Champagne was always waiting on ice, and it always revived a weary New Year’s Eve celebrant.”

Two hundred years ago, just as the Greeks rose up against their Turkish oppressors (25 March), the first Gstaad inn also started to rise. It was made out of wood, of course, and the village’s first post office was located there, so the inn was named the Post Hotel. It is my favorite restaurant by far, and I’ve been friendly with three generations of the Widmer family, which has owned it for a century. On Friday evenings carpenters and farmers gather at the communal table and create a nostalgic atmosphere with their yodeling and beer drinking. Papa Hemingway spent some time there when he climbed with skins and slid down the Wasserngrat after emptying a couple of bottles of Swiss white wine, but when years ago I asked for a plaque to be put up, they said Monsieur Hemingway lived in Rougemont and rarely visited. I dropped it. They were thinking of my friend Jack Heminway, without the g, who did live nearby but preferred the Palace. I lunched every Jan. 1 at the Post Hotel with the King of Greece and Aleko Goulandris, a tradition that was decades long and ended with Aleko’s death a few years ago. Those were great lunches because I would arrive with very little sleep, and sometimes with no sleep at all, to the great amusement of my two friends. Champagne was always waiting on ice, and it always revived a weary New Year’s Eve celebrant. Alas, one more tradition down the drain.

With three days to go before my departure for London, I gave a dinner party in honor of Tim Hanbury, who was not present. The Cornet twins were, however, and their mother literally owns Stella Artois, which Timmy drinks a minimum twenty cans per day for the past thirty years and has not added a milligram of weight. The twins want to hire him as the perfect-specimen ad, but I told them that Timmy owns 2 to 3 million acres and hence is independently wealthy. Mark Lloyd, Anthony Bingham, Lara Livanos, Patricia Wallentin, and my son and heir made eight for dinner, but everyone present except my boy had been vaccinated or had had the virus. This is the good news.

The bad is that I’m in trouble yet again with Charlie the driver. You may recall that he and his wife did not appreciate my joke about all the hookers who knew him by his first name when he waited in a tiny hamlet while I went up by mini-train to Wengen. Last week as he was taking me to Bern for my second shot he noticed a pretty French maid in my kitchen and commented that he found her very attractive. “As she does you,” I told him. That got him all agitated and he asked what did I base that on. “She mentioned how attractive you are for a mature man,” I told him. “And what did you say to her?” said Charlie, gulping for air. “Well, I told her that yes, lots of women find you attractive, but you are true to your boyfriend and never stray, as you are 100 percent homosexual.”

Charlie fell for my tale and lost it, and while gesticulating wildly he almost went off the road. “I didn’t want to have any trouble with your wife,” I told him, and then went in and got my second shot, and now I’m on my way to London and the loving arms of my wife. But Charlie is making faces and the French maid thinks I’m a s— stirrer.