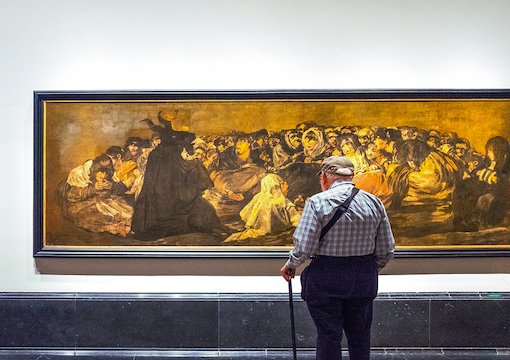 Interviewed recently about COVID-19, a subject on which I am now, like only 1,500,000,000 others in the world, an expert, I was asked as a last question whether I thought that any good would come of it. I am afraid I was not quick enough (I am getting on in age) to answer, “The end of mass tourism.”

Now of course I understand that my answer, if I had given it, would have sounded callow and snobbish. I believe that tourism is one of the largest industries in the world, if not the largest, and millions of people must therefore depend on it for a living. For them, the end of tourism would be a personal catastrophe. But the fact remains that, as far as I am concerned, most places worth going to are not worth going to because of the numbers of people who go to them. A crowd can turn a paradise into a hell.

No one can be certain of what the future will bring, and one must never underestimate the power and effect of amnesia in human affairs: What obsesses us now may be forgotten tomorrow, and insofar as lessons are learned from experience, they are often the wrong ones. But for the moment it does seem as if air travel in its pre-COVID incarnation is unlikely to resume precisely as before. The middle seats of rows may be removed; cheap flights, which made it as cheap to cross half the world as to take a taxi to the airport, will be a thing of the past. Airports that had passing through them every year the equivalent of the population of a fairly large country will be much less crowded or frequented, and no future passenger will be much the unhappier for it. I have met no one who said, “I am really looking forward to going to the airport because it has such a lovely atmosphere and it is delightful to mix with such crowds of people.”

I have always found mass tourism a little puzzling. To go to the effort of traveling, which is increasingly onerous and unpleasant, and then to demand the same kind of food as you have at home seems distinctly odd to me. Cultural tourism is a bit odd too. People who don’t give a moment’s thought to the visual arts for, say, three hundred and fifty days a year suddenly experience an urge to join a procession, a bit like those caterpillars that congregate by the million and devastate the countryside, through a famous art gallery, say the Louvre. They make a beeline for the pictures they have been told to make a beeline for, and when they get there they can’t see them for all the others who are doing the same. It can’t be enjoyable; it is more like performing a bureaucratic duty, like ticking off a box on some footling form devised by a committee of bureaucrats. Compared with this, coal-mining must be fun.

“A crowd can turn a paradise into a hell.”

I was once alerted to the absurdity of mass cultural tourism by something I noticed in the Prado in Madrid, which is my favorite of all the large art galleries. When El Coloso was thought to have been by Goya, large and reverent crowds of people gathered before it and tried to have exquisite feelings, as they were supposed to have whenever they found themselves in front of a certified masterpiece.

But then art historians at the Prado made a discovery: that El Coloso was not by Goya after all, but by an inferior follower of his. Not only did the art historians discover this important fact, but they said that the picture was obviously not by Goya—though, apparently, it had not been obvious to anyone for two hundred years. Obviousness, like beauty, is in the eye of the beholder.

Having been demoted to an inferior status, the picture was physically removed from its place of honor to a more modest location in a corner, where it then attracted no attention whatever. No more did crowds stand before it reverently, having sublime feelings. On the contrary, people walked past it as if it were no longer worthy of the slightest notice. It had been taken off the list of things to see, so to speak.

This strange change in the picture’s fortunes, or status, naturally caused me to wonder what had drawn such crowds to the picture in the first place. Of course, it is a dramatic, even melodramatic, work of a kind to attract the salacious or even the vicious. But if that had been its principal attraction, it would still be just as attractive, for the picture itself had not changed. What had changed was the withdrawal of its good housekeeping seal of quality. It was no longer on the list of things that one must see before leaving the Prado, Madrid, Spain, or Europe.

Poor tourists (of the Prado-visiting kind)! They are not really enjoying themselves at all; their tourism is but the extension of office work by other means. If the increase in airfares consequent upon the epidemic releases them from their terrible duty to perform sightseeing duties so far from home, at such great effort and with neither pleasure nor instruction to show for it, the virus will at least have done some slight good for human welfare, infinitesimal as it may be by comparison with the devastation it, or our response to it, has caused.

There has been a lot of slightly unctuous commentary recently about how the lockdown has taught us that many of the things that we previously thought were essential to our lives were actually of no importance whatever. From now on we shall live more simply, they say, our values will be better and less materialistic, etc., etc.; in short that, were Pascal to return, he would no longer be able to say that the problems of the world derived from our inability to stay quietly in a room, because we are now perfectly able to do so thanks to our recent experience of isolation. I don’t really believe it. Nothing, especially improvement, is forever, and most things aren’t even for very long. Mass tourism will one day be back—alas.