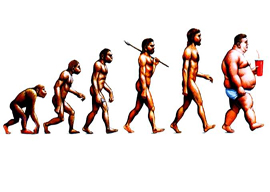 Did life evolve by purely natural processes? Could random mutation and natural selection really generate the human brain or the electrosensory system of the duck-billed platypus? Or did an intelligent force shape our universe?

Am I a total retard for asking?

As of April 20, Tennessee teachers will be allowed to address these nagging questions without fear of reprisal. Gov. Bill Haslam reluctantly allowed HB 368″known to sneering progressives as the “Monkey Bill“”to pass without his signature. The law will permit teachers to

For secularist busybodies, the law’s innocuous wording translates to brazen promotion of Young Earth creationism, climate-change denial, and (I’m guessing here) the imminent genocide of android clones. The prevailing fear seems to be that kids will devolve into superstitious, knuckle-dragging homunculi if they aren’t fed a strict diet of unquestioned Darwinian evolution.

With every new story, I imagine some lisping liberal trying to pronounce “creationists” without biting off his own tongue:

Tennessee Enacts ‘Monkey Bill’ To Dumb Down Kids In Biology And Physics, Undermine Their Future

“Politically correct science writers insist that innate racial differences have long been discredited, yet they steadfastly deny intelligent design. To them, evolution is a fact”except for human biodiversity.”

…the thrust of the proposed law would elevate creationist theories about human evolution to the same status accorded by most educators to Darwin’s research.

It hardly matters that the bill clearly states:

This section only protects the teaching of scientific information, and shall not be construed to promote any religious or non-religious doctrine, promote discrimination for or against a particular set of religious beliefs or non-beliefs….

Hand-wringing intellectuals aren’t buying it, and their opinion pieces imply a theocratic conspiracy. The same buzzwords appear in article after article: anti-evolution, anti-science, creationism. Tennessee’s students will lack scientific literacy, they warn. High-tech industries will be repelled from our state. Disparaging “redneck” jokes will be told at snooty cocktail parties. (Why can’t Tennesseans jerk off?…Because they haven’t evolved opposable thumbs yet!) Only an inbred mongrel would question neo-Darwinism’s materialistic assumptions.

The problem is that there is no important “scientific weakness” in the theory of evolution that could scientifically undermine its essential truth.

Intelligent-design theorists have tried to disassociate their movement from biblical literalism and its bastard stepchild, Young Earth creationism. Judging from the headlines, their attempts have failed.

In its purest form, intelligent design offers no specific religious claim. It does not rule out universal common descent, natural selection, or macroevolution (i.e., the evolution of new species).

ID theorists argue that complex organ systems and cellular machinery could not have originated from known natural processes. They claim the most plausible alternative is intelligent design”presumably by benevolent deities, demonic demiurges, extraterrestrials, or clockwork elves. Just as archaeologists distinguish man-made arrowheads from stones or SETI astronomers scan space noise for intelligent patterns, so biologists can detect intelligent causes in organic structures.