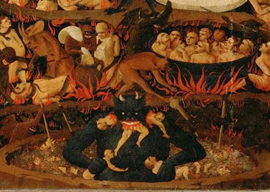 NEW YORK—Pope Francis was chatting with a flamboyant Italian journalist named Eugenio Scalfari several months ago, and in the course of chewing over the eternal verities, presumably while sipping some appropriate Tuscan wine, the Pope said something that Eugenio heard as denying the physical existence of hell.

Two things here. First of all, I think it’s wonderful that the Pope fraternizes with celebrity reporters—it shows he’s not only relevant but fearless—and in fact I would suggest that the Vatican press office introduce His Holiness to Instagram, just for the numerous photo ops where he’s sprawled on a couch taking selfies that can later be sold to People magazine.

But the second thing is more weighty. I know we all follow the theological debates within Catholicism about which saint got in touch with which angel to channel which biblical dead person—don’t they have a show on CNN that goes over each week’s highlights?—but one thing you never do, in Catholicism, Protestantism, or Pentecostal Snake-Handlingism, for that matter, is say there’s no hell.

Because that would be Jewish. The Jews have never cared that much about hell. They grudgingly admit that it’s probably there, but it’s just this place that, after you die, you feel intense shame before God for all the times you yelled at your wife or failed to stuff two dollars into the self-parking kiosk. The Hebrew word for hell is “Gehenna,” which is the name of the garbage dump outside Jerusalem that (a) smelled bad, and (b) was always on fire. I can imagine generations of parents using it as a threat to their unruly children: “If you don’t straighten up right this minute, I’m gonna throw you into the smelly garbage dump with the smoke cloud over it!”

So when the Christians come along, they take Gehenna and run with it. They use the name Gehenna to mean hell, and that’s not just trash burning out there, it’s demons and human souls, and it burns forever because it’s mixed with brimstone, which does indeed smell bad when you burn it. Actually brimstone turns red and burns blue, so if you’ve got brimstone out there, you’ve got a blood red gelatinous mass with a blue flame, or what the great preachers call…

The Lake of Fire.

“If you really wanna scare people into doing the right thing, show them what happens when everything becomes bluescreen.”

The only time I can remember seeing an actual lake of fire was in the late ’60s when the industrial pollution in Cleveland got so bad that Lake Erie burst into flames and smoldered for several weeks. If you were thrown into the Lake Erie lake of fire, you would probably just stick to the muck on the surface and die of smoke inhalation while you think, “I wonder if my body will go over Niagara Falls or get flayed into a million pieces by a hydroelectric turbine.”

Which is pretty hellish, but as a general rule, lakes don’t burn and so this combination of sulfurous liquid coating your body while you try to hose yourself down before little patches of tar can burst into flame all over your legs, torso, and head…this is a strange way to describe God’s displeasure. The main point, apparently, is that it’s nasty. Gehenna smells bad, it’s got God-knows-what all over it, it’s the last place you wanna go.

So why don’t we have more details about it? We don’t normally even think about hell unless some artist or novelist or poet describes it for us, because all the popes and church fathers and reformers—when asked the question “Where do I go when I die?”—have been annoyingly vague about the answer.

They all agree on the basics. There are two places. God is in one place. That’s where you wanna go. But God is not in the other place—if you go there, you’re flying solo for the first time—so the definition of hell is being separated from God. (This is actually all the Catholic catechism says about it. There aren’t any additional paragraphs describing pitchforks, devils, or cosmic ovens.) And the words used to describe exactly what the Lake of Fire is like are boringly predictable:

The Mormons have an interesting take on hell. Instead of going directly there, you can choose Spirit Prison. It’s like taking an “Incomplete” in life and going to summer school so you can redo your homework and avoid hell. But there’s still a catch: You don’t get to be saved in the First Resurrection—you have to wait a thousand years for the Second Resurrection, and then God will forgive your sorry ass. (The Mormons tend to make things more complicated.)

There’s actually one fairly clear description of hell in the annals of theological discourse, and it comes from an obscure third-century lawyer named Marcus Minucius Felix, who described the Lake of Fire like this:

The clever fire burns the limbs and restores them, wears them away and yet sustains them, just as fiery thunderbolts strike bodies but do not consume them.

Fairly graphic, but still not as scary as Lake Erie in 1969.

At any rate, the reason the Catholic press got their cassocks in a bunch is that, over the past half century or so, a lot of theologians have been saying, “Maybe we got the whole hell thing wrong.” They’ve looked back over the appropriate scriptures and decided that, after you die, you don’t get thrown into the flaming garbage dump, you just vanish from all human history, as though you never existed. There’s no memory or trace of you, you’re erased from the universe.

And this might be what the Pope said he believes. After Eugenio reported their conversation, the Vatican scrambled around and issued statements saying that, no, the Pope didn’t go outside the catechism and they were just chewing the fat and please everybody let’s not get carried away. Yes, Gehenna is real. Yes, the Pope believes in hell. Yes, the Pope is Catholic.

Because Annihilationism—the fancy name for being erased from the universe—is a concept normally endorsed only by fringe groups like Seventh-Day Adventists and Jehovah’s Witnesses and the unsung sect called Christadelphians. (To be fair to the Adventists, they actually believe in both concepts: The all-consuming Lake of Fire burns you up and then everybody forgets you.)

The only thing worse than being an Annihilationist, in Catholic circles, is to be a Universalist. A Universalist believes that God is basically a nice guy and so everybody gets saved after death; nobody gets burned up in the Lake of Fire, we all spend eternity ordering desserts at Applebee’s together. Group hug. Most preachers hate this idea with a passion. It takes away all their best material.