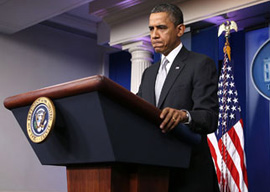 A roundup of news items from last week (and a few tidbits from the week before).

HOME
The White House Press Corps whined about having “absolutely no access” to Barack Obama. Less than a day after The New Republic called for a boycott of the annual correspondents” dinner, the president found enough time to hold an off-the-record meeting with top White House reporters. … The New York Times Company is selling The Boston Globe, and the conservative weekly Human Events is also for sale. … Ann Coulter appeared on Stossel and told his audience that most people think “libertarians are pussies.” … A reporter at the New York Daily News admitted that he started the “Friends of Hamas” rumor while conversing with a Republican congressional aide. … A pro-gay-marriage group edited video footage of the Bush family into its national advertising campaign, which recently aired on CNN and MSNBC. Former First Lady Laura Bush requested that she be removed from the advertisement, as she had not given any permission to use her likeness. … The Associated Press revised its rulebook to approve the journalistic use of “husband” and “wife” when referring to same-sex marriages. … A Florida state prosecutor got canned after flashing his badge at a strip joint to evade a 15% surcharge on credit cards. … The city of Baltimore paid outside consultants nearly $600K to produce a study instructing the government how to save money.

“The city of Baltimore paid outside consultants nearly $600K to produce a study instructing the government how to save money.”

ABROAD
Sen. Lindsey Graham told a roomful of constituents that US drone strikes have killed 4,700 people in the Middle East since 2007. Graham’s number is about 1,200 victims higher than averages compiled by Micah Zenko of the Council on Foreign Relations. The CIA and Pentagon have kept their casualty estimates under close wraps. A spokesman clarified that Graham, who sits on the Senate Committee on Armed Services, was citing independent analyses and did not inadvertently reveal any official record. … An Iranian graphics company was caught Photoshopping “proof” of Ahmadinejad’s newest fighter jet. … The Australian Electoral Commission filed Julian Assange’s application to run as a Senate candidate. Assange says that a victory in September will compel the US to drop its espionage investigation. He will run under the WikiLeaks Party. … The Ecuadorian government, which granted Assange asylum last year, tapped convicted American hacker Kevin Mitnick to secure its elections. … Mexican drug lord JoaquÃ­n “El Chapo” GuzmÃ¡n was resurrected after reports of his death in a shootout proved baseless. … Murder suspect Oscar Pistorius was granted $113K bail by a South African magistrate who deemed the double amputee not a flight risk.

ONLINE
Playboy plans to release its first iPhone app this winter. In alignment with the puritanism at Apple, all content will be nudity-free. … The porn industry hopped on the viral bandwagon with its personal rendition of the “Harlem Shake,” featuring eight naked starlets and an overly confident pizza-delivery man. … Donald Trump’s Twitter feed read, “These hoes think they classy, well that’s the class I”m skippen,” but Trump claimed the account was hacked. … Hackers also targeted Burger King’s Twitter feed, adding a McDonald’s logo to its biographical section with a message asserting that the company had been sold “because the whopper flopped.” … Czech student Karel BÃ­lek packed all of The Pirate Bay’s content into a single 75MB file that users can download as a backup in preparation for the website’s potential shutdown. The Pirate Bay is threatening to sue the Finnish organization CIAPC for using similar information in a recent anti-piracy campaign. … Internet daters are angry that the math majors behind OkCupid are selling sensitive data to advertisers through its new venture Combosaurus. … Georgia Rep. Earnest Smith proposed legislation prohibiting the electronic imposition of someone’s face “onto an obscene depiction.” Reddit had a field day imposing his face onto obscene depictions. … The White House pointed at LulzSec as a threat to national security for conducting “economic espionage” against the US.