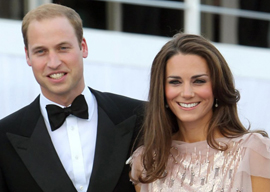 Duke and Duchess of Cambridge

HOME
Officials in NYC found that nearly 80 percent of the city’s public-school graduates had to relearn basic reading, writing, or math after arriving at community college. … A seven-year-old Maryland boy was suspended from school after chewing his strawberry tart into the shape of a mountain, which his teacher thought looked too much like a gun. The school sent out a letter offering to counsel any students whose lives were turned irrevocably upside down by this heinous and inconsiderate crime. … Florida Sen. Audrey Gibson introduced legislation prohibiting the sale of ammunition to anyone who hasn”t completed an anger-management program. … The Southern Poverty Law Center claimed in a new report that the number of anti-government extremist groups reached an all-time high in 2012. … Attorney General Eric Holder told Sen. Rand Paul that he could imagine using drone strikes on American soil only under “an extraordinary circumstance.” As a result, Paul carried out a 13-hour filibuster of John Brennan‘s nomination to the CIA director post. The Wall Street Journal wrote that the filibuster did nothing but “fire up impressionable libertarian kids.” After Sen. John McCain quoted the WSJ in his rebuke of Paul’s strategy, the two senators shared an awkward elevator ride downstairs. … A New York courtroom charged a Julio Acevedo with killing a young pregnant woman and her husband. Acevedo previously served time for murdering the original “50 Cent” in 1987.

“Hugo ChÃ¡vez bit the dust. By God’s grace, Venezuela has not collapsed into complete anarchy.”

ABROAD
Hugo ChÃ¡vez bit the dust. By God’s grace, Venezuela has not collapsed into complete anarchy. Iranian President Mahmoud Ahmadinejad, who attended the funeral, expressed confidence that the Latin American leader, like Jesus Christ, will return to Earth. … The Toronto Star, Canada’s highest-circulation newspaper, is outsourcing its copyediting jobs to save about $37,000 per editor each year. … Wild speculation arose after Kate Middleton asked a woman who had gifted her with a teddy bear, “Is this for our d”?” before cutting the sentence short. She and Prince William have long claimed that they do not know the gender of their expected child. … The UN Security Council approved new sanctions against North Korea. Kim Jong-un threatened a preemptive nuclear strike against the US in retaliation. … Al-Qaeda spokesman (and Osama bin Laden’s son-in-law) Sulaiman Abu Ghayth was turned over to US officials in Jordan. He had pled not guilty to one count of conspiracy to kill American citizens. … Justin Bieber, who is Canadian, lashed out at a photographer in London who told him to “fuck off back to America.”

ONLINE
US Rep. JosÃ© Serrano Tweeted that Hugo ChÃ¡vez “was a leader that understood the needs of the poor [and] was committed to empowering the powerless.” Serrano proposed legislation in January to abolish presidential term limits. … The Washington Times obtained an internal USDA email in which officials requested that the agency’s management of spending cuts not contradict its public claims about the sequestration’s potential impact. … Archivists released a rare video of Ron Paul sporting an AR-15 in 1989. … Twitter users mentioned Rand Paul more than 400 times per minute during his 13-hour filibuster. Young Americans for Liberty sparked the viral #DieWithMcCain trend after the Arizona senator’s critical comments on the House floor. Others joined in with #PrimaryGraham, a subtle campaign taunt toward McCain’s partner in crime. … The federal trial against Anonymous spokesman Barrett Brown has been delayed another six months pending his lawyer’s further review of evidence. … A reporter at paidContent caught an intellectual-property lobbyist commenting as three different people on an article lambasting NBC’s issuance of 3.9 million Digital Millennium Copyright Act takedown notices. … An attempted Dunkin” Donuts robbery was foiled when one of the company’s employees doused the perp in searing-hot coffee. Loyal to the brand, she screamed at him to “Go run on Dunkin”!” as he ran away.