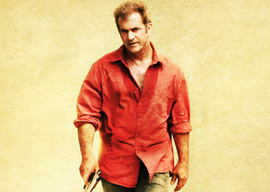 Among literary critics, a controversy has been raging tepidly over what purpose reviewing might hold in this age of crowdsourcing. Why rely upon one fallible pundit’s thumbs up or thumbs down when you can access the wisdom of crowds by averaging dozens of ratings, whether elite or mass?

As a 21st-century movie reviewer, I’ve always found this catcall hard to dismiss, which is why I try to only write about movies where I can explain something more interesting than whether I liked it or not. While I take a backseat to no one in admiration of my own taste, I have to admit that the aggregation sites are reasonably reliable.

Consider Mel Gibson’s new crime movie Get the Gringo, which debuted in Israeli theaters back in March but is finally out now on Netflix and DVD here in the land of the free and the home of the brave. Mel plays a California bank robber similar to his tough-guy character in 1999’s Payback. With a car full of cash, he makes a run for the Mexican border like an outback O. J., only to find a large fence has recently been erected. After crashing through, he’s sentenced to Tijuana’s hilariously vibrant El Pueblito prison, a pre-apocalyptic wasteland reminiscent of Bartertown, the free-market dystopia in Mel’s Mad Max Beyond Thunderdome.

“Mel Gibson is almost the only figure in Hollywood engaging imaginatively with a vast topic of ever-growing importance in American life: Mexico.”

Get the Gringo enjoys a solid 80% positive rating among 51 critics on Rotten Tomatoes and a 7.1 score from over 30,000 viewers on IMDb.com.

Those numbers seem right to me. Get the Gringo is efficient, funny, quick, and thoroughly entertaining. It’s not quite Lethal Weapon or Road Warrior, but it’s far above the average 2012 film and wittily recapitulates Mel’s career.

So what’s the point of reviewing competent commercial films such as Get the Gringo?

Well, who else is writing about it? A glance at its Rotten Tomatoes page shows that Get the Gringo has not been reviewed by any “Top Critics” outside of the two trade papers.

In other words, Gibson has been more or less blacklisted by the media.

As you may recall from the dozens of documentaries about the horrors of Hollywood refusing to work with communists during the 1950s, blacklisting is the worst sin imaginable. But this is totally the opposite of the bad kind of blacklisting because, you see, Gibson is not a Stalinist.

Which I guess is too bad, because Mel Gibson is almost the only figure in Hollywood engaging imaginatively with a vast topic of ever-growing importance in American life: Mexico.

In this century, that nation of 150 million”35 million of whom live in the US”has receded from the American imagination. Although Mexico has been undergoing a horrifyingly bizarre civil war just over the border for the last half-dozen years, the whole country strikes well-bred white Americans as…inappropriate. Mexican mass-market films, such as El Infierno, 2010’s hit satire about the narco war, almost never get released here. Heck, Iranian movies are more likely to make it into theaters in Los Angeles.

A half-century ago, Mexico”violent, superstitious, and accommodating”fascinated certain American filmmakers. The chief remnant of this old breed, formerly found widely among Catholics (for example, John Ford and John Wayne) and Californians (Sam Peckinpah) is Gibson.