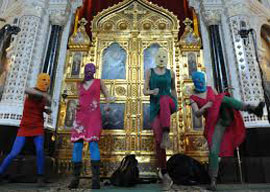 The culture war has gone global.

And the divisions are not only between, but within nations.

“I have no patience for countries that treat gays or lesbians … in ways that intimidate them or are harmful to them. … Nobody is more offended than me by some of the antigay and lesbian legislation that you’ve been seeing in Russia.”

Leno and Obama were referring to a new Russian law prohibiting “homosexual propaganda.” Moscow is also warning foreigners, including visitors to the winter Olympics in Sochi, that propagandizing for gay rights can get them two weeks in detention. No kiss-ins allowed.

“Medieval,” howled The Washington Post. “Mr. Putin’s war” on gays and lesbians is “part and parcel of his lapse into xenophobia, religious chauvinism and general intolerance.”

Monday’s New York Times has a front-page story—“Gays in Russia Find No Haven, Despite Support From the West”—featuring photos of roughed-up protesters.

“When the ultra-Orthodox haredim of Jerusalem denounce the annual gay pride parade in the Holy City, whose side is America on?”

Our moral and cultural elites have put Putin on notice: Get in step with us on homosexual rights—or we may just boycott your Sochi games.

What this reveals is the distance America has traveled, morally and culturally, in a few short years, and our amnesia about who we Americans once were, and what it is we once believed.

Only yesterday, homosexual sodomy, which Thomas Jefferson said should be treated like rape, was outlawed in many states and same-sex marriage was regarded as an absurdity.

Was that America we grew up in really like Nazi Germany?

In the Catholic schools this writer attended, pornography—let alone homosexual propaganda—would get one expelled.

As Father Regis Scanlon writes in Crisis magazine, in 2005, Pope Benedict XVI reiterated Catholic doctrine that homosexuality is a “strong tendency ordered toward an intrinsic moral evil,” an “objective disorder.” That homosexual acts are unnatural and immoral remains Catholic teaching.

Thus, if we seek to build a Good Society by traditional Catholic and Christian standards, why should not homosexual propaganda be treated the same as racist or anti-Semitic propaganda?

We can no longer even agree on what is good and evil.

When Pope Francis said, “Who am I to judge?” he was saying that a sexual orientation is something over which an individual may have no control, dating to birth or infancy. Hence homosexuals ought not to be condemned, but welcomed into the community.

As for homosexual propaganda and acts, that is another matter.

What, one wonders, is the view of those Evangelical Christians who sustain the Republican Party on homosexual propaganda in the public square? Do they agree with the Post? Or do they agree with Putin?

When the Socialist regime of Francois Hollande enacted a law endorsing same-sex marriage, a million Frenchmen marched in protest in Paris. Is America on Hollande’s side, or the side of the protesters?