Praying for a Black Pope 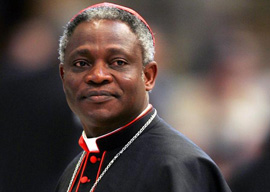 Let us pray that the next pope is a black man. Better still, let it be a black African born and bred in the heart of the Dark Continent near the source of one of those massive snake-like rivers. The less contaminated the new pope is by the dominant Euro-USA secular liberal-left mindset, the better it will be for normal people everywhere, Catholic or not. So the blacker the pope, the better the chances not just of driving the liberal left bananas, but driving it out of the citadels of culture which it captured back about 1962.

Normally, popes are Italian. But they don”t have to be, thank God. The last two popes have been non-Italian Europeans: a Pole and a German.

John Paul II, with his immense charisma and personal knowledge of what it means to live in Soviet Bloc Poland, saw off communism.

Benedict XVI, with his immense intellect and his emphasis on the power of reason and the purity of tradition, has attempted to see off communism’s equally toxic derivative: moral relativism. But now he has announced he is to resign, aged 85, old and exhausted, after not quite eight years, with the battle barely commenced.

“Who better to tell white liberal lefties to fuck off than a black pope?”

He will retire at 8PM on February 28th and his intention is to live as a recluse with his cat “Ciccio“ (fatty) inside the Vatican in a convent of nuns di clausura whose vows mean that they are not allowed to go out of the convent or to meet anyone from the outside world.

“B-16,” as he is nicknamed, made the extraordinary announcement on Monday morning at a routine meeting in the Vatican to a group of Cardinals in Latin, a language many of them did not understand. He said that during the past few months he has lost the spiritual and physical vigor necessary to govern the boat of St. Peter. That same afternoon, lightning struck the cupola of St. Peter’s Basilica. For his was a momentous decision.

A pope, who is not only the spiritual leader of the world’s 1.2 billion Catholics but an absolute monarch, albeit these days only as head of the tiny Vatican state, can voluntarily abdicate under canon law but it has not happened in more than 700 years: The last pope to resign voluntarily was Celestine V in 1296. There then followed the most divided and difficult century ever in Catholic history. Today there are many signs that the 21st century is likely to be as traumatic as the 14th century, and not just for the Catholic Church.

There has never been a black pope, but such a pope might do what no white pope can do anymore: embolden and empower the West’s terrified silent majority, regardless of its take on God. He could enable real public opinion to make its voice heard once again and thus turn back the relentless tide that in the name of that iniquitous modern mantra “the right to equality” is eroding each foundation stone of Western Civilization.

Think about it: Who better to tell white liberal lefties to fuck off than a black pope?

A white pope has huge problems defending what the Catholic Church defines as the “non-negotiable” values, i.e., those core values that normal people, even if not Catholics and even if agnostics or atheists, recognize as the reason why the West was for so long the most civilized place ever to exist.