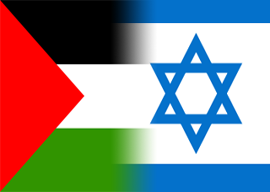 Israel “ Palestine “ President Obama finally articulated last night what we”ve been waiting for since his election in 2008: Israel has to retreat to its 1967 borders. Not surprisingly, Israeli Prime Minister Netanyahu not only rejected the proposal, he demanded an apology from the president. This is a fine state of affairs. The aggressor and recipient of billions of dollars from Uncle Sam demands the good uncle apologize and take it back. There is nothing new in this. Israel has been playing Uncle Sam since its conception in 1948. It has done this by continuing to build illegal settlements on Palestinian lands since 1967, thus changing the map of Palestine “ a sophisticated manner of ethnic cleansing.

Despite the Arab Spring, Likud does not seem to realize or understand that the Palestinians are not animals to be shuffled around, that the absence of dignity and constant humiliation of their people led to the downfall of autocrats like Mubarak, and that this message is getting through to Washington. Still, Netanyahu and his Likud gangsters rely on the American Jewish community to pressure Obama, something AIPAC has been doing for the last fifty years. The final truth is the following: Israel’s Likud does not want peace, and Obama has to realize this and act accordingly.

“Israel has been playing Uncle Sam since its conception in 1948.”

Having said this, the follow up to Obama’s speech makes one feel ashamed to have once voted Republican. The shameless pandering Mitt Romney, the Republican party’s leading presidential candidate for 2012, immediately slandered Obama for “having thrown Israel under the bus.” Talk about kissing Israeli ass. Just as shamelessly, Charlie Rose, a nightly television chat show host, invited Mort Zuckerman, a social climber par excellence and a real estate shark posing as a newspaper tycoon, to his program to denounce Palestinian aspirations. Mind you, New York media types know which way they have to swing “ or else. Instead of producing an editor from Haaretz, Israel’s most respected newspaper, rich hustlers like Zuckerman are paraded in front of the cameras mouthing the usual pro-Likud propaganda.

And they call this country a free and democratic one.