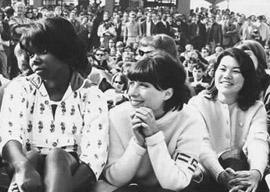 Having just spent a week in Arctopolis, the topic came back to mind. It collided with this news story, which is about American kids of Asian or part-Asian ancestry trying to game the college admissions system by checking the “white” box on application forms.

This is only an intelligent strategy if your surname is not a giveaway. Of mixed Asian-white marriages in the USA, however, three quarters feature a white husband, so mix-raced kids’ surnames are problematic only for the other quarter. (For adoptees, it is hardly ever a problem.)

“Rodney King famously asked: ‘Can we all get along?’ Where big minorities of Tropicals are settled among Arctics, the answer is plainly ‘No.’”

Kids with Asian ancestry want to game the college admissions system because admissions officers discriminate strongly against them when not forbidden by law. As The Center for Equal Opportunity has noted:

In 2005…the combined median SAT scores for blacks [admitted to the University of Michigan] were 190 points lower (on a scale of 1600) than whites and 240 points lower than Asians. Similarly, blacks trailed whites in high school grade point averages by .5 and Asians by .4 (out of a potential 4.0). Over all the years analyzed, 8,000 whites, Asians and Hispanics were rejected who had higher grades and test scores than the median black admittee, including nearly 2,700 such students in 2005 alone.

Where colleges are forbidden by law to discriminate against Asian-ancestry applicants, those applicants are accepted in very disproportionate numbers. This has been the case in California since the passing of Proposition 209 back in 1996 (though not without protest). That law banned consideration of race in state-college admissions. The premier such college, U. Cal. at Berkeley, now has a 40 percent Asian student body.  (Persons of “Asian alone” ancestry are 12.5 percent of California’s population. The state’s entire mixed-race population is 2.6 percent.)

Given that East Asians modestly outscore Europeans on mean IQ and have an “exam culture” transported to the USA as the Tiger Mom and crammer phenomena, this is all to be expected. So how much of a problem is this for the Arctic Alliance project? And for the USA?

For the project, not much. My suggestion was for an alliance, not a political union. Political unions of peoples of different cultures—never mind different races—are simply terrible ideas: Search Google News under “euro.” I believe the Arctic Alliance project can be saved.