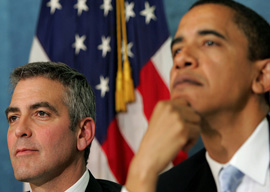 Hollywood’s making a funny new documentary featuring a handful of half-asleep champagne socialists who worship a charismatic government leader and then empty their wallets for his reelection campaign. You can watch the documentary as it’s being made on your nearest television screen.

The most recent scene involves Democratic loyalist George Clooney, who hosted a May 10th fundraising dinner that netted $15 million for Barack Obama’s campaign. Guests who consisted of other Hollywood luminaries paid $40,000 per plate”beating out Will Ferrell‘s measly $35,800-per-plate fundraising dinner”to hear the president talk about his money-fueled revelation about gay marriage last week.

“It’s difficult to glorify presidents whose political ideals involve leaving people alone as often as they possibly can, and that’s why the political right will never have Hollywood on its side.”

Two months ago Clooney and his father were arrested outside of the Sudanese Embassy in Washington, DC. I”m unsure why government corruption in Third World countries still makes the news, but Clooney took time throughout this protest-turned-photo-shoot to thank Obama for his personal commitment. Their relationship goes back to Clooney’s presence in the original photograph used for the 2008 election cycle’s famous HOPE poster.

Whereas Clooney makes these strange, post-platonic advances while out in the spotlight, director/producer Davis Guggenheim worships the Obama Administration from the other side of the camera. Guggenheim”whose credits include the conveniently untruthful An Inconvenient Truth“created a 17-minute documentary the Obama campaign released in March to detail the president’s immense achievements. The campaign continued its big-spending streak by paying an astounding $345,000 to produce the documentary, or a little over $20,000 per minute.

Many other Hollywood celebrities such as Kevin Bacon and Antonio Banderas have stepped forward to support Obama but don”t seem to understand exactly why. Banderas is still stained by his creepy 2008 ad where Obama campaign slogans are interspersed with screenshots of missiles, floods, and distressed polar bears. He referred to his recent experience meeting the president as a “fairy tale.”

Matt Damon says Obama has “rolled over to Wall Street” but says he still plans on voting for him in November. Damon seems knowledgeable, but his obscene partisanship prevents him from developing sane political beliefs that don”t conform to typical left-wing economic theories. At least Elle Macpherson admits she’s a socialist. I admire her openness, but that doesn”t mean she’s not a jackass.