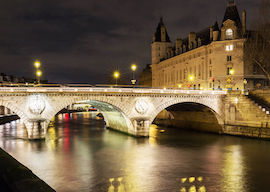 If it hadn’t arrived I’d be dead, but it was hardly welcome: another birthday. Thirty-eight years old on Aug.11, but for any pedant or two, reverse the numerals and you’ll get it right. Thirty-eight came to me as I was sparring with a young whippersnapper from Norway recently. I was out of breath and told him that at 38 I was having trouble keeping up. “You’re doing fine for 38,” he said, and then attacked as if there were no tomorrow, the brute.

What’s that old cliché about being as old as you feel? I’ve never felt younger, but I have to stop giving advice to people. La Rochefoucauld warned about that, old men giving advice because they can no longer set a bad example. Ouch! I try to be bad at all times, but others do not want to be bad with me. Well, not always, but most of the time. Oy vey!

I just finished a book about the Left Bank of Paris and the writers and artists who worked and played there, and noticed that on my birthday following the two atomic bombs dropped on Japan, the great Albert Camus was the only one to express revulsion and publish an editorial against the savagery of the act. What double standards we hold. We only speak about Nazi crimes but fail to mention the incineration of innocents by us, or the 3 million German women raped by the Soviets.

“I try to be bad at all times, but others do not want to be bad with me.”

Never mind. We have other problems now, but the hypocrisy persists. And gives the lie to the nostalgic fantasy of American goodness. Uncle Sam is the only one to have vaporized innocents after literally having forced Japan to go to war with the embargo he had imposed. And he’s doing it again now with Iran, squeezing the mullahs under orders from Israel and Saudi Arabia, two countries with leaders who deserve each other. Which brings me back to Camus, a man who looked like Bogie but had a soft inside. It took guts to tell the truth and rock the boat in 1945, especially as Uncle Sam had just saved France’s bacon for the second time in twenty years. Nevertheless, Camus denounced atomic warfare. The Yanks were not best pleased.

Nowadays one cannot denounce anything unless it is against Trump, the white race, heterosexual men, and the Catholic Church. A ruthless, unprecedented, and mendacious campaign against the above is relentless and led by the media and the extreme left. Leftists disguised as journalists now post the biggest lies and rage apoplectic against anyone for Trump or Boris, and it will continue until they have gotten rid of both. But not if some of us can help it.

Oh yes, I almost forgot, the N-word is also verboten. Nationalism is now equal to Nazism, if you read fallacious sheets like The New York Times or watch the news. This is what “newspeak” is all about. Good old George Orwell had it right in his magnificent opus that I read in 1951 in boarding school for the sex between Winston and Julia. Take away nationalism, love of country, and tradition, and one lives a trompe l’oeil kind of existence. The kind the left can easily control and manipulate. I see that in New York more than in London. People actually speak softly from the side of their mouths, as if living under an occupation. Then they pour it all out in private. The youngsters are even worse off. One-fifth of those under 18 in the land of the depraved claim they have no friends but that demon contraption they look at all day.

The other irony is that black unemployment in America hit a record low of 6 percent but was ignored by black firebrands in Congress. Blacks in America outperform Sweden, Spain, and Italy in gainful employment, yet such is the propaganda against Trump by activists that a landing Martian would think we’re back in pre–Civil War days. (As I write, news comes in about Jeffrey Epstein’s suicide. I’ll bet everything I own in this world that “they” will hint that Trump had him bumped off. The only column of mine in 42 years that was spiked long ago was about Epstein. I called him a raging pedophile and an assistant editor got scared and killed it. I have never laid eyes on the ghastly Epstein.)

Poor little Greek boy, I’ve had it. Father Time is a real downer. My birthday dinner consisted of old friends, none of them as old as myself. Michael Mailer flew over from New York, redefining friendship in a swoop. Peter and Lara Livanos, Geoffrey and Loulou Moore, Aliki Goulandris, and other close friends gathered round, and the mother of my children told a few white lies about her life with yours truly. My children were on their way with their children so everything was hunky-dory except for the fact that my old buddy from way back, Roman Polanski, could not make it. Roman is in Paris putting the finishing touches on his Dreyfus film, which will show in Venice in September, so we chatted over the telephone instead. It was fifty years and a day since his pregnant wife was butchered along with her friends by the Manson gang, monsters whose rhetoric reminds me of the left-wing trash talk of the present. Roman has never looked for sympathy, and I hope his movie does well. He deserves it.