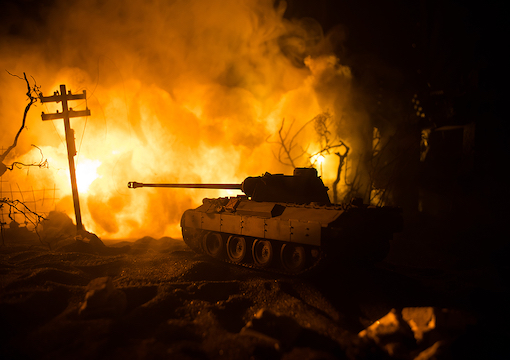 “It is a beautiful spring day,” wrote my grandfather to my mother, “and the sun is shining brightly, but there is no sun bright enough to penetrate the dark clouds that are covering the whole earth.”

He might have been writing about the world today, perhaps, but in fact he was writing in 1942. He was a refugee in Shanghai from Nazi Germany, my mother a refugee in London. I was surprised that letters got through from Shanghai to London in those days, I suppose it must have been through the Red Cross. I was surprised, too, at my grandfather’s command of English (he had won the Iron Cross in the Great War), which I doubt that he had ever written until he had to do so, that is to say from September 1939. My mother never saw her parents again: They both died in Shanghai in 1944, at what I now consider to be no great age.

I thought of his words—it is a beautiful spring day—as I walked through the very pretty garden in my town, with its fine war memorial, earlier today. It was indeed a beautiful spring day, and the sun was shining brightly. The birds, of several different types of song, were singing loudly; a magnolia was magnificently in flower.

“It is more probable that adults these days have to stop their ears from overhearing obscenities from children than the other way round.”

“Fuckin’ ’ell,’ I heard someone shout.

I thought back to my childhood, when football matches were attended mainly by proletarians rather than by bourgeois bohemians pretending to be proletarians. I remember as a 10- or 11-year-old boy on the terraces, whither I had gone to stand with a friend of my own age, hearing someone say, “No swearing, there are children present.”

With this in mind, for there were children present in the garden, I sought out the source of this expletive, with a view to getting him to control himself, but of course it turned out to be a child. It is more probable that adults these days have to stop their ears from overhearing obscenities from children than the other way round.

It’s difficult these days in England to go more than a few yards in a crowded street without hearing this all-purpose but inexpressive verb or one of its cognates. I admit that I am rather prissy in the matter of language, almost ladylike, and if I had to choose a world in which it was never used at all or one in which it was used all the time, I should unhesitatingly choose the former. It is the latter world that is prevailing, however, and if its use were prohibited altogether and the prohibition rigorously enforced, about half the population (or so it seems to me) would be reduced to almost complete silence. It would be like cutting out their tongues.

On the other hand, if complaint were similarly prohibited, and the prohibition rigorously enforced, I should be reduced almost to complete silence—and I am far from alone in this. Complaint is the oil of conversation.

When I realized that the utterer of the expletive in the garden was himself a child, my mind, which with age has become increasingly allusive, returned to the time in Barcelona when my wife and I arrived at a rather grand hotel facing the cathedral. As we arrived, we saw one man chase another, tackle him to the ground, and then, contrary to his human rights, slap his face about a little.

“Quick!” said my wife to the hotel doorman in a uniform with gold braid. “Call the police!”

“Madam,” said the doorman, “that is the police.”

Of course, one doesn’t want a world in which policemen feel that they can slap a man about, even when he has been caught in flagrante delicto. In the abstract, the policeman was wrong to have done anything more than merely apprehend the thief in the gentlest possible way, and slapping his face after his apprehension was not strictly, or even loosely, necessary. In short, it was wrong.

And yet we were all glad of it. The crime, though not major, was probably enough to have scared the victim and to have rendered her a little less secure in the future as she walked in the street. We wanted revenge on her behalf, and the policeman was supplying it. How quickly we descend from high-minded abstractions (the rule of law, human rights, etc.) to rather primitive reactions! Inhumanity is never very far below the surface.

It was a rather short step from thinking about this episode to thinking about the war in Ukraine. Like almost everyone else, I have been very impressed by the Ukrainian resistance to the Russian invasion, and have watched videos of Russian tanks and other vehicles being blown up by drones and anti-tank weapons with something like pleasure. Naturally in these days when images can be so easily faked, I have wondered whether all the videos were genuine recordings of events: The difference between reality and videogames has lessened considerably until it is sometimes difficult to tell the two apart. But still I am reasonably convinced that the pictures of tanks being destroyed are genuine.

It is not only the tanks, however, or the other vehicles that are destroyed, but the people in the tanks and other vehicles. They should not be in Ukraine in the first place, of course, but their individual responsibility for being so must be highly attenuated. Moreover, to find oneself rejoicing over the killing of complete strangers is not an emotion consonant with one’s view of oneself as a moral being. We do not react to these videos simply as recording something regrettably necessary in the circumstances, but with a kind of salacious joy. I do not think that this defect in Man’s character is eliminable.

It is a beautiful spring day, and the sun is shining brightly…