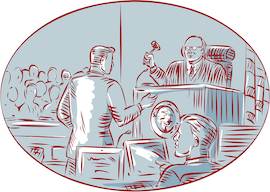 CLEVELAND—Investigation Discovery, the true-crime documentary channel, is running a promo for a new show hosted by a former federal prosecutor, Sunny Hostin, called Truth About Murder, and it has all the usual clichéd cuts and fades spotlighting our intrepid reporter with various expressions of concern, outrage, and determination.

We care about victims.

We will get to the truth.

We will go to new levels of dogged investigation to find previously unknown facts about murder cases.

Except the cases are all finished and done. The conclusions are well-known to anyone who Googles them. The perpetrators are in prison, the cops and prosecutors have collected their kudos, the survivors are “searching for closure.” The only new element is Sunny Hostin riding into town to dig up old evidence and tell the relatives of the victims what heroes they are, hopefully while making them cry on camera.

What bothers me is Sunny Hostin’s claim in the promo that she “never lost a case” as a prosecutor.

I’m sure it’s true, but it’s nothing to be proud of.

I’ve heard other prosecutors make the same claim—I think there’s one, and only one, defense attorney who’s said this—but being proud of having a 100 percent conviction rate shows a fundamental disdain for the rights of the accused and a blindness about how the system is supposed to work. As a prosecutor, you’re not supposed to decide who’s guilty or innocent—that’s for the jury. You’re only supposed to present the evidence in a clear and convincing way. You should feel equally confident and successful if the jury returns a “not guilty” verdict. The outcome isn’t supposed to depend on your personal feelings. It’s not a game. It’s not a competition. The words “won” and “lost” should never be used by the attorneys involved.

Increasingly, though, these murder-porn shows are all about a crusading cop or prosecutor bent on punishment prior to proving guilt. Trey Gowdy, the recently retired congressman and Trump apologist, apparently had quite a run as a prosecutor in Spartanburg, South Carolina, back in the ’90s, because he turns up on Forensic Files all the time, always preaching vengeance and punishment. Joe Kenda, the highly entertaining Colorado Springs detective who hosts Homicide Hunter, talks about criminals, even criminals who have served their time, like bothersome scum he needs to scrape off his shoe. Every time the Innocence Project turns up DNA evidence that exonerates a guy in prison, it takes three to five years to get him out, partly because the courts, the media, and the victims’ families never believe that the cops and the prosecutors could have been so blinded by their own prejudices that they put an innocent man in prison.

The Soviet Union only had a 98 percent conviction rate, and they had laws that allowed the defendant to be prosecuted over and over again for the same crime. Even Stalin admitted that, once in a while, a defendant was innocent. In this country, where we have dozens of innocent people who have turned up on death row, we should be especially outraged by cowboy, or cowgirl, prosecuting attorneys.

“We don’t need another lawyer telling us that prosecutors are always right and defense attorneys are always wrong.”

The way it’s supposed to work—the ideal way it was set up through 800 years of case law—is that all indictments come from a grand jury. The grand jury is made up of prominent members of the community meeting in secret, and they don’t decide innocence or guilt—they just decide whether there’s enough evidence to proceed to trial.

Why take this step?

Because being accused of a crime can often be worse than being convicted of the crime. Many lives were ruined in the ’80s and ’90s during the so-called Satanic Panic. Day care centers all over the country went out of business because of false claims that children were being abused by staff, often as part of satanic rituals. (Not a single satanic ritual ever occurred. It was a modern-day version of the Salem witch hunts.) All of these cases could have been avoided had there been grand juries willing to say “not enough evidence to go to trial”—because there wasn’t enough evidence to go to trial, on any of them.

But we’ve put so much faith in the wisdom of law enforcement that we allow cops and prosecutors to file charges on their own, without any review or, at best, with a rubber-stamp review by a prosecutor “walking the grand jury through the evidence.”

A grand jury is actually the most powerful part of the criminal justice system. A grand jury can take any evidence it wants, can investigate in any manner it chooses, can convene anywhere and at any time it desires, can indict or no-bill with no explanation, and is bound by no rules of disclosure. Maybe this is why it’s been totally emasculated by the guys down at the courthouse. They know who’s on that grand jury and they make sure it’s people who have no idea that they’re actually in charge.

Once the indictment comes down, the prosecutor has an obligation to research both sides of the case and present both sides to the defense attorney. The number of times the prosecution “accidentally” fails to turn over a document, or reveal a witness, is so enormous that the appeals courts no longer overturn verdicts simply because of a single “oversight.” They don’t retry those cases because there are so many of them it would set the court schedules back a hundred years.

Of course, there are other reasons you could say you “never lost a case.”

One would be that you’re a chickenshit. You simply don’t take the hard cases to trial.

Another could be that all the cases settle. Ninety percent of all court cases settle before trial. If you prosecute someone for murder but you settle for manslaughter, you’ve technically “won” the case. If you sue someone for $100 million but you settle for $1 million, you’ve still won. This is another reason the words “won” and “lost” should never be uttered by counsel for either side. (There are exceptions. Springing an innocent person out of prison is such a win/win that everyone on both sides should agree.)

In other words, prosecuting cases is not a sporting event. When you can’t get someone on the crime you think he’s guilty of, so you prosecute him for another crime, you’re not only being fundamentally dishonest, you’re destroying everyone’s faith in the system. (Yes, they did that to Al Capone. It’s still wrong.)

We don’t need another lawyer telling us that prosecutors are always right and defense attorneys are always wrong. Instead of talking about “the accused” and “the suspect” all the time, we should start talking about “the merely accused” and “the mere suspect.” All you “originalists” who love the Constitution and the Declaration of Independence should agree with me, because that’s exactly why we were writing a letter to King George in the first place.