Protecting Biden is a Full-Time Job for the Times 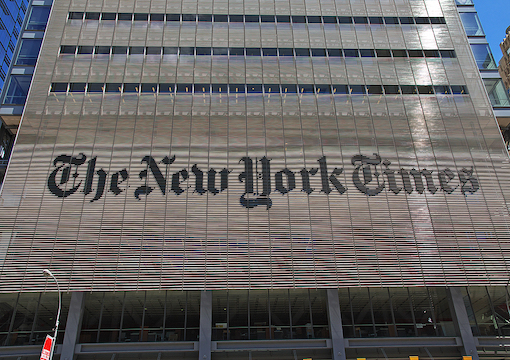 This is an odd line to read in The New York Times:

In “a still-emerging story” (exciting, no?), Project Veritas “worked to expose personal information about the Biden family at a crucial stage of the 2020 campaign.”

Isn’t that what journalists are supposed to do?

Just kidding! As we saw with Hunter Biden’s laptop, the job of journalists is to suppress negative information about Democrats. Instead of reporting news “without fear or favor” — Times founder Adolph S. Ochs, 1896 — the U.S. media now function as the Praetorian Guard for the Democratic Party.

“Instead of reporting news “without fear or favor” — Times founder Adolph S. Ochs, 1896 — the U.S. media now function as the Praetorian Guard for the Democratic Party.”

Still, you’d think the Times would be embarrassed to attack others for doing the reporting they won’t do.

The story was about how Project Veritas got its hands on the diary of the president’s daughter, Ashley Biden. (She’s the good child by virtue of being less of a drug fiend than Hunter.) It was titled: “Ashley Biden’s Diary Was Shown at Trump Fund-Raiser. Weeks Later, Project Veritas Called Her.”

— “The diary’s highly personal contents, if publicly disclosed, could prove an embarrassment or a distraction to her father at a critical moment in the campaign.”

THAT’S NOT JOURNALISM! THAT’S HURTING A DEMOCRAT! IT’S LIKE ANTI-JOURNALISM.

— “[The Project Veritas] caller was seeking to trick Ms. Biden into confirming the authenticity of the diary …”

So? Has the Times heard of Woodward and Bernstein? “60 Minutes”? Journalism?

— “The caller did not identify himself as being affiliated with Project Veritas, according to accounts from two people with knowledge of the conversation.”

I like the “according to accounts from two people …” — as if the Times is describing something really sinister, as opposed to what it was: Project Veritas trying to get Ashley Biden to tell the truth to a stranger.

The greatest journalists ever to walk the Earth (so I hear), Carl Bernstein and Bob Woodward, repeatedly hid their identities from sources, as described in their book, “All the President’s Men.” Bernstein even called Nixon’s chief “Plumber,” Gordon Liddy, pretending to be dirty trickster Don Segretti. They also used insiders at phone and credit card companies to obtain private phone and travel records. Woodward approached grand jurors to try to get them to break the law by revealing evidence they’d heard.

Project Veritas didn’t steal anything. Maybe nobody did. Ashley left her diary behind in a house she’d been renting while in rehab, and a Trump supporter found it. That person later brought it to a Republican fundraiser, then offered to sell it to Project Veritas.

But let’s say the girl who found the diary in Ashley’s rental “stole” the diary. Has the Times ever published anything obtained illegally?

QUIZ: What is the most important event in world history?

What was the name of that case, anyway?

The hero of the Pentagon Papers, according to innumerable books, movies, TV specials, documentaries, poems and folk songs, was Daniel Ellsberg because he stole a highly classified government study of the Vietnam War and gave it to the media.

No skin off my back: The study revealed the mendacity of Democratic presidents John F. Kennedy and (especially) Lyndon B. Johnson in lying to the American public while escalating the war in Vietnam. In fact, I wish all you Ukraine hawks would read the Pentagon Papers right now. Lots of parallels.

But after hearing for my entire life Homeric epics to the Times for publishing the Pentagon Papers, it’s a little odd to have the protagonists of that story bashing a journalist merely for attempting to authenticate a document that may have been stolen by someone else.

That was about lying at the highest level of government! How can you compare Vietnam to the idle ramblings of a reformed drug addict daughter of the president?

Personally, I think Ashley’s diary is far more interesting, especially her showers with dad that she says were “probably not appropriate.” The Pentagon Papers drag a bit.

Anybody remember when a mundane political conversation among Republicans was illegally recorded, passed to a Democrat, and then printed in the Times?

Back in the ’90s, when House Speaker Newt Gingrich was the media’s most loathed biped, a completely random Florida couple (Democratic activists) recorded a private phone call between the then-speaker and his leadership team. The Republicans were discussing what they were and weren’t allowed to say about Gingrich’s impending settlement with the House Ethics Committee.

Asleep yet? Wait until you hear the charges.

In the words of the Times — which wasn’t trying to make the charges against Newt sound boring — he stood accused of “giving untrue information to the Ethics Committee [and of] failing to get proper legal advice about the way he used money from tax-exempt foundations for a college course and televised town meetings with political overtones.”

A college course with “political overtones”??? THE DEPRAVITY OF THE MAN!

But the point is: A perfectly appropriate conversation about the settlement of a nonsense ethics charge was recorded in flagrant violation of the federal wiretapping statute by Democratic activists.

Oh my gosh! I think that’s Newt’s voice! Quick, get out the recording equipment, Alice! Yes, it’s illegal, but let’s do it for “history”!

Alice, who apparently had never heard of “television” or “radio,” but had a high-tech scanner and recording equipment in her car, later explained: “I was so excited to think I had actually heard a real politician’s voice.”

That was another fantastic stroke of luck: The Martins happened to have a tape recorder in their car. They also happened to be flying to Washington, D.C., a few days later, where they personally handed the tape to Gingrich’s main antagonist, Rep. Jim McDermott. He made copies of the illegally obtained tape recording and gave them to the press.

Guess who published excerpts of the illicit recording? Yes! The New York Times!

There were no early morning FBI raids on the Times, the editors thrown in handcuffs, and their phones and computers confiscated — all of which has happened to Project Veritas’ James O’Keefe and his investigators. Nor did the Times seem troubled in the least by the blatantly illegal methods the Democratic activists had used to obtain the tape.

One year later, the Martins each were fined $500, and that was the end of it.

Liberals seem to have no concern that the GOP will ever discover the phrase “turnabout is fair play.” From where I sit, I’m sorry to say, they may be right.