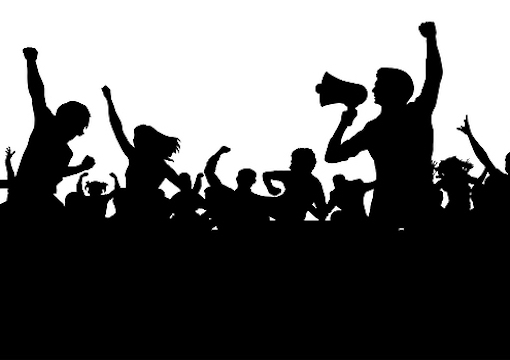 One evening a couple of weeks ago, I happened with my wife to be walking past the Queen Elizabeth II Centre in Westminster, in London, while there was a small but noisy demonstration going on. We were on our way to a dinner party nearby.

The demonstrators, many of whom were masked, were shouting, “Trans rights are human rights!” again and again, as if repetition (which Napoleon thought the only really effective rhetorical technique) were a guarantee of truth. Apparently, they were protesting the presence of Helen Joyce, who was talking at a meeting in the Centre. She has written a best-selling book against the current transgender orthodoxies. It so happened that she was also a guest at the dinner, and told me that, but for the police presence, she would have felt in danger of physical assault.

Anyhow, as my wife and I walked past the protesters as if we had hardly noticed them, somebody called out “Fascist!” I looked round to see who it might be, but saw no one, and then realized that the person referred to was me. There was no one else to whom it could have referred since, apart from the demonstrators and us, the street was empty.

“It is curious that so many of those who claim to oppose fascism these days resemble fascists both in their manner and their dress.”

Me a fascist! When I look in the glass, I do not see a hard and vicious person looking back, though admittedly I wish I could see someone better-looking. What was so obviously fascist about me as I walked past the Centre with my wife?

Then I realized: I was wearing a tweed jacket and a woolen tie to match. This very threatening costume was what caused the demonstrator to call me a fascist. I suppose the reasoning went something like this: Fascism is a movement of the petty bourgeois, the way I was dressed was petty bourgeois (a teacher, perhaps), therefore I was a fascist. I did not stay to point out the logical error of this.

At any rate, it is curious that so many of those who claim to oppose fascism these days resemble fascists both in their manner and their dress. Black is their favorite color, and they shout to drown out the sound of all voices other than their own. In addition to repetition, their rhetorical method is intimidation. Often, it works.

Helen Joyce spoke again at Caius College, Cambridge, and by all accounts had to turn the public address system up to full volume because about a hundred demonstrators outside—again, many of them masked—made so much noise. The speaker had been invited to the college by Professor Arif Ahmed, a philosopher, who said that people who found her views so offensive that they could not bear to listen to them were welcome not to attend. He also pointed out that the aim of the invitation was to discuss and debate her views, not to promote them. Some students who wanted to attend the talk reportedly had to be sneaked into it surreptitiously, so afraid of social ostracism by their peers were they if they were seen to be attending.

The Master of the College, an academic lawyer called Pippa Rogerson, emailed all the students of the college, calling Helen Joyce’s views “offensive, insulting, and hateful to members of our community,” adding that “we will continue to strive to make Caius an inclusive, diverse and welcoming home for our students, staff and fellows.” It seems that her notion of diversity and hospitality in a university does not include diversity of opinion and the welcoming of discussion, though to be strictly fair to her she did not seek actually to forbid or cancel the talk. Nevertheless, one has the distinct impression that if ever there were an Occupation such as that suffered by France during the Second World War, she would be the first to join the ranks of the Collaborators. In fact, she can hardly wait to do so.

Far worse, however, was what a professor of sociology, Professor Manali Desai, wrote to students: “We are very sorry for the distress caused to you by the circulation of an email promoting the Helen Joyce event. We have looked at our processes and realised we need an authorisation route for circulation of events to ensure that administrative staff do not inadvertently promote potentially harmful material, as happened in this case.”

This passage is worthy of commentary. In the first place, anyone who can write like this has no business to be teaching in a university. In the second, it is deeply insulting to students, who are assumed by the writer to be so mentally fragile that they need protection from distress caused by the mere prospect of a discussion that they are not even obliged to attend. Disrespect of students could hardly go further. In the third place, it is assumed that informing students of an event is the same as promoting it, as if all events were but political rallies for the views expressed in those events. This displays a profoundly fascistic, or at least totalitarian, view of intellectual life. In the fourth place, the phrase we need an authorisation route could scarcely be more sinister, for authorisation implies an authority or authoriser, the we being persons of like mind who would forbid alternative viewpoints, the we inevitably tending to the I, as Napoleon once assumed authority in France from the Directorate.

What is most alarming about all this is that a very noisy but tiny minority has been able with surprising ease to overturn, and indeed reverse, a tradition of free speech and enquiry. Our society has proved surprisingly susceptible or vulnerable to the activism of monomaniacs of many kinds. The problem is that an issue is all in all to the monomaniacs, but to the rest of us it is merely one thing among many others, not even, or far from, the most important.

If I may be allowed a small personal reflection, I think I must have been doing something wrong all these years, for I have never as yet fallen prey to the monomaniacs. I have given quite a number of talks in my life, but never, except once, have I been received by a mob. And on that one occasion, it was not I that they were objecting to, but the following speaker.