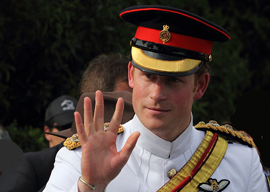 One of Britain’s royal princes has revealed to tens of millions of his closest and dearest friends and acquaintances, via an interview in a newspaper, that he found the period after the death of his mother difficult. He was widely praised for his openness when, of course, he should have been firmly reprehended for his emotional incontinence and exhibitionism. Alas, this kind of psychological kitsch is fashionable, with all kinds of princely personages”footballers, rock stars, actors, actresses, and the like”displaying their inner turmoil, much of which, unlike the actual prince’s, is self-inflicted. They parade that turmoil as beggars in some countries display their amputated stumps.

Perhaps this is to head off the envy that otherwise might attach to them. See, they seem to be saying, “We too suffer, despite our wealth, privilege, and fairy-tale lives, which you falsely imagine to be enviable and without blemish.” At the same time, we turn sufferers and victims into heroes merely on account of their suffering or victimization, so that those celebrities who confess to misery, drug addiction, alcoholism, etc. are even more to be adulated than they already were.

One might have thought that people did not need to be told that children who lose their mothers early in life quite often have difficulties getting over it. The British prime minister, Mrs. May, immediately spotted an opportunity to demonstrate to her sentimental electorate (just ahead of the election she was soon to announce) how much she cared for even the least of them by announcing, in the wake of the prince’s banal revelations, that she wanted to put a mental health professional in every secondary school so that the little ones should experience distress no more.

The cultural triumph of psychobabble, that type of psychologese that allows people to talk endlessly about themselves without revealing anything of their inner life, and certainly without the painful necessity of true self-examination, is thus now complete. There will be a new social contract: I will listen to your shallow clichÃ©s about yourself if you will listen to mine.

Mrs. May’s compassion by proxy, at taxpayers” expense, is typical of the behavior of modern politicians, who need to show their electorates that they are not the heartless or ruthless ambitious nonentities that they might otherwise appear to be, but are ordinary kind people with generous feelings. An uncritically sentimental population is therefore a perfect flock to be fleeced in this way, sheep for the shearing. The prince unwittingly played assistant to the shearer by his tasteless and unnecessary confessions.

Mrs. May’s idea, if it deserves that august appellation, is also typical of the process of simultaneous work creation and work avoidance that marks the modern state, or at least the modern British state, a process that turns it into a kind of trough from which many may feed.

Anyone who has had dealings with the so-called mental health services in Britain, whatever they may be like in other countries (and the very notion of mental health is doubtful reality), knows that they are, as currently organized, frequently cruel and stupid, simultaneously neglecting the raving mad while concentrating their desultory and ineffective efforts upon the voluntarily inadequate. They are so arranged that patients rarely see the same mental health worker, so-called, twice in succession; and anyone who has examined the records of such patients (as I have done) knows that they consist largely of forms filled out by people who believe that form-filling is the work they are paid to do.

The reason they concentrate their efforts on the voluntarily inadequate rather than the lunatics is that the former are relatively docile and predictable, while the latter may be hostile and in the modern world both drug-taking and machete-wielding. They are difficult and sometimes dangerous to deal with, and therefore best avoided, especially by mental health workers, who can rely on the police to deal with them when they become so disturbed that they can be ignored and left to their own devices no longer. Having closed down all psychiatric hospitals, we have had to build what are in effect psychiatric prisons to which patients are dragged by the police. Meanwhile, the form-filling, by ever-larger numbers of functionaries, continues undisturbed as a kind of displacement activity, in the way that mice wash their paws when confronted with a cat. They are thereby treating not their patients but their own anxieties, at the same time receiving a salary every month.

All this is a perfect model for government as a whole, which pursues policies that cause problems that then call for further policies to correct them.