Public-Relations Advice for the Catholic Church 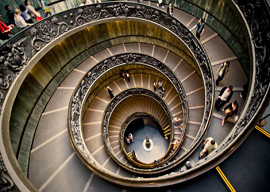 It seemed that only minutes after the College of Cardinals selected Pope Francis as their new pontiff, the popular press was accusing him of enabling the torture of Jesuit priests in Argentina’s “Dirty War“ and nailing him to a cross for refusing to abandon the Church’s 2,000-year-old definition of marriage.

When his predecessor Pope Benedict was appointed, the dutiful cyber-monks of the Universal Church of Cultural Marxism sunk their teeth in his vestments and focused almost solely on his brief membership in Hitler Youth during WWII. Little mention was made of the fact that a prominent rabbi stated that during WWII, Pope Pius saved more Jews from the Holocaust than Oskar Schindler.

Hot on the heels of Benedict’s resignation last month, the Italian press was replete with allegations that he didn”t resign due to failing health as he”d stated; instead, they claimed he”d been blackmailed by a nearly 300-page red dossier allegedly detailing that a “Gay Mafia“ controlled much of the Church’s upper hierarchy.

“Maybe it’s time for the Catholic Church to cease turning the other cheek and to come out swinging instead.”

The press has not been kind to the Catholic Church for the last decade or two. By and large, they”ve recast the Church in the public consciousness as a supra-national entity whose evil tentacles exist solely to enable elderly men to diddle teenage boys. The coverage has been so relentlessly one-sided, one might fairly suspect that journalistic objectivity isn”t nearly as important to many writers as is to crush an ancient institution that stands in the way of the neo-dictators of modern public morality.

Clearly, the Catholic Church is losing the public-relations war in a catastrophic and borderline-suicidal manner. Whereas it’s considered bigoted to criticize Judaism and Islam, it’s open season on the Catholic Church. Placed eternally on the defensive, it has become the religious equivalent of the role that white males play in the culture wars”a target. If the Church doesn’t wish to continue losing, it may be wise to consider a different game plan. It needs to quit apologizing and instead launch a counteroffensive”a second Counter-Reformation, if you will.

Most devastating to the Church has been its sloppy and inept handling of sexual-abuse charges against its priesthood. At first it tended to treat all such allegations with the sort of impenitent blanket denial that is a hallmark of guilty criminal suspects. When that tack left the Church with a black eye and an ongoing PR nightmare, it switched strategies and began caving in to an escalating number of accusations with what appeared to be hush money for any and every accuser. This suggested weakness, which only made the sharks smell blood and continue attacking.

Whenever one starts with a blanket assumption of one group’s innocence and another group’s guilt, this invites certain psychopathic personalities who belong in the “innocent” group to make false accusations. This is especially true when the “guilty” group has deep pockets. Slowly”very slowly”many people are becoming aware that sometimes women falsely accuse men of rape and that ethnic minorities sometimes falsely accuse whites of hate crimes. In the reams of press coverage regarding priestly sex offenders, how often have you heard of false accusations? Even once?