Puerto Rico: All Banana, No Republic 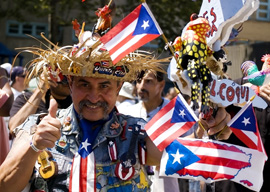 Puerto Rico is being allowed to fall apart in order to rig American presidential elections by tipping Florida’s electoral votes to the Democrats. The looting of Puerto Rico’s institutions by the rich and the poor alike is depopulating the island.

Puerto Rico is a fascinating test case for what has emerged as the central issue of 2016 politics: borders.

The two American presidential candidates in 2016 both seem fairly centrist in terms of traditional left-right positions, but Mrs. Clinton ranks with John McCain as the purest example of current invade-the-world-invite-the-world establishment ideology. In contrast, as Hillary fumed last week, Donald Trump has fueled his surprise run by endorsing the “alternative” worldview that finds borders prudent and valuable.

For example, Jean-Claude Juncker, the EU politician who heads the European Commission, enunciated this month the ascendant dogma: “Borders are the worst invention ever made by politicians.”

Expressions of open-borders extremism such as this are becoming ever more explicit and common, but way back on Sept. 10, 2001, Mrs. Clinton’s husband affirmed “the ultimate wisdom of a borderless world“ and called for “open borders to all.”

Although The Wall Street Journal first called for the constitutional amendment “There shall be open borders” in 1984, the world’s elites have typically been more enthusiastic about denouncing commoners for doubting their dream of borderlessness than in empirically testing their idea.

Puerto Rico, therefore, is useful to study as a test of the effects of antinationalism because it is a third-world nation with its own Olympic team, yet it enjoys open borders with the United States.

“In short, what the Puerto Rican nation needs is nationalism.”

It’s increasingly turned out to be an expensive scam. Puerto Rico has run up $110 billion in debt and unfunded pension liabilities.

But open borders have also been a catastrophe for Puerto Ricans, who have been abandoning their native land in droves.

In the West Side Story song “America,” Rita Moreno snidely described life in Puerto Rico as:

But Puerto Rico’s population has been collapsing in recent years. The Wall Street Journal reported two months ago:

Puerto Rico has suffered a population slide that is steeper and more financially disastrous than in any U.S. state since the end of World War II.

In 2014 alone, a net of 1.8 percent of Puerto Rico’s population left for the mainland. The cumulative decline from its peak population in 2004 is now approaching 10 percent.

About three-fifths of all Puerto Ricans now live on the mainland.

That’s an important fraction to be aware of because we are often told that only a small percentage of the 6.1 billion people who live in the less developed nations would bother to decamp for the first world under a policy of open borders. But the experience of Puerto Rico, which is hardly poor (GPD per capita is near triple the world average), suggests that if allowed, third worlders would keep coming until life in America and Europe declines to third-world conditions.

Puerto Rico’s slow depopulation due to corruption and ineptitude is particularly interesting for what it shows us about how the establishment’s invade/invite philosophy undermines civic responsibility and moral accountability. While nationalism encourages stewardship, globalism licenses Puerto Rican-style exploitation and shoddiness.

Benjamin Franklin famously replied to a lady inquiring what the framers of the Constitution had come up with: “A republic, if you can keep it.”

But Puerto Rico is a by-product of America’s first spasm of imperialism, the Spanish-American War of 1898. While the urbane Cubans were quickly granted some degree of independence, the impoverished, agricultural Puerto Ricans seemed too backward for self-rule.

Moreover, master strategist Alfred Thayer Mahan argued that the U.S. Navy needed a coaling station in the Caribbean to protect the approaches to the future Isthmian Canal from the battle cruisers of the Queen and Kaiser, just as the British colony of Malta guarded the Suez Canal.

When Puerto Ricans flooded into New York City after World War II, helping wreck the South Bronx, the U.S. implemented a Trump-like industrial policy to subsidize manufacturing jobs in Puerto Rico. This slowed immigration to the U.S. for several decades. But when a major tax break expired in 2006, the local economy immediately collapsed and the mass exodus began again.

Besides the weak economy, crooked institutions plague this island nation that’s not allowed to be a nation-state. It’s a banana republic without even nominally ever having been a republic.

There’s little point in being a Puerto Rican patriot and working to make Puerto Rico a better place because all the money is in conning Uncle Sam. Electoral politics within Puerto Rico are subservient to the issue of the relationship to the imperial power: Should Puerto Rico stay a commonwealth or become a state? (Only a few patriots call for independence from the Washington cash cow.) Few politicians are interested in local issues of good government.

Puerto Rico in the 21st century demonstrates the moral debilitation caused by a lack of nationalism. Puerto Rico’s institutions have become thoroughly corrupt.

Between 2005 and 2010, more than 1,700 Puerto Rico police officers were arrested for crimes including murder, assault, theft, domestic violence, and drug trafficking. That’s roughly 10 percent of the 17,000-person force and nearly three times the number of New York City police officers arrested in a comparable five-year period. The NYPD is about twice the size of the PRPD.

If you are an American criminal on the lam, though, Puerto Rico is a good place to hole up from the law. For instance, one of the more lurid recent murders in my neighborhood was the 2009 Armenian-versus-Armenian killing in the parking lot of the local Sears in North Hollywood, Calif. By analyzing social media, the victim’s father tracked the affluent killer down to a beach town in Puerto Rico and federal marshals arrested him. But to the outrage of the LAPD, a Puerto Rican judge let the killer out on $50,000 bail, and he immediately disappeared.