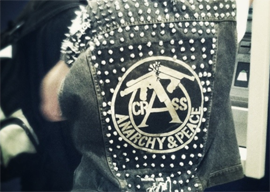 I grew up playing in hardcore punk bands and fighting skinheads, and the political mantra for that scene was “Anarchy and Peace.” It seems incredibly naÃ¯ve in retrospect, but being into punk rock was actually great training for becoming a rational, libertarian, paleoconservative adult. Here are 10 reasons why:

1. IF YOU”RE NOT AN ANARCHIST WHEN YOU”RE YOUNG, YOU HAVE NO HEART; IF YOU”RE NOT A LIBERTARIAN WHEN YOU”RE OLD, YOU HAVE NO BRAIN
The anarcho-punk movement scoffed at the whole duopoly of right and left. We realized at a very young age that the whole idea of a political spectrum is a trick to get you to participate in their dippy game. We didn’t want anything to do with any government institution, including cops. If skinheads beat up one of us, we”d round up a posse and go get them (and often get beaten up again, but that wasn’t the point). In contrast, today’s kids ask the government for everything from paying their student loans to finding them more black friends.

2. YOU HAVE INTIMATE KNOWLEDGE OF WHAT DRUGS CAN DO
Conservatives sound painfully square when they talk about drugs. They seem to think pot is the same as acid is the same as heroin. That’s like saying getting a blowjob is the same as having your mind blown is the same as blowing your head off. After a prolonged and decadent adolescence, I can focus all my hatred of drugs where it matters”on heroin. Pot is a silly distraction that’s about as dangerous as bourbon. LSD gave me the ability to think light years outside the box and to this day, whenever I get hiccups I simply tell my brain, “I don”t want these anymore” and it makes them stop. But heroin is a whispering devil that hides your fear of death under a blanket while it smothers you to death with a soft pillow. Losing a dozen or so friends to it wasn”t a blast, but I can speak with authority about which drugs are bad and why.

3. A D.I.Y. YOUTH LEADS TO AN ENTREPRENEURIAL ADULTHOOD
The term “Do It Yourself” was hardcore punk’s balls-out code of honor. If you wanted a band to come to your town, you”d write them a letter, agree on a portion of the door, and plaster the city with flyers. It didn”t matter if you were only a teenager. You made it happen no matter what. At 17 I got a call from some bureaucrat at the public transit authority who said they were prosecuting me for vandalism because my show’s flyer was pasted to a bus-stop shelter. I knew they had no proof it was me so instead of confessing, I explained that the bands on the flyer have many devout followers and it must have been one of them. This is a great lesson for a future entrepreneur.

4. DRESSING LIKE A GOOF LEADS TO NOT DRESSING LIKE AN ASSHOLE
Punk and hardcore were totally against fascism except when it came to getting dressed. Your laces had to be perfectly parallel on your 14-hole Dr. Martens (no other brand allowed). Your pants had to be hemmed short, not rolled up, and decorating your leather jacket took about a month of gut-wrenching arts and crafts. It’s gauche to dress punk as an old man, but you will never catch an ex-punk wearing pajamas at the airport or baring his toes in a bar. Our suits are tailored, our pants fit perfectly, and after the age of 30, our T-shirts don”t say a damn thing.

6. SLAM DANCING TEACHES CAMARADERIE
Before it was called moshing it was called slam dancing, and the most important rule was: If anyone falls, you have to lean down and scoop him up. Preventing your buddy from getting trampled builds character and leads to adults who would never consider throwing anyone under the bus.