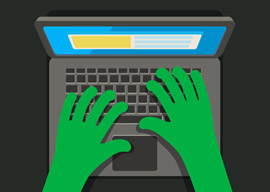 In a normal election year, it would be big news: one of the largest and most influential newspapers in the U.S. fooled by a small cadre of internet trolls into publishing a completely false piece about a GOP presidential candidate. In a normal election year, a story like that would dominate the conservative news cycle for several days at least. Raging Glenn Beck types would demand that the editors explain the reason for the complete abandonment of journalistic ethics that led to the massive error, and there would probably be calls for the reporter responsible for the piece to be fired.

Hell, in a normal election year, a story like that might even seep into the mainstream news cycle, with “media critics” wailing like BjÃ¶rk over the decline of newsroom standards and practices.

But this isn”t a normal election year, as if anyone needs me to point that out.

Last week, as the Republican National Convention raged on in Cleveland, The Washington Post decided to run a damning hit piece against Donald Trump. What else is new, right? But the Post had an ace up its sleeve, a scoop, if you will. I”ll let the title speak for itself:

As repugnant as Trump Twitter can get, Trump Reddit looks far worse. That’s according to an investigation we carried out here at Intersect [a WaPo blog] over the past few days, which found that the moderators of some of Trump’s Reddit fan clubs rub elbows with neo-Nazis and white supremacists, among others.

The largest Trump group on Reddit, with 276,000 subscribers, is r/DonaldTrump2016. One of the moderators of that group also oversees r/Quranimals, which self-identifies as an anti-Muslim “hate sub,” and r/Rapefugees, which is virulently anti-migration. Other mods of the group are involved with r/eugenics and r/betauprising (which advocates for a society in which women cannot “choose with whom they want to have sex.”)

Now, that’s some good scooping there, old-school! The article went on to expose a complex web of nastiness involving the moderators of DonaldTrump2016 and the other “racist, homophobic, and anti-Semitic” Reddit groups they oversee. Let’s just say, the reporter really put in the hours on this one. Paycheck well earned.

“Let’s have the Trump campaign do everything the wrong way, and let’s see what happens.”

Speaking of that, who is this intrepid sleuth wearing the fedora with an index card saying “press” neatly tucked into the fabric band? Why, it’s none other than ace millennial newshound Caitlin Dewey. Dewey is The Washington Post‘s “digital culture critic.” She earned her bones as a star reporter through years of hard work”tiring nights walking a beat, pursuing leads that often went cold, uncovering graft and corruption at the highest levels of society. Just kidding; she won an essay contest sponsored by The New York Times in which college students were asked to describe their last breakup.

Don”t laugh; Michelangelo only got the Sistine Chapel gig because he answered a matchbook ad asking, “Can you draw this pirate?”

Dewey (who refused my repeated requests for comment) has been on the conservative radar before. A year ago, Daniel Greenfield wrote, “The center of Social Justice Warrior memes on Facebook though is Caitlin Dewey’s blog, which gets high traffic for essentially taking some SJW meme and building a “Why that matters” or “Explained” headline around it. But the Caitlin Dewey problem is really about the Washington Post’s willingness to run any BuzzFeed style garbage in the hopes of getting traffic.” Greenfield added that although Dewey is listed by the Post as an “opinion writer,” in reality she’s one of several “former interns who run blogs trying to produce viral BuzzFeed, Salon, Upworthy material by scouring Reddit and other sites. There’s a large ecology of young journalism majors doing the same thing, but the Washington Post isn”t fooling anyone when it calls them opinion writers.”

Obviously, Greenfield was just jealous, and surely Dewey’s exposÃ© of the DonaldTrump2016 Reddit group proved to the world that she’s as much of a Murrow as Murrow ever was.

Well, except for the fact that the millennial moron got punked.

The DonaldTrump2016 Reddit page is a hoax perpetrated by trolls, one of whom is a friend of mine. In fact, I wrote about him in this very column last October. “EugeneNix” (say it fast) is my favorite internet troll”a true hero, in my estimation, because his targets are media leftists and smug “social justice warriors” (he was one of the Reddit trolls who helped usher Ellen “Safe Space” Pao out the door last year). Also, he despises millennials even though he is one, so he gets a pass in my book despite his youth.

The Post caught the error after Dewey’s piece was posted. The editors caught it because the moderators of the real “largest Donald Trump Reddit page” complained, vocally. The Post‘s response, however, was not to pull the piece, which would have been the ethical thing to do, but instead to subtly change the headline (“The people running Reddit’s largest Trump club also promote eugenics and call Muslims “animals”” became “The people running this Trump fan club also promote eugenics and call Muslims “animals””). A brief correction was also added. However, the correction merely stated that the Post had erred by calling DonaldTrump2016 “the largest Trump group on Reddit.” There was no mention of the fact that Dewey had been taken in by a fake Trump page run by hoaxers. To the reader, the mistake appeared innocent and benign”the Post simply got the size of the group wrong. A mere numbers error, a miscount, as opposed to a complete lack of diligence, integrity, ethics, and, frankly, intelligence on the part of the Post‘s digital culture critic.

I mean, Caitlin Dewey is an idiot. If that sounds rather harsh, I”ll point out that it’s what she wrote about herself in a tweet following the revelation of the hoax (“I”m an idiot”). And while she showed a tad more integrity than her editors by admitting her intellectual deficiencies and deleting (rather than rewriting) her tweet about the inaccurate piece, that still doesn”t change the fact that this lightweight doesn”t belong at any major newspaper, left, right, or center.

The moderators of the real “largest Trump group on Reddit” issued a statement, which can be read here.

EugeneNix explained to me how the mods were able to artificially make DonaldTrump2016 look bigger and more important than it was: “It’s a simple trick through CSS. CSS is basically how you design websites, including Reddit. Using Reddit’s CSS customization, our resident CSS guy, /u/ZeStumpinator, decided to be cute and add code with additional zeros after the subscriber and viewer counts, making it look as if the subreddit had 1000 times more traffic. I think anybody with a brain cell in their head would”ve figured it out as it’s fairly obvious to anybody who has ever used Reddit.”

In fact, the idea with DonaldTrump2016 was to make it look totally on-the-level, knowing that the moderators” histories would be a tantalizing draw for the “legit” press: “The subreddit is moderated seriously, but part of it being a troll is that people look at the moderators’ history pages, see we run offensive subreddits, then complain loudly about it as if we are the devil, which is what happened with this hilarious WaPo article.” The devil indeed. Nix’s trolling has even irritated those in the pro-Trump camp. On July 27th, Breitbart finally ran a piece about the Post’s error, and author Allum Bokhari blatantly withheld any mention of DonaldTrump2016 in the article’s text. By erasing Nix’s subreddit from the story, Bokhari essentially parrots the Post’s claim that the incident was a mere numbers mistake, rather than a case of a major newspaper falling for a hoax.

I asked “Nix” why his trolling attempts are always so successful:

There are a lot of piss-poor trolls that have no tact or persuasion skills. They think that by loudly yelling CUCK or NIGGER, they”re making profound statements and they”re philosophers of sorts. There is a time and a place to say nigger, cuck, and kike. And that time is not every time you want to say something. Good trolls can get things done and move people’s attention to where it needs to be. Donald Trump is himself a troll in this regard, and a damn good one. He’s done more to discredit the media than what should be humanly possible. It’s lovely. Not that I fully trust him, though. But I think his ego requires him to be a damn good president, after all, he’s made his last name his motto in life. We live in interesting times and many good trolls are helping reveal the left-wing biases of Silicon Valley, and the mainstream media. There is ALWAYS a role for good trolls. Outthinking our enemies and making them act or go crazy is ALWAYS going to be useful.

Well said, my friend. Stay on the side of the (fallen) angels.