Put the Grandkids in Charge 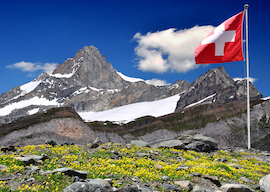 As everyone knows, the definition of serendipity is searching for a needle in a haystack, and instead finding a farmer’s daughter. Not so fast, as they say. I live among farmers and haystacks up here in the Alps, and I’ve yet to run into a farmer’s daughter who is worth the buckshot in the bottom. I was thinking of such matters all last week while skiing with my son and his two children, and how happy I feel now, surrounded by wife and children and grandchildren, something I’ve avoided throughout my life while chasing daughters.

Incidentally, the little turd Taki, who just turned 13, is such a good skier, the “race of the generations” was called off. He’s just too fast and I’m just too old and too slow. My son J.T. took pity and announced the race will take place sometime in the future. The higher virtue of pity prevailed over the sin of pride. Yet I found delight in watching the most ordinary and most basic of occurrences: grandchildren schussing down mountains (I really am getting old). I also found an old book by Andrea von Stumm, Free Lies, 4, published by the ex-chairman of The Spectator, which brought back so many memories I called the author and reminisced like mad.

Yep, it’s a funny old world, with youngsters now throwing off constraints and living the life of maximum self-expression, or so they believe while making fools of themselves. Constraints are good, and I was reminded of them when a bunch of old British friends arrived in Rougemont, the village next to this “shithole,” and presented me with a baseball cap with a “Make Gstaad Great Again” logo on it. They’re all Brexiteers but did not go overboard in describing the situation. They did not insist on walls and wars, just independence from foreign rule. Good old British understatement and all that.

“What was that about ‘from the mouths of babes’?”

The reason I call this beautiful village a shithole is because it’s losing its traditions. Traditions are beliefs in certain values, values no longer respected in the West. Money is the Genghis Khan that’s done us in. Statues are being torn down in America to satisfy race hustlers, and the R-word is now a precious commodity to be used in destroying anyone who is not in agreement. The Western media is almost totally left-wing and sees an opportunity to wipe out conservatives and traditionalists. Feminist outrage has propelled some extremely useless females to run for president in the good old US of A, so if you think Trump’s trouble, wait until Kamala or some other know-nothing takes over.

Let’s face it, there is no cultural integration of Europe with Africa—but if one says it, he or she is a racist. Here in this region a few poor Africans were taken in, and I occasionally see them all walking sullenly, always together, waiting for the next free meal. I feel as sorry for them as I’m certain they feel contempt for me, but the truth is they’d be much better off back home, wherever that may be. The smearers and manipulators in the media can smirk all they want, but my 13-year-old grandson posed a question none of the Fourth Estate gang would ever dare pose. We were discussing places that Trump has called shitholes and how un-PC it was to say such things. “But how will they know how bad their lives are if we don’t tell them? They might think it’s normal to be hungry and sick.”

What was that about “from the mouths of babes”? The epidemic of stabbings and gang violence in Britain largely affects black youths, but until Trevor Phillips, a black man, came out with it, our politicians and commentators were too chicken to say it. Everyone else knew it and we talked about it, but the media and political class stayed shtum. Ditto when British Pakistani Muslims targeted young white girls, and the fuzz, politicians, and the BBC pretended not to know in order not to give offense to Muslims. Give me an honest authoritarian government over a weak PC one any day. The left recognizes this, hence the attacks on Hungary and Poland from people who should be cleaning restrooms, not offering opinions and getting paid for it.

Traditional democracy worked perfectly in countries whose people were basically the same: white and Christian. Africa and the Middle East have never worked because they consist of tribes with flags. You will not find anyone writing this or saying this in public. Yet it’s the truth. The culture wars at present that threaten our immigration system have emboldened the left like nothing else. The R-word is their pile driver, and heaven help anyone who dares oppose them. But I shit on them because basically they’re liars and phonies. And now back to tradition, and the shellacking it’s taking.

In America, traditions came from the Christian religion and the British heritage. No longer. Hollywood, the media, and immigration have taken care of that once and for all. Ironically, the Swiss, who are very traditional people, have allowed rich foreigners to turn once-sleepy villages like Gstaad into glitzy ghettos for Gulf and Far East crooks. So what happens? Easy: Old, rich, and educated people like myself (sorry about that) have put up the barriers of our chalets and circles and see only each other. Ditto for the poorly educated, far richer, and extremely vulgar new arrivals. The latter will one day soon outnumber us and prevail. As Gstaad goes, so does Europe. You read it here first.