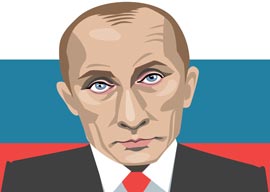 Should I be found dead with a polonium-tipped suppository lodged in my backside, the finger of suspicion will point firmly at the Kremlin. For sure, its parade of goons and assassins has proved on occasion bungling and inept”witness their special forces at Beslan, their gassing with opioids of civilians during the Moscow theater siege, and the trail of radioactivity left by the murderers of Alexander Litvinenko”but Russian ham-fistedness and lack of judgment do not render the country any less dangerous. For the sake of national pride and personal ego, Putin is dragging his fiefdom back to the dark ages. Expect a chill and threatening future.

I have always believed in standing up to bullies and tyrants. As a teenager and at the height of the Cold War, I was photographed in central Moscow flipping the bird to the statue of the infamous Cheka secret policeman Felix Dzerzhinsky. Gesture politics, maybe, but it made me feel better; cousins of mine had spent time in the Lubyanka.

Yet that photo is a reminder of how little ever changes, how nations revert to type, how quickly we forget the past and let wishful thinking override reality. Once again, Russia is saber-rattling and invading its neighbors; once more, its long-range bomber fleet is mounting scare missions around the globe. A paranoid and defensive Kremlin is ever likely to lash out.

“Putin understands the Russian psyche and knows how to exploit it. He recognizes that the average citizen is essentially a tractor mated with a potato, and order and stability are the key prerequisites.”

The country remains what it ever has been: a third world state with oil and nukes and a lot of resentment. Gangsterdom reigns. To do business there, you must climb into bed either with the politicians or the mafiya, and relying on protection won”t prevent you being screwed or feeling violated. My twin brother previously had dealings in Moscow and once or twice had meetings with a strange and unappealing government minister named Vladimir Putin. “Everyone sniggered that he had a voice like a woman,” my brother recounts. Perhaps they are not so ready with the laughter now. Incidentally, the charming right-hand man of my sibling ended with several hollow-point rounds in his head. Sad how things turn out.

I have my doubts that Russia will emerge blinking back into the light to rejoin the world community. A cave can be a comforting place for the controlling. The West never liked us anyway, Putin will tell his people: you are better off here with me. Russians like to be whipped and tyrannized by their masters”it is in their folklore and DNA”and Putin does just that. So the ruble drops, investment fades, foreign reserves run dry; so domestic inflation rises and the stores run out of goods. It is a scenario that plays into the hands of the Russian leader, a self-fulfilling prophecy that the world is against Russia and a strong hand will save the day. Each year, Stalin takes another step toward rehabilitation. Here we go again.

Unless it is caviar or gas, one should never buy a Russian product. Be honest, a Russian automobile or refrigerator is hardly a must-have. It is no coincidence that Russian fighter aircraft have among the best ejector seats”called Zvezda (lightning)”in the world: chiefly because the jet engines are so shoddy and liable to fail. Russia is feudal and rusting; it doesn”t matter how many times it crawls up from the corrupt and inefficient pit it has dug.

Putin understands the Russian psyche and knows how to exploit it. He recognizes that the average citizen is essentially a tractor mated with a potato, and order and stability are the key prerequisites. Forget the niceties. Few Russians care if the odd journalist is shot or if a lawyer gets beaten to death in jail. Life can be nasty, brutish, and short: it certainly is in Russia. Check the life expectancy statistics. There is a grim fatalism in the Russian character and a certain inevitability to where the nation is heading. Where once Ivan the Terrible sent out his mounted enforcers with human skulls dangling from their saddles, Vladimir Putin sends out his hit men to do his bidding.

That man has issues. Bare-chested and riding a horse, wrestling a bear, the martial arts poses, the chaperoning of migrating geese from a microlight: perhaps if he just came out of the closet, he would spare himself a great deal of angst and the rest of the world a headache.