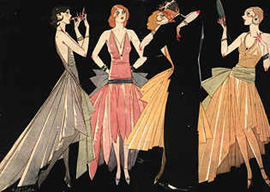 GSTAAD—“Mick Flick Invites you to the Roaring Twenties,” read the black-and-white invitation card. A flapper and a Rudolph Valentino type in white tie and tails flirted in the old-fashioned manner—she dreamlike, fluttering her eyes upward, he looking swarthy and passionate while standing over her. In the background, a roomful of swells tripped the light fantastic.

It is rare for a party to live up to expectations, especially one which people travel long distances to attend. I’ve given a few in my life and none of them has ever truly clicked. Mainly it has to do with preparation. I haven’t got the patience, but Mick is a German Mercedes-Benz heir who’s very thorough.

It was a sublime pleasure walking into the great room of the Palace Hotel, which was decorated into a kind of twenties speakeasy, with nothing to remind me of today’s brutal culture. No oiks, no cheap celebrities, no publicity seekers, no freaks. Everyone was dressed to the nines: the women in flapper dresses, the men in white ties, dinner jackets, and white-striped suits à la Chicago gangsters.

“I can’t think of a better reason to throw a bash than to tempt fate by tripping the light fantastic—arthritis or no arthritis.”

Mick’s ex-wife (and mother of his three children) Maya Schönburg had the brilliant idea to have only tables for two or three or four people, like nightclubs tend to do, and the trick worked. Two great bands played their hearts out, can-can girls danced and ooh-aahd, and 290 of us quick-stepped Gatsby to shame.

One’s guests have always been the main ingredient for a successful party. In this case, half of them were in their twenties, the age of Mick’s children. Alexander Flick is a talented documentary maker while his younger brother Moritz works for the best and only responsible newspaper in Israel—Haaretz. No hedgies they. I sat with old friend Peter Livanos, Donatella Flick, and Kirsty Bertarelli, the young and beautiful English wife of Switzerland’s richest man and past America’s Cup winner. The partying had begun on a tiny alpine hut the day before during lunch. I had a full chalet and something like fourteen people staying, all of them young except for my close buddies Leopold and Debbie Bismarck. With them and the mother of my children we went skiing early Friday but spent most of the afternoon in the sun, downing pure Swiss wine.

By the time we got down I was thoroughly crocked and stayed that way during dinner with more German friends, Heinrich and Milana Fürstenberg. Then it was up to the palace, which was straight out of Grand Hotel, listening to refined German accents with lots of blonde young women running around pursued by the ridiculous likes of me.