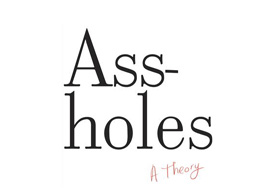 It’s been three months: time for another potpourri of unrelated items.

Assholes. To make up for not reading half as many books as I’d like to, I read about books. An excellent resource is the London Literary Review, of which I remain a faithful subscriber notwithstanding the fact that the bastards haven’t sent me a book to review FOR 22 YEARS.

In the February issue they review a book with the arresting title Assholes: A Theory by philosophy professor Aaron James. From the review, which is by Michael Bywater:

James fingers, among others, Donald Trump, Silvio Berlusconi, Simon Cowell and Mel Gibson. He claims, plausibly, that George W. Bush wasn’t an asshole, but was in thrall to a lot of them, most notably the asshole’s asshole, Donald “Asshole” Rumsfeld….We live under what he terms asshole capitalism: a proposition with which few would argue.

I certainly wouldn’t argue with it, though I would argue with the choice of verb in the first sentence there.

Parsifal at the Met. If you think business and politics are plagued with assholes, check out high culture. Paul Johnson covered some of this ground in Intellectuals, showing us what intolerable assholes Shelley, Tolstoy, Hemingway, et al. were. Johnson’s 416 pages are barely enough to cover just the literary side of the field, though. Picasso was an artistic asshole, Sir Isaac Newton a mathematical one. And then there was Richard Wagner, who discovered and explored entire new continents of assholery.

“Human events are smarter than human beings and will catch us out eventually.”

Wagner’s on my mind because I went to see Parsifal on Saturday at the New York Met. The orchestra and singers were superb, but the director should be run out of town on a rail. His sets were minimalist”bare soil and rock. This makes nonsense of the libretto (“Here in holy forests,” Act One) and the stage directions (“Tropical vegetation; most luxuriant wealth of flowers,” Act Two), all of which were written by Wagner himself. If it’s OK to mess around with Wagner’s stage directions, why isn’t it OK to do the same with the music? Why not have the orchestra play while blindfolded or wearing boxing gloves? Pshaw!

Some nitwit at the Huffington Post calls those sets “thought-provoking.” The thought they provoked in me was that the spectacle would have been more atmospheric if they’d staged the thing in a Walmart parking lot.

Parsifal in 150 words. Most operas have longueurs, but Wagner has more than the average. (“Wagner has great moments but dull quarter hours.” “Rossini.) During those boring stretches I amuse myself by mentally condensing the plot of the thing into a few stanzas of doggerel.

Parsifal concerns the medieval Knights of the Holy Grail and Holy Spear. Here are four and a half hours of opera condensed to less than 150 words. You’re welcome.

Act One
Knights guard Grail, the Spear’s gone missing:
Stolen while the Prince was kissing,
Then used to give him wound that’s cruel,
Which none can heal but virgin fool.