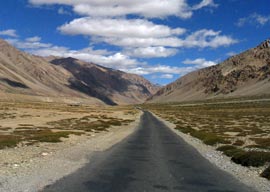 Virtue totalitarianism. For devout Christian bakers, florists, and photographers throughout the U.S.A., the message going out from the news recently has been the one Anouk Aimee received from a helpful stranger she met while crossing the desert in the 1962 movie Sodom and Gomorrah:  “Watch out for Sodomite patrols!”

My impression from these recent events has been that the Dictatorship of Virtue is waxing strong, and that none dares to resist them. Where will it end? See how far things have gone in Britain:

The National Union of Teachers has called for a “positive portrayal of same sex relationships” in lessons to be made “compulsory” under the next government.

Next will come the forcible removal of children from “homophobic” parents, to spare their little minds from being corrupted by “bigotry.”
Couldn”t happen here? Who thought, twenty years ago, that homosexual marriage could happen here?

Was her name Kim? British tabloid headlines are a lifetime study.  The national obsessions have changed somewhat, though. Back in the 1960s David Frost cooked up the perfect headline, pressing all the buttons of the tabloid-reading British public (royals, pets, deviant clergymen): SEX-CHANGE VICAR IN MERCY DASH TO PALACE CORGIS.

“Watching Peter Fonda and Dennis Hopper act out their rebellion against bourgeois conformity, I wanted to put on a suit and tie, light up a Chesterfield, and mix myself a martini.”

Here’s one from the Daily Mail the other day. It rates no better than “trying hard,” and has a rather obvious grammatical fault, but I”m glad to know the old spirit is still alive: NEW HEARTACHE FOR IRAQ WAR HEROINE BATTLING DEADLY DISEASE AFTER BEING BLOWN UP BY A MORTAR BOMB AS FIANCE LEAVES FAMILY HOME.

Moveable feasts. Easter, Passover, and the Qing Ming festival all fell on the same weekend this year. I made a brief attempt to work out how often this happens, but the arithmetic defeated me.  As math textbooks say: I leave it as an exercise for the reader.

There is a curious symmetry in there. The Christian calendar is solar; yet we have this one major festival, Easter, determined by the Moon. Contrariwise, China’s traditional calendar is lunar (like the Jewish calendar); yet they have one major festival determined by the Sun. That’s Qing Ming. Chinese New Year wanders about between our January 21st and February 20th, but Qing Ming is always April 4th or 5th.

What do you do on Qing Ming? Sweep the graves of your ancestors, that’s what, and burn hell money. Alas, the Derb household’s ancestor graves are all far away, but Mrs D went out to the fire pit behind the garage and burned some hell money anyway.

Blast from the past. My lady is still, after 29 years in the U.S.A., filling out her knowledge of the national culture. Old movies, for example: She adds them to our Netflix list based on how many awards or recommendations they got. This gives me a chance to revisit random famous old flicks.

Last week our selection was Easy Rider, which I hadn”t seen since 1969. What a period piece! I”d forgotten how obnoxiously daft the 1960s counterculture was. Watching Peter Fonda and Dennis Hopper act out their rebellion against bourgeois conformity, I wanted to put on a suit and tie, light up a Chesterfield, and mix myself a martini.

Peter Fonda plays his role practically comatose. This was apparently intended to signify some kind of spiritual depth. Hippie nature-worship is right up front, dramatic mountain, river, and forest landscapes alternated with ugly strip mines and factories. The dialog is inane.

Also up front is the demonisation of Southern white men. They were the enemy:  leering, jeering, ugly, violent, and short-haired. To the sensitive, nature-worshipping metropolitan hippies, these were the Other, hated and feared.

I met a few of these Southern good ol” boys in my own travels around the country in the mid-1970s. They seemed amiable enough, friendly and harmless if you minded your manners. The species is well-nigh extinct today; yet still they lurk in the Progressive imagination, the eternal boogie-man of the Left, metastasized nationwide now, disguised as bakers, florists, photographers …