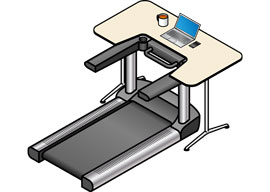 Standing up for work.  So I got a new desk. I”d been reading these news stories about how bad it is for your health to sit all day. The phrase “the sitting disease“ has actually been showing up in headlines. Another news story asked: “Is sitting the new smoking?“

Research has linked sitting too much to increased risks of diabetes and death from cancer, heart disease and stroke.

Hoo-ee. Sitting is what I do all day long. I don”t want to die yet. So what’s the answer?

The answer is a stand-up desk. I was a good consumer and did my research. Yes, sitting all day is bad; but standing all day isn”t great either. What you need is an adjustable desk. You stand for a couple of hours; then you press a button on a wee control panel and mmmmmm, the desk lowers to a preset position. Sit for a while, then hit the control panel and mmmmmm, you”re back at standing height.

I got one of these desks, the best-rated one in my budget range. I have to report mixed results. Sure, it’s healthier to be mostly standing. If you”re not used to it, though, it’s a bitch on your knees and calf muscles. Allow for a period”at my age (the largest even number that can”t be expressed as the sum of two nonprime odd numbers in two or more ways) it’s about a month”of getting used to the darn thing.

And face it: You”re never going to catch the zeitgeist. Just as I was congratulating myself on having caught up with all the bright young kids, I started reading news stories about treadmill desks. I give up.

Who we are.  Here’s my proposal for Civil Service reform: clichÃ© monitors. I”d have one assigned to every department of the federal government, to stand next to cabinet officers when they give speeches and blow a loud whistle for every tedious, grating, threadbare clichÃ© they drop.

DHS Secretary Jeh Johnson, for example, who seems to speak entirely in clichÃ©s. Try this specimen on illegal infiltrators, if you can stomach it: “path to citizenship … out of the shadows … who we are as Americans …” Paging Mr. Arbuthnot.

Better yet, let’s appoint some cabinet officers who don”t have tin ears for the English language.

Alternative history.  Reviewing a book about eugenics for VDARE.com brought home to me again what a colossal influence on our intellectual culture the Nazis were. What would our public conversation on human-nature topics”race, genetics, the Jews”be like if the Nazis had never existed? Way different, for sure.

The alternative-history story premised on Germany having won WWII has of course been worked to death. (My favorite, and I think the earliest: The Sound of His Horn.) I wonder if anyone has done a story based on Hitler & the Nazis getting wiped out by a communist bomb in 1925? If not, someone should.

What blacks are interested in.  Speaking of race and book reviews, I did a review for American Spectator of a book titled What Should We Be Worried About?”Real Scenarios That Keep Scientists Up At Night, edited by John Brockman.

This is just a collection of 153 responses to the 2013 Annual Question, posed to a list of eggheads by techie-intellectual website Edge.org.  The responses covered a wide and interesting range.  You can read them all on the website. The book is just a concession to the dwindling demographic who like print on paper.

In my review I stuck to the main topic. There was no way I could review all 153 responses, so I picked a few to make a theme.

Here’s one I didn”t pick, the response from Dartmouth astronomer Stephon Alexander, who is black. What’s he worried about?

I worry that … there has been little serious discussion about recruiting and promoting persons of color in the academy.

Really? If half the stories I”ve heard about faculty selection panels are true, they discuss little else. I am reliably informed that math departments fight like cats to acquire the tiny numbers of black and Hispanic doctoral recipients produced each year.