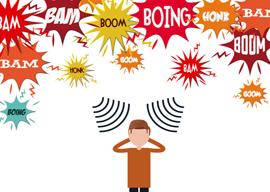 One of the most denied of all human rights is that to silence. I do not mean by this the right to remain silent when accused of a crime, though in Britain at least this has effectively been abolished. I mean, rather, the right not to be assaulted everywhere by extraneous and unnecessary noise.

Silence has become a luxury that very few can afford. An Italian artist was once asked why he had moved from his native country to the wilds of the west of Scotland, not at first sight an exchange that many would make. He replied that while silence in Italy was very expensive, in Scotland—at least in the largely uninhabited parts—it was very cheap.

Of course, not everyone appreciates silence, and perhaps fewer and fewer do so. Indeed, so used have they become to constant electronic stimulation that they grow nervous or anxious without some form of it. Many now claim that they cannot concentrate in silence. Perhaps it is a sign of my age that I am surprised when I see a young person, apparently concentrating on something, with his headphones relaying cacophony while he works. Perhaps, though, he is also working on a homeopathic theory of cacophony that like drives out like, since, if he were to remove his earphones, he would be exposed to other people’s cacophony. Better your own noise than someone else’s.

“Silence has become a luxury that very few can afford.”

When I was young, there were notices outside hospitals: QUIET PLEASE. Now such notices would be completely redundant because the noise within outdoes by far any noise that could enter from outside. No doubt some of this noise is unavoidable, but much of it is not. A friend of mine was recently in hospital—a self-proclaimed “Centre of Excellence,” which almost guarantees its mediocrity and likelihood to neglect—and was unable to sleep not because people were dying all around him and subject to resuscitation, a noisy business, but because the night nurses were chattering all the time about their social arrangements and problems with their boyfriends, which were so legion that they sustained conversation throughout the night. He dared not ask them to pipe down because he was weak and dependent, and they could easily take their revenge on him in small ways. People do not take kindly these days to being asked to make less, let alone no, noise. They believe themselves to be invested with rights, chief among them being to do what they like regardless of others.

I regret to say that my own nation has become among the least disciplined known to me in the matter of making a noise, and the most ferocious in its defense of its own egotism. The English, it used to be said, took their pleasures sadly; now they take them loudly. As they walk through the streets in pursuit of their generally gross and unrefined pleasures, or after they have taken them, they scream and shout fit to wake people on life-support machines in a vegetative state.

I suspect that the noise they make is another expression of sadness, or at least of discomfort in the world; they are desperate to convince themselves and others that they are enjoying themselves hugely when in fact they are not, and the more noise they make, the better time they suppose that they are having. The women are worse than the men, or at least their voices are more penetrating; they sound as if they could be used for drilling tunnels or the dissolution of bladder stones. But God help you if you ask them, even obsequiously, to vociferate less loudly. At best, they suddenly turn political philosopher and demand to know by what right you ask them to do so. You are only one, and they are several, therefore what they want is what counts. All appearances and sounds to the contrary, it is vox populi, vox dei. All I can say is that, in that case, I don’t want to go to heaven.