Race: So Much More Than Skin Color 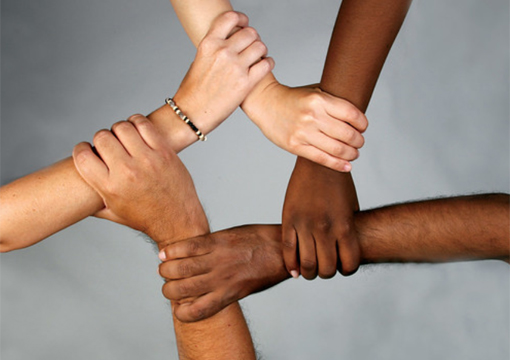 When I was but a wee cup o’ broth a half-century ago in a little working-class town outside of Philadelphia, we referred to blacks as “colored people,” which to me suggested that humans are all identical Barbie and Ken dolls coming down the same assembly line until a certain group gets shunted away to receive coloring. My inference was that the only difference between us all was the special added coloring that “colored” people received.

Just last week someone accused me of attacking blacks for their “skin color” when all I was doing was wondering aloud why the Powers That Be have a hard time coming to grips with all the anti-Jewish violence that blacks have been perpetrating of late.

Apparently this person’s reading comprehension was so poor that he didn’t realize I was only attacking the Powers That Be who compulsively lie about such matters and who only make racial animosity worse in the process. And he was apparently so incapable of independent thought that he blindly swallowed the easily discredited trope that “skin color” is the only difference between us all.

Because we are forced to parrot the transparent inanity that the only difference between us is “skin color,” whenever we hear about any statistical disparities between racial groups in America, we are only permitted to publicly blame such differences on “racism.”

Conveniently, this standard doesn’t apply to sports because the evidence for athletic inequality between the races is so overwhelming, one looks like a bald-faced liar for blaming those disparities on “skin color.” With blacks comprising only 13% of the population but accounting for 75% of NBA players and two-thirds of NFL players, trying to somehow blame this all on “white racism” makes one look ridiculous. And “skin color” can’t possibly explain such absurd levels of athletic over-performance.

What, then, might explain it? Is it possible that there are factors more reasonable and less emotion-laden than the phantom demon of “racism”?

“If you pay enough attention, you’d realize that ‘racism’ and ‘skin color’ hardly explain anything.”

Perish the thought that the main reason blacks dominate running competitions is related to innate genetic differences in their navel placement, bone density, leg length, hip width, testosterone, thigh thickness, and percentage of fast-twitch muscle. And don’t pause for a moment to consider that their relative lack of success in swimming, as well as a much higher propensity toward drowning, is related to their heightened bone density relative to whites.

These explanations seem perfectly logical and devoid of “hatred,” no?

Not according to the Egalitarian Gospel. Despite all the lip service paid to diversity, the biggest social crime you can commit these days is to insist that people are inherently different.

There are so many quantifiable physical differences between the races that it would be hilarious if you didn’t risk being socially destroyed for mentioning them.

The go-to alibis for such differences is that cultural and economic factors cause them. And I have never been one to deny that environment is a factor—it’s just that I’m also not the type to say genetics are never a factor. That’s where the radical egalitarians fall flat on their face.

According to the late and lamented J. Philippe Rushton’s “Statement on Race as a Biological Concept”:

Asians and Africans consistently aggregate at opposite ends, with Europeans intermediate, on a continuum that includes over 60 anatomical and social variables. These 60 variables include brain size, intelligence, sexual habits, fertility, personality, temperament, speed of maturation, and longevity. If race were an arbitrary, socially-constructed concept, devoid of all biological meaning, such consistent relationships would not exist.

Mongoloids, caucasoids, and negroids can be distinguished on the basis of obvious differences in skeletal morphology, hair and facial features, as well by blood groups and DNA fingerprints. Forensic anthropologists regularly classify skeletons of decomposed bodies by race.…In certain criminal investigations, the race of a perpetrator can be identified from blood, semen, and hair samples. To deny the predictive validity of race at this level is nonscientific and unrealistic.

A recent news story claims that black males are twice as likely to get breast cancer than white males, and authors found themselves incapable of ruling out “genetics” as a factor. Genetics also seem to be the likely culprit for another recent news story that claimed aspirin actually raised heart-disease risks for black males while lowering it for white males.

For the following litany of links, I will only include studies where researchers suggested a genetic link rather than environmental causes for demonstrable physical differences among the races, thus short-circuiting your conditioned response to yell “NURTURE, NOT NATURE!”

Despite what Stephen Jay Gould may try to tell you, studies have consistently found that Asian brains are larger than white brains, which are larger than black brains. Not so very coincidentally, these groups skew precisely the same way when it comes to intelligence tests. And Australian aborigines not only have the smallest brains of all hominids, they also have the lowest recorded IQs on the planet.

And do you really expect us to swallow that this is all explained by “racism” and “skin color”?

If it’s merely skin color and not, say, DNA, how are forensic technicians able to determine one’s continental ancestry through a simple saliva sample?

Skin color is hardly the most reliable predictor of continental ancestry, which is a term I prefer to “race,” because it’s specific and much harder to deconstruct. Scientists can tell if you’re of African, European, or Asian ancestry merely by examining your hair. Or your earwax. Or the bacteria in your mouth. Or your fingerprints. Or the folds in your brain.

If it’s all a matter of racism and skin color, why does sickle cell anemia almost exclusively affect blacks, while Tay-Sachs disease disproportionately affects Ashkenazi Jews? Why are whites the primary victims of cystic fibrosis?

How exactly did “racism” enable a quotient of Latina women to possess a genetic variant that protects them from breast cancer? How did white supremacy enable Hispanics to age more slowly than whites, even in the gringo-controlled USA? How does “skin color” make them more predisposed to fatty liver disease and blindness?

If skin color is the only difference, why are 90% of Northern Europeans able to digest milk, whereas hardly any Asians or Native Americans can?

How does “skin color” explain why Europeans tend to have a sweet tooth, while those of African descent are more sensitive to bitter tastes? How does it account for the fact that, on average, black Americans reach puberty much earlier than other groups?

If you actually believe in evolution—as most egalitarians apparently do, blind to the inherent contradiction of believing we all evolved into a permanent state of indistinguishable equality—you’d realize why Africans evolved an immune defense against malaria, indigenous peoples high in the Andes developed a partial immunity to arsenic, Tibetans developed an ability to subsist on low levels of oxygen at high altitudes, and that people who evolved in the Ganges Delta developed an increased resistance to cholera.

And if the only physical difference between blacks and whites is skin color, why do blacks’ heart plaque and dental plaque differ from that of whites? Are their elevated rates of hypertension and heart disease related to the fact that their aortas are more rigid than those of Caucasians?

Why do blacks have different facial mites and fingerprints than non-blacks? Why are they the only population on earth with no Neanderthal DNA?

Is it even remotely possible that genetics play a role in why their hearing is better than that of whites or why they suffer from far lower rates of Tourette’s syndrome?

Of course it is. You’d have to be an idiot to deny it. Problem is, there are a lot of idiots out there.

If you pay enough attention, you’d realize that “racism” and “skin color” hardly explain anything.