Race and Unreason in L.A. 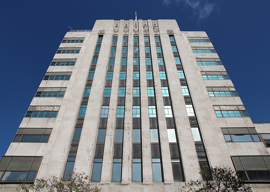 By any measure, the Los Angeles Times is a bad newspaper. Sure, it’s the fourth-largest paper by circulation in the U.S., but that’s akin to calling someone the fourth-least-terminal patient in the inoperable-cancer ward. Simply put, the Times stinks. I mean, this is a paper that once ran a page-one entertainment story complaining that the movie Twins was deceptive because Arnold Schwarzenegger and Danny DeVito don”t actually look alike.

Yet, as bad a paper as it is, the Times does possess one unique quality: a highly entertaining obsession with race. The Times can take any story, about any topic, and spin it to be racial. Accuracy and relevance are immaterial; all that matters is finding some way, any way, to cram some aspect of minority suffering or white devilry into every story. For example, last November, Times journalist and wise Latina Carolina Miranda felt the need to pause her review of a one-man Ben Vereen tribute show in order to remind her readers that the Republican Party “hadn”t historically had a warm relationship with African Americans.” Yes, “historically,” blacks never supported the party of Lincoln, emancipation, abolition, Reconstruction, antilynching laws, anti-Klan laws, and the Thirteenth, Fourteenth, and Fifteenth Amendments.

If you”re not reading the Times, this is the kind of incisive reporting you”re missing out on.

This month, however, it was Times readers who missed out. And what they missed out on was exactly the kind of thing you”d expect the race-obsessed Times to cover. “The Color of Wealth in Los Angeles“ is a groundbreaking report released several weeks ago by researchers from UCLA, Duke University, and The New School. Described as “the first report to compile detailed data on assets and debts among people of different races, ethnicities and countries of origin residing in the Los Angeles area,” you”d kind of expect the Los Angeles Times to give it, you know, a column inch or two.

But you”d be wrong. The study has not received a single mention in the Times. Now, why on earth would a newspaper that obsesses every day about evil whites and poor, oppressed, disadvantaged “people of color” ignore such an important, well-pedigreed study?

Might it have something to do with the study’s results?

To the Times, “white privilege” is as much a part of L.A. as the smog. So how do L.A.’s privileged whites rank in the new study? First? Second? Third? Try fourth. In terms of household median net worth, whites in L.A. rank behind Japanese, Asian Indian, and Chinese households. In terms of median total value of assets, whites also come in fourth after Japanese, Asian Indians, and Chinese. That’s the face of “white privilege” in L.A.”totally not white. And the L.A. Times? Totally not interested.

Several weeks ago I wrote about a 2001 study purporting to show that whites view Asians more negatively than they do blacks or Hispanics. “The Color of Wealth” is additional supporting evidence for the point I made in that earlier column”that “racism” from whites, to whatever degree it exists these days, is not an impediment to success by nonwhites. Even with all the “racism” against Asians detailed in that 2001 study, and even with all the “Islamophobia” that we”re told beats down Indian-Americans and keeps them cowering in dark rooms in fear of ignorant, hate-filled whites who think all Indians are Muslim, even in the face of all that supposed racial hatred, Japanese, Chinese, and Indians in L.A. still manage to be more economically successful than whites.

The war against whites and their “racist beliefs” is a pointless diversion waged by hate-filled, vengeance-minded social justice warriors who would rather spend their days hunting alabaster bogeymen than building successful lives for themselves and their families. Even if whites are as incurably racist as the Black Lives Matter bozos claim, so what? The “Color of Wealth” report proves that nonwhites can still succeed, and “white privilege” does not guarantee whites jack spit in terms of a place at the top of the wealth-accumulation pyramid.

The study credits “selectivity in immigration” (that’s the actual term the authors use) for the great successes of Indian-, Chinese-, and Japanese-Americans. Wait, isn”t that kind of what Trump is calling for? Take in the best, most skilled, most hardworking immigrants, and keep the layabouts and criminals out? Here we see an(other) leftist internal contradiction. It’s quite routine for “progressives” to decry “selective immigration” as racist. Yet according to the “Color of Wealth” study, “selective immigration” creates wealthy and prosperous nonwhite communities. How in the world is it racist to pursue a policy that gives nonwhites an affluence that surpasses that of whites? I thought racism meant keeping nonwhites poor and disenfranchised. Apparently, now it also means making them rich and empowered.

Keep in mind, though, that this is a study prepared by researchers at Duke, UCLA, and New York’s New School. The results might be conservative-friendly, but the analysis isn”t. The authors are dead set on pushing the myth of “lateral mobility,” the belief that when you immigrate to the U.S., you remain forever stuck in the economic class in which you arrived. Nothing”not hard work, culture, or education”can change your status. You come here rich, you stay rich. You come here poor, you stay poor. “Upward mobility,” the study claims, is a lie. By pushing this line, the authors can have their cake and eat it, too. Selective immigration might create strong minority communities, but America still sucks, because there’s no opportunity here, only stasis.

In the report, one of the authors, Duke’s Dr. William Darity, cites Jews as an example of lateral mobility. U.S. Jews, the professor claims, remain to this day in the same economic class as their immigrant ancestors. Well, I know a thing or two about Jews, and knowledge is for sharin” (I learned that from Barney the Dinosaur). So I contacted Professor Darity:

I”m Jewish on both sides of my family, and all mobility has been upward, to a very great extent. My family arrived working-class poor; everyone today would qualify as upper-middle class or upper class. Is my family’s story really that unique? I”d love to know if there are any statistics upon which you base your claim.

You raise a great question. It also happens to be one that I”ve devoted substantial thought over the years. For Jewish immigrants in the early 20th century in particular their previous class position was masked by their income poverty upon arrival in the US.

Dr. Darity attached a lengthy paper he had coauthored on the topic. It’s clear that the experiences of early-20th-century Eastern European Jewish immigrants don”t jibe with the theory of lateral mobility, so the authors of that paper make it jibe by redefining middle class so that it encompasses impoverished shtetl tradespeople. If you possessed valuable skills, the paper argues, that alone made you middle class, in spite of income or net worth or social standing. I didn”t buy it. I responded to Dr. Darity:

Indeed, there were many skilled tradespeople among Jews who emigrated to the U.S. from Eastern Europe. But if we”re discussing class or social status, I don”t see any possible way in which those Jews would be seen as anything other than lower/working class. I think it’s a huge stretch to say that the majority of them were middle class, and a further stretch still for anyone to suggest that being skilled in a trade by itself signifies membership in the middle class.

Dr. Darity replied that even though those immigrants did indeed “arrive in poverty,” they brought with them something that “made” them middle class: literacy and education. Unfortunately, here Dr. Darity steps on his own tail. In “The Color of Wealth” he dismisses culture as contributing to the success of immigrant groups, yet surely the importance placed on literacy and education among even the poorest European Jews was a cultural thing. Darity also grades on a curve, suggesting that Russian Jews would have been middle class if not for czarist anti-Semitism. But that’s pure conjecture. What we know is that many of them arrived here poor, and now their descendants are not poor. That is upward, not lateral, mobility. I commend Dr. Darity for engaging with me on this topic, but I remain unconvinced that lateral is the only kind of mobility immigrants to the U.S. can expect.