Race Cost Her the Race 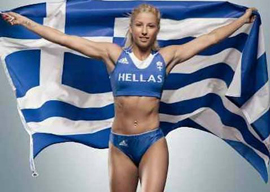 Voula Papachristou isn”t all Greek to me.

What I mean is, the triple-jumper’s blonde locks look downright Swedish. My experience with Hellenic femininity begins and ends with Toronto’s Danforth Avenue, where the wide-bodied waitresses toiling beneath Greektown’s blue-and-white cafÃ© canopies display hair that’s considerably darker (and more, shall we say, widely distributed).

I loathe the Olympics, so I”m only familiar with Papachristou because the Greek athlete was expelled from the Games just before they began for Tweeting this “racist” joke:

With so many Africans in Greece… At least the mosquitoes of West Nile .. will eat home made food!

I”m impressed. Along with being decidedly hirsute, those Doric damsels up on “the Danforth” aren”t renowned for their Delphic outbursts. Voula’s comment therefore comes as a pleasant surprise, cleverly comparing the unloved migrants swarming her homeland to literal bloodsuckers.

It’s pretty rich watching Eurotrash athletic officialdom condemning a lowly member of their EU cohort for racism. After all, this same species of international sports overseers regularly shrugs off such edifying spectacles as “monkey chants,” banana-throwing, and anthem-jeering.

And that’s just some soccer stuff from this year alone.

Papachristou’s supporters countered without success that the poor girl’s joke was directed at a “nationality,” not a “race” at all. Other pedantic appeals cited the very “Olympic Creed“ Papachristou had supposedly violated, which says a grand total of nothing about an athlete’s political views.

And make no mistake: It was Voula Papachristou’s voting habits (revealed in earlier Tweets) that ultimately cost her the opportunity to live out her lifelong dream. Almost every news story about her ouster mentioned her alleged support for Greece’s “anti-immigrant” Golden Dawn Party.

Golden Dawn’s hostility toward newcomers supposedly violates the spirit of the Games. Never mind that the Olympics pit nation against nation, and so a patriotic Greek should be forgiven for daring to wonder when Greece will stop being Greece, given the steady influx of those officially referred to as “foreigners.”

Toronto’s Danforth embodied the emigration wave from Greece to Canada that peaked in 1967. Today, Greece is on the receiving end of immigration that includes thousands of African migrant workers. Hence Papachristou’s Tweet.

In other words, so far these immigrants make the same “contributions” to their new homes that make Black History Month the world over seem three weeks too long.