Race of the Amish 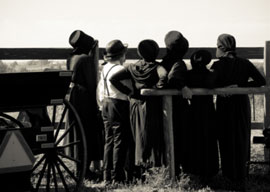 The conventional wisdom about how race is just a social construct is back in the news with the endless excoriations of Nicholas Wade’s A Troublesome Inheritance: Genes, Race, and Human History. Sadly, the term “social construct“ is usually used as an excuse to stop thinking: just announce that scientists have proven that race is socially constructed and you can shut down all cognitive processes without worry that you”ll get in trouble for crimethink.

Yet, as with all thoughtful considerations of nature and nurture, the notion of “social construction” can yield fruitful paradoxes. If social construction is as powerful as its enthusiasts claim, how could it not affect human beings genetically? If a social group constructs a new ideology about who should marry whom, for instance, how would that not alter future lineages and gene frequencies?

For example, America has witnessed over the last ten generations the socially planned breeding of a new endogamous extended family, a fast-growing proto-race that now numbers over 200,000 and is currently on pace to double every 21 years: the Amish.

And, judging from how spectacularly well the Amish have weathered the last half-century’s fertility-depressing social revolution in the surrounding “English” culture, they seem to have a clear flight path to numbering in the millions before the end of this century.

“The idea of the Amish as a racial group might appear bizarre to 21st century American minds, but that mostly shows how provincial our thinking has become.”

The idea of the Amish as a racial group might appear bizarre to 21st century American minds, but that mostly shows how provincial our thinking has become.

Because groups from different continents settled America, it’s easy for contemporary Americans to associate race with merely the big differences seen among peoples who were long somewhat isolated by oceans, mountain ranges, deserts, and trackless steppes.

Yet 19th century Americans also remained cognizant of critical differences within continents: for instance, Italians, Scots, and Swedes tend to handle their alcohol differently. While Italians were more likely to ruin their livers than their lives by drinking a bottle of wine with meals, Swedes had a tendency toward occasional heroic binge-drinking bashes. My father-in-law recalled an old figure of speech in Chicago: “as drunk as seven Swedes.”
To a 19th century American, the Book of Genesis provided a vivid example of how a nation is bred: through inbreeding. According to the lurid family history of Abraham’s descendants, the dozen sons of Jacob, the founders of the Twelve Tribes of Israel, had only six unique grandparents instead of the usual eight.

Like most Christian sects with German roots, the Bible-reading Amish were familiar with the Jewish origin stories. They wound up with a social system somewhat like that of the Ashkenazi. Like medieval Jews, the Amish are content to “dwell apart” in the midst of outsiders without having their own state or territory, using ostracism (“shunning”) to enforce their norms, and encouraging high fertility.

Like modern ultra-Orthodox Jews who dress in fashions hundreds of years out of date, the plain clothes of the Amish are perhaps more profitably interpreted less as exercises in religious fanaticism and more as the canny choices of clever leaders constructing the kind of cultures and human beings they most value. The arduous customs of both groups served to exclude the casual and construct barriers to intermarriage.

I had always assumed that the Amish had a religious objection to modern technology, but driving around Ohio’s Holmes County last year, it became clear that their views on technology are more instrumental. For example, most yards had brightly colored plastic children’s outdoor toys such as slides. Plastic toys are a modern invention, but the Amish don”t reject them out of hand for that reason. Instead, they pick and choose the technologies they believe mold the type of people they prefer. (Not surprisingly, the Amish, like the ultra-Orthodox, sometimes fracture into new congregations when charismatic leaders disagree on the right path.)

But there are clear differences between the Amish and the ultra-Orthodox Jews as well, such as the Amish being intensely agricultural rather than commercial.

The Amish opted out of the productivity revolution. Farming efficiency has increased radically over American history, which is, on the whole, a terrific thing. Nobody needs to conquer their neighbors anymore to get enough calories to eat because of the huge increase in what can be produced per acre and per farmer.

But that’s left America’s farm regions rather lonely. Drive across the country and you”ll see lots of farms but very few farmers … except in Amish regions, which look lively and sociable. There are numerous people around, both doing backbreaking labor in the fields and having fun with friends and family.

The genealogies of the Amish, who have long been literate but not highly educated (eighth grade is considered enough), are well documented on the flyleaves of their family Bibles. They are descended from about 200 ancestors who immigrated from Germany and Switzerland, mostly in the 18th century. Immigration continued in the 19th century, but most of the European newcomers merged into the less hardcore Mennonite churches.
The fairly distinctive genetic signature of the Amish is increasingly studied.

The Amish fight their congenital diseases caused by inbreeding by encouraging courting among their less closely related members. (Unlike the ultra-Orthodox, who battle hereditary diseases such as Tay-Sachs via eugenics, the Amish don”t arrange marriages.) This practice has the paradoxical property of making the Amish more genetically homogeneous.