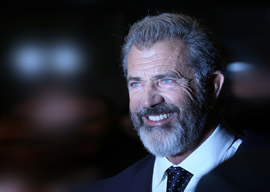 Mel Gibson is back, and that’s bad news for the Jews! August 25th marks the release of Gibson’s much-anticipated “comeback” film, Blood Father, in which the former A-list, boffo-box-office romantic lead takes the Breaking Bad approach to mending a soiled image, portraying a gruff desert-dwelling tatted-up trailer-trash loser who battles drug dealers for some reason. This film will surely give Mel a better chance at redemption than the one in which his character spoke through a beaver hand-puppet.

Now, when I say that Mel’s big comeback is “bad news for the Jews,” my intent is not to claim that Gibson is an anti-Semite whose success is somehow bad for my fellow world-controlling Hebes. Rather, what I think the more thin-skinned among my tribe might find alarming is the manner in which the comeback battle is being waged. Mel (or one of his “people”) has cannily jabbed a finger skyward to gauge prevailing winds, and it has apparently been determined that the entire crux of Mel’s comeback hinges on blaming the Jews.

Again, I”m not suggesting that Mel is an anti-Semite. A good decade ago, I was invited by Mel’s “eccentric” father, Hutton, to produce a documentary about the Gibson family. The Gibsons hold fast to an ultra-strict traditionalist form of Catholicism, and, to that extent, the Gibsons consider everyone outside their sect to be hell-bound losers. As Hutton explained to me on camera, the Gibsons “hate” Jews no more or less than they “hate” mainstream Catholics and all Protestants, Muslims, Hindus, and Buddhists. Mel’s problem isn”t hate but alcoholism, and it was during one night of DUIing down Pacific Coast Highway that the first cracks appeared in Gibson’s nice-guy persona. I”m sure most of you have probably seen some version of a particular social-media meme that, for the past few years, has been huge among those who are, how shall I put it, not B”nai B”rith donors. The meme shows a photo of Mel alongside either Roman Polanski (Jew!) or Woody Allen (Jew? I”d never have guessed), and the caption reads something like “Mel Gibson insulted the Jews. Penalty? HIS CAREER WAS DESTROYED! HE NEVER WORKED AGAIN! Polanski/Allen RAPED A GIRL. Penalty? LONG AND PROSPEROUS CAREERS!”

You”ve probably seen it. Lord knows I”ve come across it enough in my Facebook feed. Well, Mel (or his “people”) has probably seen it too, and the Gibson comeback consists entirely of aping that meme, albeit with a bit more subtlety. Mel dared to say some “offensive” things about Jews during that traffic stop in 2006, and as a result he was blacklisted (by, you know, “them”). I”ve been keenly following the “comeback” stories that Mel’s people have managed to get in the press, and they all draw a direct line between the 2006 PCH stop and Mel’s exile from Hollywood. Just like the meme says.

“It’s better to claim victim status at the hands of the big bad Jew than to remind people of the time you beat your girlfriend for not blowing you.”

Except there’s just one problem…that claim, like the meme, is full of shit. Mel’s career totally survived the July 2006 “Jew” incident. He went on to release Apocalypto in December of that year, and it was a massive hit. He produced the TV series Carrier. He starred in the Warner Bros. film Edge of Darkness, and he continued to make appearances on all the major TV talk shows, including The Tonight Show, Ellen, Jimmy Kimmel, and the short-lived Jay Leno Show. In fact, in his first Tonight Show appearance following the “Jew” incident, he received a standing ovation from the audience.

The bottom line is, he survived.

What he didn”t survive was the summer 2010 release of recordings made by his then girlfriend Oksana Grigorieva, in which the extremely intoxicated star not only admitted to having beaten Grigorieva, but he straight-out threatened to put her body “in a fucking rose garden, you cunt.” He told her she “deserved” to be beaten, and he expressed his wish that she be “raped by a pack of niggers” (what a “cuck”).

That’s what killed his career. Not the 2006 “Jew” incident, but the 2010 recorded phone calls. There’s no question that Grigorieva was baiting him, but it’s a simple fact that one cannot continue with a career as a romantic lead once female moviegoers hear the kinds of things that were on those tapes. “Oh, Mel, he’s so dreamy! He beat up his girlfriend because she wouldn”t “just fucking smile and blow” him. Two tickets for What Women Don”t Want, please!” Now, I have all the sympathy in the world for my fellow alcoholics, and I have personal experiences that give me empathy toward men whose lives are ruined by bitter exes. But reality doesn”t care if you acknowledge it or not, because reality always wins in the end. And reality dictated that those recordings could not have done anything but destroy Gibson’s A-list romantic-lead status.

So back to Mel’s finger in the wind. He knows quite well that the best road to career rehabilitation is the one that goes straight from 2006 to today, with no inconvenient stops in between. It’s better to claim victim status at the hands of the big bad Jew than to remind people of the time you beat your girlfriend for not blowing you. Gibson is doing the smartest thing he can by throwing the kikes under the bris and putting it all on them.

When Business Insider’s lapdog entertainment reporter Jason Guerrasio, who, one can assume, scores his Gibson-related exclusives by dutifully repeating all the approved talking points, echoed the “PCH incident led to the “blacklisting”” line, he straight-up lied by claiming that Gibson hadn”t starred in a studio film since the drunken anti-Jewish outburst. Guerrasio refused to correct his piece, forcing me to go over his head to entertainment editor Paul Schrodt, who apologized and inserted a correction. Guerrasio’s stubborn refusal to back off from a lie underscores just how important the false narrative is to Team Gibson.

Modern-day America is crammed full of people in need of rehab. And no, I don”t mean because of addiction. I mean people with soiled reputations, people who”ve sinned, people who”ve stepped in it. Many of these people lost everything because of speech. We live in an age in which a single tweet can destroy a person’s life. But for people like that, redemption can be found. It’s much easier to be rehabilitated for speech crimes than for (to paraphrase Whoopi Goldberg) “crime crimes.” When I was “outed” as a Holocaust revisionist, a Republican former friend of mine, Daniel Knauf (producer of the hit NBC series The Blacklist), told a documentary filmmaker that the revelation of my revisionist past was as bad as if I”d been on the “Megan’s List” of registered sex offenders. Knauf was smart to go there (foul and contemptible, but smart). By relating my “crimes,” which involved only speech, to sex crimes, Knauf made it easier, mentally, for so-called “free speech conservatives” like him to blacklist me (an irony, considering his show’s title).

Conservative author, filmmaker, and radio host John Ziegler, director of the documentary film Media Malpractice, has narrowed down what he believes to be the three topics most likely to create the kind of mainstream-media firestorm that can doom a person to exile, possibly for the rest of their life: the “three deadly Rs””racism, rape, and Republican (for the purposes of this piece, I”m counting charges of anti-Semitism as “racism,” and I”m putting accusations of sexual violence or misconduct into the “rape” category). Mel Gibson’s sins fall into rape and racism. Wisely, he’s working overtime to make sure the public focuses only on racism. I had two categories too”racism and Republican, although Danny Knauf creatively tried to squeeze in some rape. Sadly, it didn”t catch on (in a recent email exchange, Knauf expressed mild regret at his “Megan’s List” cheap shot), thus depriving me of a perfect trifecta.