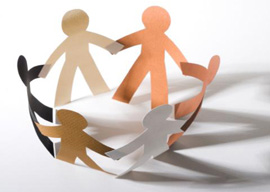 I tried to go into the 2012 American Renaissance conference without prejudice, but it was difficult. I’ve been taught since childhood that whites can’t be white together without the streets running red with blood. Look at NASCAR, punk rock, or ice hockey.

Everyone knows that only racists promote a positive white identity, and I agree. African, Latino, Asian, Arab, Persian, Indian, and Native Americans who openly celebrate their own heritage”well, they’re racists, too. Anyone who embraces, denigrates, or even notices another person’s race is a racist in my eyes. Come to think of it, I don’t know anyone who isn’t a bit racist. Race-deniers are total racists for disregarding someone else’s heartfelt racial identity. So I wasn’t surprised to find racists at the AmRen conference. I was surprised to find intelligent racists who can discuss race in a civil tone.

This is the first time in three years that AmRenegades have been allowed to gather in the same room. Their last two conferences were canceled after venues received continual harassment. Detractors applied pressure once again this year. According to a newsletter circulated by the “anti-fascist” One People’s Project:

Anywhere [AmRen founder] Jared Taylor and his followers gather and organize, violent crime inevitably follows. If you live in Tennessee and are a decent person and this conference is allowed to occur, you will find your neighbourhoods considerably less safe.

“Anyone who embraces, denigrates, or even notices another person’s race is a racist in my eyes.”

Judging from the battered white faces displayed like hunting trophies on OPP’s website”and their triumphant announcement that white supremacist Dick Barrett was murdered and set on fire after allegedly making sexual advances on his black yard worker”it is clear who the victims are supposed to be. Watch your back, whitey.

So what’s all the fuss about? Is mixing Caucasians, coffee, and conversation as dangerous as combining ammonia and bleach?

The AmRen conference proceeded with the same decorum one would expect of any academic symposium. It was devoid of uncouth observations and loutish slurs.

This year’s multicultural event featured globetrotting novelist Alex Kurtagic, British android Richard Lynn, and the wild-eyed Frenchman Guillaume Faye, among others. The young bucks were on fire with determined optimism while the gray-tops conjured images of civilization swirling around inside a cracked toilet bowl. The overall vision was distinctly dystopian: a white sub-species on the endangered list with no greenie do-gooders coming to their rescue.

Alex Kurtagic took the podium dressed like he’d just stepped out of a Tim Burton film. He laid out the project of remaking Western Man with poetic flourish. “Let him die and be reborn!” He warned white advocates to avoid sounding like whining old men overly obsessed with IQ studies that “flatter their vanity.” Instead, Kurtagic emphasized the importance of positive cultural expression”art, music, and literature”and the need for “moral force” in white racial consciousness. Western man, he declared, must assert his white identity with a clear conscience. It isn’t often that you see a standing ovation so early in the morning.