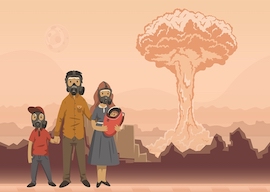 An essential element of all postapocalyptic movies is the “precious object.” This is the thing that either the good guys are trying to find, or the bad guys are trying to steal or exploit. In The Road Warrior, the precious object was gasoline. In Thunderdome, it was pig shit (to make methane). In Fury Road, it was water (as it was in the low-budget Filipino mess Stryker). In Def-Con 4, it was a map to the last remaining radiation-free zone on earth. In The Road, it was food, in The Book of Eli, it was the Bible, and in Waterworld, it was dry land.

Misogyny is a frequent theme in dystopian dramas, from The Handmaid’s Tale to Gene Roddenberry’s lamentable 1974 misfire Planet Earth, in which women rule a war-ravaged world, forging a peaceful utopia while battling a chauvinistic all-male army led by the nefarious “Commander Soldier” (yes, Roddenberry literally wrote a character named “Commander Soldier”). In After the Fall of New York, the precious object was the last remaining fertile woman (Fury Road also dealt with captive concubines). In Spacehunter, it was the life force of bimbo fashion models (I’m so not kidding about this; the cyborg villain lives by sucking the life out of Valley Girls. And no, it’s not a comedy).

The point is, there’s no shortage of writers who’ve envisioned a future in which sex, sexism, and other gender-related issues continue to exist.

But you know what’s conspicuously missing from the dystopia genre? Race. No one likes to write stories of a future world in which race is still a thing. Why? Why is it easy to believe that the battle of the sexes will continue after a nuclear war or a devastating plague, but racial tensions will somehow vanish? It’s the Lathe of Heaven principle, the belief that in the future we’ll still have every current social ill except racism (in The Lathe of Heaven, author Ursula Le Guin presents an ashy future in which all humans have become the color gray).

I’m not the only one to notice the absence of race from dystopian fiction. Vulture’s Angelica Jade Bastién was wringing her woke African-American hands about this issue a year ago. She lamented that the dystopia genre “often refuses to acknowledge race altogether. In these future worlds, classism and sexism continue to flourish,” while racism is usually portrayed allegorically (as in District 9’s internment-camp aliens). “How can films create honest dystopian worlds if they ignore the racial strictures that make these narratives possible in the first place?” Bastién asked, adding:

Fantasy novelist Daniel José Older sees the problem as a failure of imagination and craft. “I find it very telling how these worlds that are so much about power and oppression and ways of resistance also magically somehow have solved race,” he said.

“No one likes to write stories of a future world in which race is still a thing.”

Olé, José, you are 100% correct. Why do most writers envision a future in which race no longer matters? Well, in part, it’s because the left appears rather confident that we’ll all soon be Le Guin’s uniform gray. Intermarriage and interbreeding will eventually settle the problem of racism for good, we’re told. So reluctant are sci-fi writers and filmmakers to portray a dystopian future plagued by racism, Philadelphia Experiment II, which depicts an alternate universe in which the Nazis invaded America and won World War II, features as its female lead the stunning mixed-race Amazon Marjean Holden. So in an America ruled by literal Nazis for forty years, miscegenation still marches on, and the Nazis, who last I checked were a tad bit racist, are totally cool with it.

The movie Children of Men (based on the novel by P.D. James) kinda dealt with race, but in an idiotic way. Mexican director Alfonso Cuarón decided to shoehorn a racial element into his adaptation of a book that contained no such thing. The story details a bleak future in which mankind has become infertile, but in Cuarón’s film, racists spend their days battling immigrants of color (think Camp of the Saints, but with the immigrants as the good guys). You know why James’ book lacked that plotline? Because it’s idiotic. Most hardcore racists are obsessed with the future of “their people.” If mankind is dying out, if there’s no future for anyone, what the hell does race matter anymore? “We must secure a future for white children” depends on there being both a future and children.

As The Atlantic pointed out, in James’ book, whites welcome immigrants, as all that matters to the final generation of humans is being catered to by cheap foreign workers who do the menial tasks and attend to the needs of those who realize that they might as well run out the clock in comfort. Ironically, Cuarón tries to deal with race in one of the few dystopian stories in which it makes sense for race not to play a role.

Now, in our actual future, race will indeed continue to matter. Regardless of how much interbreeding there is, all the variants will still exist. Yeah, we may have a lot more people who look like Marjean Holden, Dean Cain, and Cardi Minaj (no, I’m not mixing up two people there; I defy anyone to tell me that those two talentless bozos are not the same person), but we’ll still have the Yaphet Kottos and the Taylor Swifts. So if we establish that race is not going away, the question then becomes, to what degree will it play a role in human affairs?

Present-day South Africa offers a putrid, I mean petri, dish to examine. It’s a formerly white-run nation now in the hands of a nonwhite majority. As The Guardian gleefully points out, nonwhites will be the majority in Europe and the U.S. by 2050. South Africa, of course, was always black-majority, but it’s as close as we can come at the moment to assessing the condition of whites once they fall from power.

About six months ago, I helped a director friend cast an indie film, and I was amazed at how many stunning, blond South African actresses are willing to pay their own way out here if they can get a work permit (seriously, guys, stop messing with those shifty Russian mail-order brides. You want a green-card babe, look to South Africa). Most of the South African actresses I encountered already had many acting credits in their homeland, because even machete-wielding Zulus like ogling white chicks. In fact, an exhaustive 2012 study headed by the University of Pretoria’s Dr. Vinet Coetzee found that even among black Africans, light skin is considered the gold standard of beauty. And while some may dismiss such findings as the by-product of “white colonialism,” were that the case, one would expect that the African nations with the highest incidence of skin bleaching among blacks would be ones that had experienced white rule. But no. Nigeria leads the pack when it comes to facial whitening, with a whopping 77% of Nigerian women using bleaching products. Nigeria was indeed a British possession for many decades, but not in the sense of being colonized with settlers. The Brits relied on pliable native leaders to protect their interests; there was no attempt to flood the country with whites. Nigerians didn’t grow up as second-class citizens to those with fairer skin, so their preference for said skin is not the result of “brainwashing.” It’s just a fact…lots of people consider light skin beautiful.

Here’s my point: As white nations become majority nonwhite, white skin will more and more become a commodity, something to be traded, sold, exploited. Something to be simultaneously hated and sought after.

And here’s the truly dystopic part. As South African whites become increasingly disenfranchised, they’re learning to exploit their skin color in order to survive. In 2013, the BBC reported that as many as 400,000 South African whites now live in below-the-poverty-line squatter camps, the worst of which are in and around Pretoria. Faced with no future and few prospects, some of these white families are making money by loaning out their children to pedophilia sites, which are allowed to exist by a black-run government that has no interest in protecting white kids. My on-the-ground South African source, who’s fighting a losing battle to expose the exploitation of children in her country (and who wishes to remain anonymous due to concerns about government reprisals), told me about a vile site called FightingKids.com (no, I’m not linking to it). The site allows wealthy pedophiles from around the world to order custom videos of poverty-stricken white children (boys and girls, but mainly boys) boxing and wrestling half-naked. The pervs can choose which children they want to pit against each other (and how little they should wear), and they can decide if they want the kids to fight for real, or “play-fight” in a sexualized fantasy setting. The site, based in Bronkhorstspruit (outside Pretoria), brags that the money the pedos pay goes to help these impoverished white kids buy “clothes and bikes.”

This is Quentin Tarantino’s fictional “Mandingo fights” from Django Unchained, but in real life and with the races reversed.

The South African government refuses to take action against the site. So what if some white kids are being exploited? The Tshwane police force (Tshwane is the metropolitan district encompassing Pretoria) is led by blacks, and who wants to place a bet on whether any of these totally not-corrupt cops are getting a kickback from the FightingKids pedo lucre?

Notorious German child rapist Markus Roth has admitted to using the site to molest boys. But while our benevolent internet overlords are busy shutting down anyone and everyone who is even remotely right-of-center, the FightingKids site is allowed to continue (this is not “dark web” stuff; this is out in the open). No objections from Google, Facebook, or Twitter. Indeed, the latter two happily host pages promoting the site. So, you can be banned from Facebook or Twitter for saying, “Yay, Trump,” but not for coercing children with “clothing and bike money” into acting out the violent fantasies of pedophiles.

This is a dystopia that no futurist envisioned, one that is all about race. Disenfranchised white South Africans, fast becoming the lowest rung of a crumbling ladder, are using the one thing they have—their “European beauty standard”—to survive. Some are doing it by legitimate means (trying to land acting gigs in the West), others by means that in a healthy, civilized nation would be illegal.

So what does this teach us? It teaches us that in the dystopian future we’re likely headed toward, race will indeed still matter. In this nonfiction nightmare, white beauty will be the “precious object” that some seek to sell, some seek to buy, and others seek to exploit. Present-day South Africa is showing us that the authors of dystopian fiction do indeed lack imagination when it comes to envisioning the role of race in the future.